About an hour’s drive north of Whistler, British Columbia on 99 is popular Joffre Lakes Provincial Park. Another gorgeous stretch of the Sea to Sky Highway, there were tons of little – and not so little – waterfalls along this part of the road. This one was just sitting there unmarked, a plain old, boring part of the scenery! 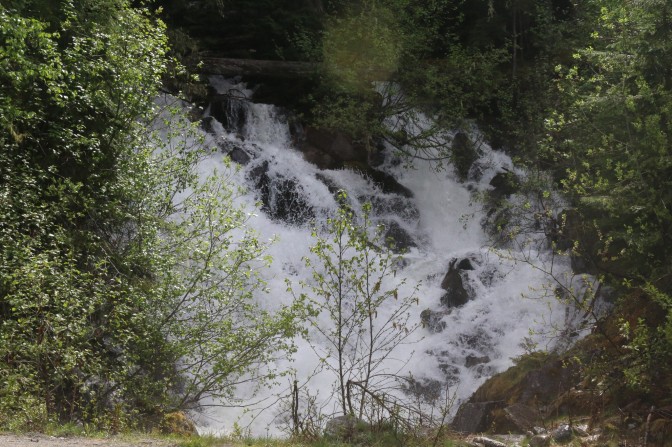 We had a little more excitement trying to get there (with the trailer in tow) after we and our GPS missed a turn to stay on 99 and we got a tour of some forest service roads to get back to it. I wish I could recall exactly where this happened, but the sign was very inconspicuous and it was at a point where straight ahead looked more like the major highway.

Once we reached the parking area, it was not the easiest of manuevering for a travel trailer rig, as it was a long but somewhat narrow elbowed parking lot. Luckily, the owner of the vehicle that was most obstructing our turnaround was nearby and offered to move. After that, we were okay to turn around and park along the edge.

The hike in this park is very popular and for good reason. The trail is approximately 6 miles (10km) round trip, out and back, with 1300 feet (400m) in elevation gain to three gorgeous alpine lakes known for their spectacular glacial silt-painted colors.

It was a quick jaunt out to the first lake, which is where many people cruising through stop to peek at the lake and Matier Glacier across the way. There was still a decent amount of melting snow and ice remaining on the trail in early June, making it a little more work to get to the first lookout for quick visitors, but it really wasn’t bad at all if taken slow. 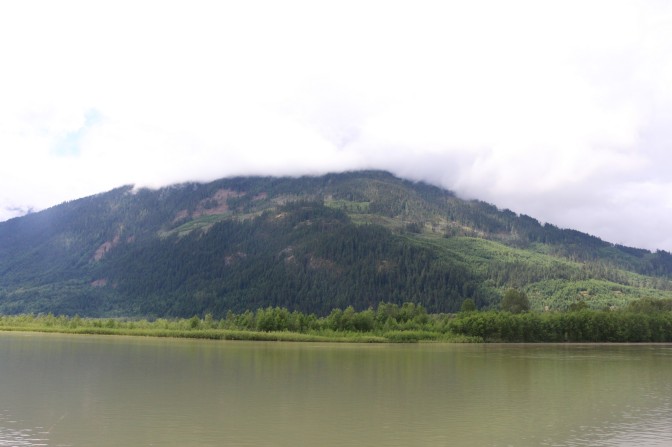 From here, the path briefly followed through more woods, where even the puddles were beautiful! 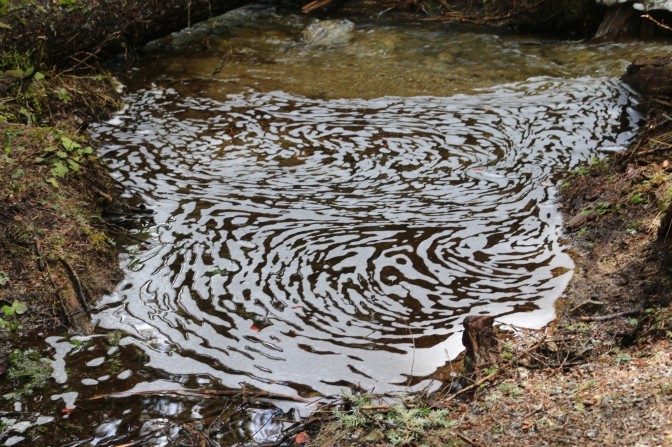 The trail then opened up to views of the valley and a beautiful stream that passed under the trail. 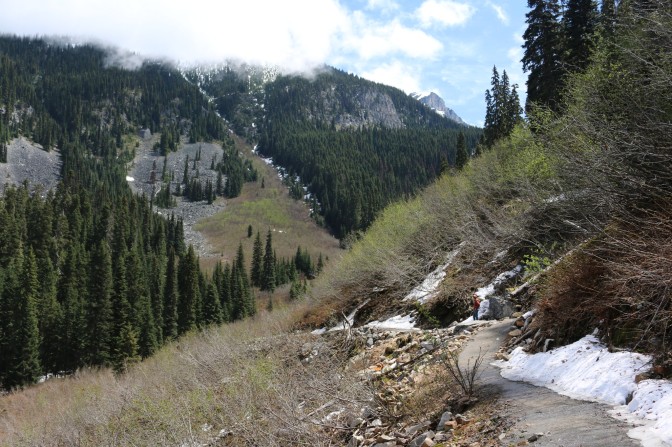 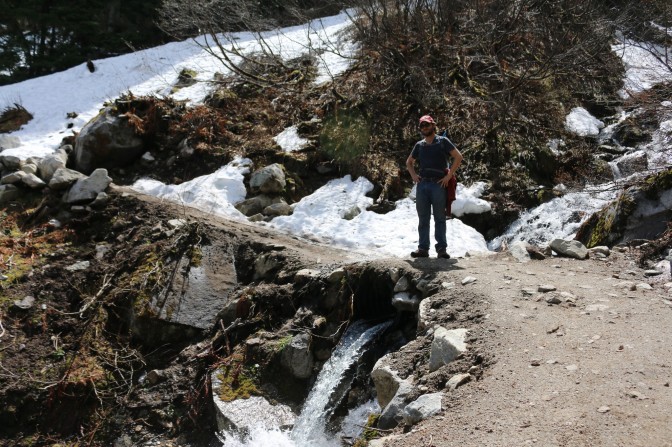 We then climbed some wooden stairs and slightly steeper (some still snow covered) sections until it descended a bit and flattened to give way to Middle Lake. It was on this stretch that I learned firsthand what postholing meant as I strayed from some of the hard pack snow and made my own nice little three foot hole. John came back to help me out of it…once he could stop laughing, anyway…

The Middle lake was super clear and a gorgeous deep green that photos can only attempt to replicate. We relaxed here for a bit before continuing on to the Upper Lake.

Upper Lake is only about ten or fifteen minutes past the Middle Lake and there is a waterfall to check out in between. That’s a lot of reward for the effort! This was probably the most challenging stretch of the trail, but it still wasn’t bad at all as long as we took our time in the snow. There were some beautiful wood carvings of animals to admire along the way, too. 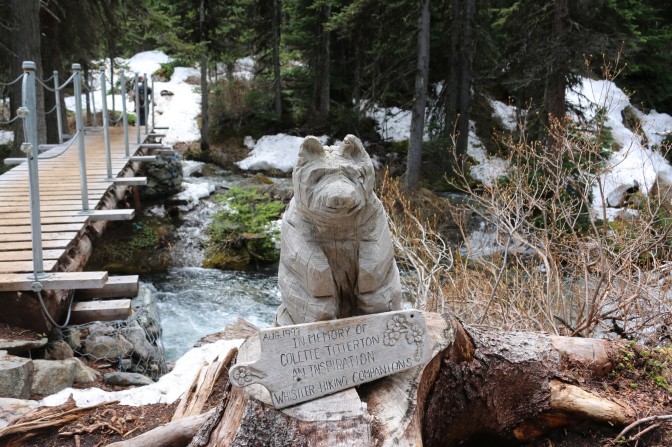 Someone had told us earlier in the day that the Middle Lake was the prettiest of the three, but we thought Upper Lake, which was still mostly frozen over at the time, was breathtaking. We spent a good amount of time up here despite the chill in the air just to take in the atmosphere of this area that had suddenly transported us into a summer winter wonderland of sorts. We only had to be mindful of where we stepped as it was hard to tell where the snow covered land ended and snow covered lake began. 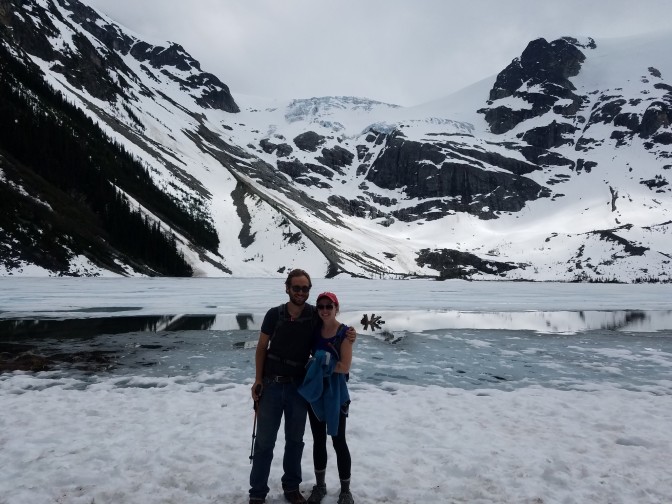 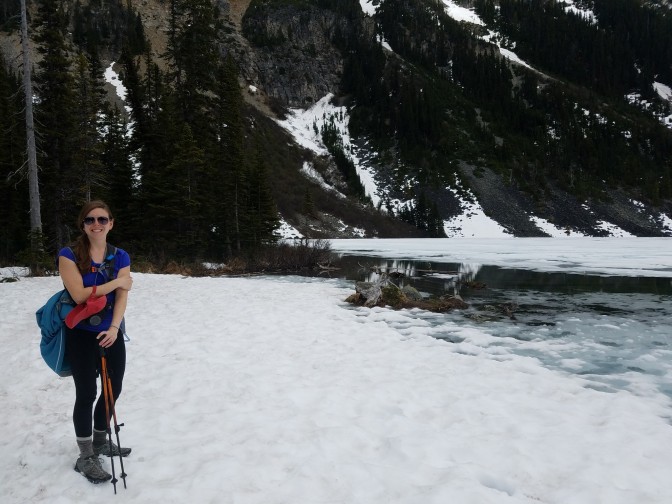 Our photographer here was a young woman from Ontario. We found it funny that it seemed every Ontarian we met in Canada was like, “Oh, Philadelphia! That’s not too far from me!”, even though when we’re home, the 8 hours to Toronto seems so far away. Distance is definitely relative!

On the way back, I dropped one of my trekking poles through an opening between slats in the foot bridge over the fast moving creek. It was luckily stopped by a nearby rock and I was able to fish it out with the other one. Postholing, fishing, falling on my butt – I like to keep it interesting when I hike!

Otherwise, the way back was a repeat of the superb scenery we’d seen on the way up. The drive from here to Lac La Hache Provincial Park (along 97) was another story. Besides seeing our first couple of black bears cross the road, this stretch gave us some of the most jaw dropping scenery we’d seen in a year of cross-country traveling. Trust me when I tell you the photos don’t do it any kind of justice! B.C. was exceeding our expectations for sure… 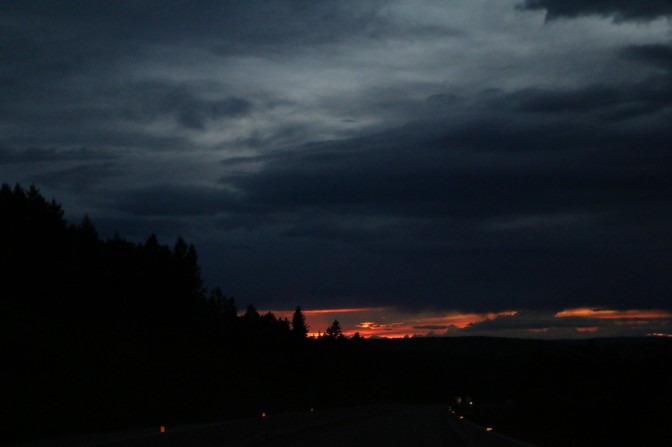