Despite being closer to the gate to Island in the Sky District of Canyonlands, we spent our first two days based out of Horse Thief Campground visiting Arches National Park – which was about a 35-minute drive away. I had developed some blisters on my feet, I think from some combination of jumping back into long-ish hikes pretty quickly, my shoes constantly being filled with desert sand, and having to put pressure on unusual parts of my feet to balance on a whole lot of slickrock. They weren’t painful and didn’t seem to be a big deal until halfway through our second day when I may have pushed myself a little farther than I should have so that we could see Delicate Arch at sunset before road construction would make this impossible for the following five days…

Hence, when came time to do the northern portion of Canyonlands, I was pretty much limited to what I could do in flip flops – a real bummer because I had really been looking forward to doing one of the hikes that takes you to the bottom of the canyon. But we still found no shortage of scenery by driving the park road and doing as many pulloffs and short trails as we could to see some major attractions.

The view across from the visitor center gives a taste of more of what is to come. A vast, multi-tiered, white-rimmed canyon with a backdrop of the La Sal Mountains is the primary feature of the park. The remoteness and lack of water in the surrounding desert is also apparent in that not even the visitor center has flush toilets because all of the water has to be hauled in (though there is one water fill station – not accessible to RVs –  that we took advantage of to fill up some jugs as we were going on 10 days since our last water fill). 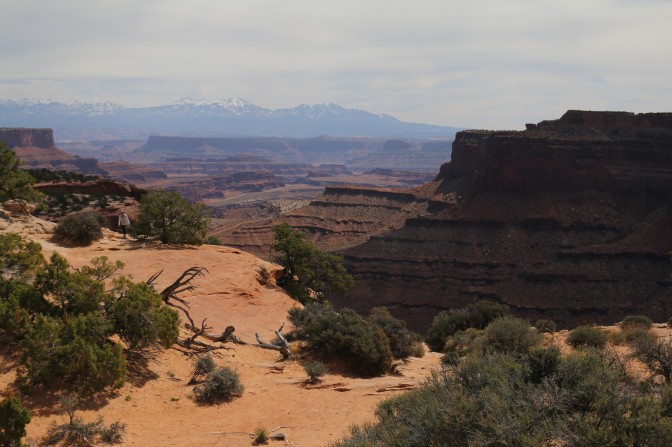 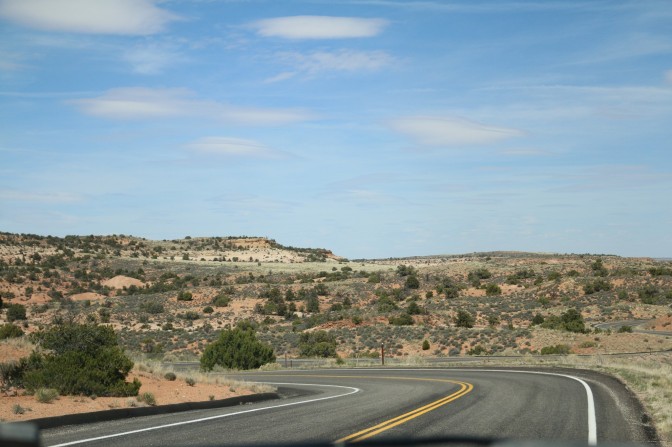 Our first stop was at the famous Mesa Arch. A popular image for screensavers and promotional travel images, Mesa Arch lies cliffside and frames out views of the canyon and La Sal Mountains. At sunrise, the underside of the arch is known to turn a bright orange. We didn’t go at sunrise, but judging by how many people were there late morning, I’m not sure we could have gotten a decent picture anyway.

The arch was actually a lot smaller than I was expecting but was still a beauty. The signs I had laughed at at Arches telling you to not walk on top of the arch were actually relevant here as I am sure someone has tried it. It doesn’t seem like a good idea though as the fall would be at least one thousand feet, let alone that it could compromise the arch! 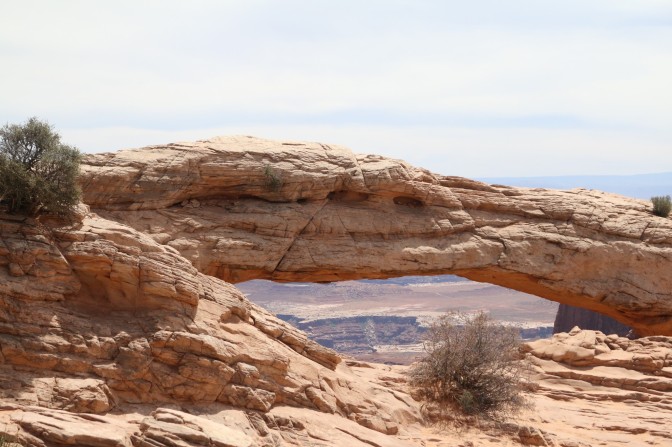 While passing Aztec Butte on the right, we took the spur road to Green River Overlook. A beautiful view of the river that indeed appeared green highlighted by the white rims of the canyon couldn’t have looked more like a painting if it tried.

With a name like that, we couldn’t miss this point of interest. A crater with jagged rock sticking up in the center of it, this geological feature has been an unsolved mystery for some time. It looks as though geologists are leaning towards a meteor being the cause, but it is stunning and unlike anything you’ve ever seen no matter what the cause. We only hiked 0.8 miles roundtrip to the first overlook because of my aforementioned foot abuse, but there was a 2-mile roundtrip hike to another overlook for even more perspectives. 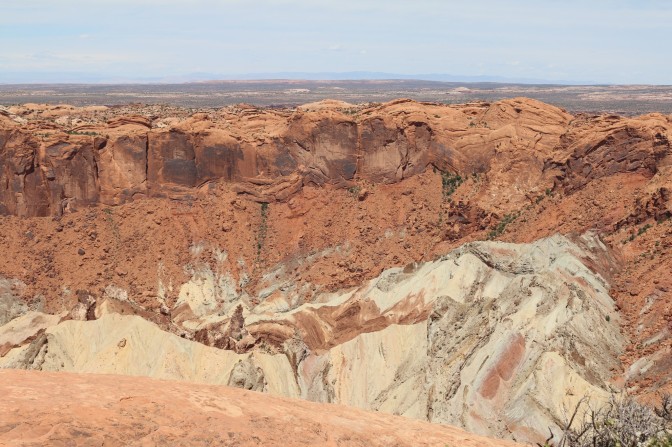 We also stopped here and while it wasn’t terribly different from other overlooks, it was sure a gorgeous site. And aren’t most overlooks worth the stop??

One that could almost be passed by as it is not on the map, this also delivered what it promised – some amber-orange cliffs presiding over the West side of the canyon.

White Rim Overlook was another sight that really stood out because of the, you guessed it, white rims of the canyon that really make it pop and look more dimensional. Apparently photos of this one got lost in the mix…

The apparent mother of all overlooks in the park, this one gave the vastest perspective of the park – and one that makes me wish we had invested in a wide angle lens. You could see both the La Sal and the Abajo Mountains, more jagged, white rimmed canyon, Monument Basin (the pinnacle-like structures formed by erosion within the canyon, and our favorite part – the Needles District twelve miles off into the distance. We pondered for a second why there weren’t any backcountry trails or 4WD roads leading from one district to another but we soon realized that there were a few pesky rivers in the way. 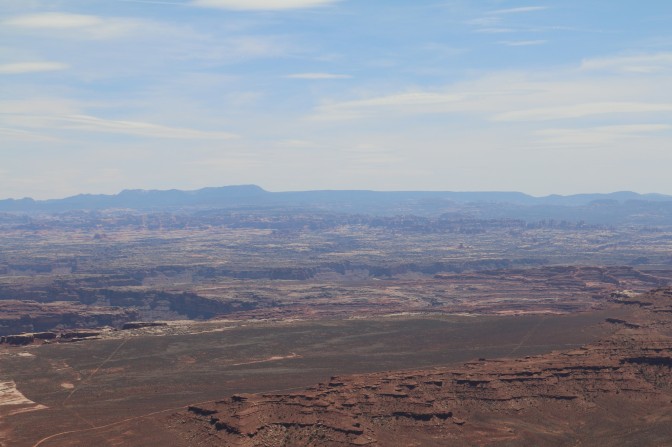 Overall, we were a little more impressed by the Needles District than Island in the Sky, but given that we didn’t really hike it, we can’t say that fairly. They are both certainly fantastic examples of nature’s grandeur and both feel worlds away from back home. We have heard great things about the Maze district, but its name is appropriate in that it is largely undeveloped and visitors must be very self-reliant in the wilderness. While I’m still bummed we couldn’t hike it more, Island in the Sky was more than worth the ten minute drive to the gate to take in this beautiful place, and gives us even more of a reason to come back to the area another time!