When we went to Zion and Bryce Canyon last year – as amazing as these parks are – we knew we were leaving a lot yet to be discovered in Utah. Yet, the distance to Utah’s other three national parks just wasn’t in the cards for us at the time.

We were determined to explore the rest of the state our second time across the country, and little did we know just HOW much else there was to see. Three national parks, several state parks, and countless other natural areas begging to be explored, we knew we’d be in Utah a while (and would have to conserve water and watch our gas gauge as there are pretty limited resources in some parts of Utah). Of course, we knew the most obligatory stop would be the infamous Arches National Park. Its hallmark Delicate Arch is featured on Utah license plates and is recognizable the world over, so it seemed like no exploration of the state of Utah would be complete without it!

Another Hunt for the Increasingly-Competitive Utah Campsite

We found ourselves leaving the Needles District of Canyonlands before dawn (yet again) to try and snag a spot at one of the few campgrounds available near the Moab area – where Arches, Dead Horse State Park, and Island in the Sky District of Canyonlands are all within forty minutes of one another. Since Arches is undergoing road construction this year – requiring all visitors, Sunday through Thursday, to be out of the park between 7pm and 7am (or else they will lock the gate and possibly ticket/tow you!) – Devil’s Garden campground is closed through November, which made competition that much worse, particularly during Easter/Spring Break/Jeep week/free National Parks weekend during already peak season (we’ve really come to accept the fact that if we chase even semi-good weather that it is almost always going to be peak season wherever we go). We took a brief look around Goose Island BLM Campground, but due to the limited number of spaces, this scenic little park along the Colorado River was not surprisingly filled to capacity. We headed straight from there to Horse Thief Campground, a larger BLM park closer to Canyonlands off of 311, since a park ranger had said that it was one of the most likely parks to accommodate RVs our size.

Around 7:30am, we snagged one of the last remaining sites at 56-site Horse Thief, which did turn out to be very RV accessible. It was a bit of a bummer after not having any fees at our last BLM campground to have to pay $15 a night for a park where the only services were pit toilets and trash collection, but what can you do? It was still a beautiful park and we were thankful to have found a site on this crazy busy weekend. We ideally wanted to avoid Arches – the most popular of the parks in the area – on the weekend, but with the road construction limiting the hours of visitation, we made our way in anyway so that we could view Delicate Arch at sunset when it lights up to that recognizable orange color. We were ultimately glad we did as there were certainly crowds but it really wasn’t as bad as we had expected.

We tried to hit as many of the park’s attractions as we could within two days, and we did pretty well. To be honest, the park was smaller than we thought it was going to be, though maybe our perception has just been skewed by the enormity of parks like Yellowstone and Glacier. It seemed we could have done practically everything in the park within a few days had we not been exhausted and called it early our first day, or had we not had to make sure we preserved a little energy for our finale of the Delicate Arch trail at dinner time the second day.

What we didn’t do

We lament not fitting in the Park Avenue scenic trail, the Sand Dune/Broken/Tapestry Arch loop (the Tapestry portion of which a ranger told us was rarely trafficked), and some of the other overlooks (though some we saw from the road). I was okay with skipping the primitive loop of the Devils Garden trail, as it was supposed to be very steep slickrock climbing and a lot of exposure. Who knows if it is bad as they say it is, but with trying not to make the trek into the park for more than two days, John didn’t seem to mind skipping it, either.

What we did see was a good number of arches. We are all for scenic vistas and interesting geologic formations, but when it comes down to it, you come to Arches to see arches. Okay, maybe there was one exception – Balanced Rock, which was a backbreaking 0.3 mile round trip hike. A pretty neat structure though that really did seem like a little more erosion and a good wind could tip over!

Next up was the Windows Section, which included another short trail to Double Arch, and a 1-mile loop to the North and South Windows arches, as well as Turret Arch. While it is important to stay on the trails so as to not disturb the fragile desert organisms (i.e. that crusty black stuff you see on the desert floor is actually alive and imperative to the survival of the rest of life in the desert AND will take years, if not decades to replenish if you step on it), the park says that it is okay to explore further on slickrock surfaces or on sandy washes. This allows further exploration of the arches from all different angles, which not only enhances the experience, but allows for some creative photo taking that cuts out the ever-present crowds.

My favorite of this group, and perhaps in the whole park, was the gigantic and beautiful Double Arch. The enormity and grace of this one just made it feel special to me. 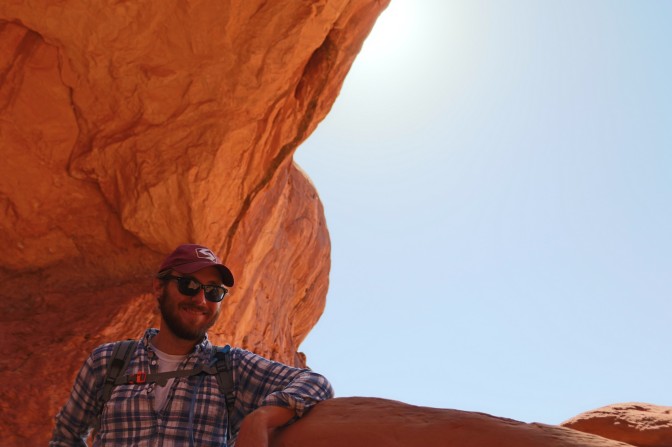 The rest of the Windows group was beautiful as well, and we followed the less traveled primitive part of the trail around the back of the Windows to get a different perspective. 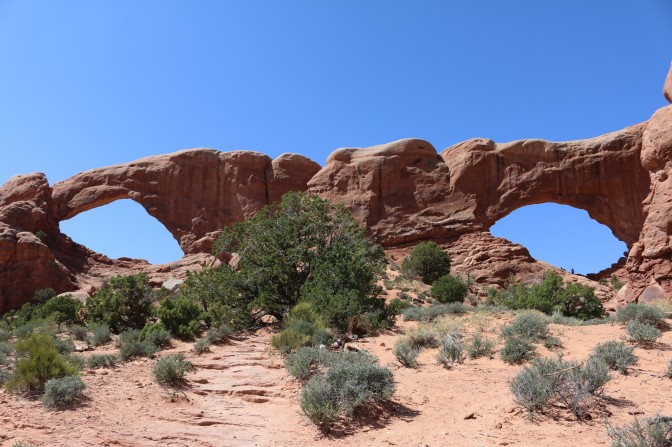 Our more off the beaten path arch was Tower Arch, which requires a 30 minute drive down an unpaved, very manageable road to the 3.4 mile round trip out and back hike to see it. We had been told that this was another spot we could escape the crowds as a small percentage of visitors make the trek out to see it. We didn’t find too many other people, and had a few precious seconds with the arch to ourselves, but did find several other groups close behind us. Alas, it was a gorgeous arch, a scenic and more rugged hike than the others, and we still knew that we had gained a little street cred for going to see this one. 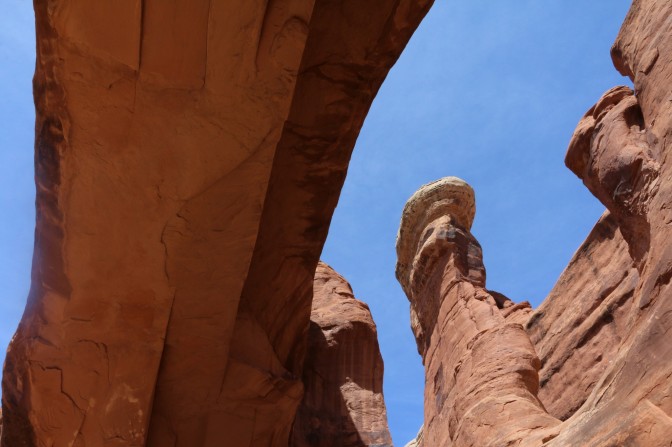 We did the very popular Devils Garden Main Trail out and back to see the elegant, if hard to capture in afternoon sun, Landscape Arch, as well as Partition Arch, Tunnel Arch, and Pine Tree Arches along their own spur. The cool sandstone “fins” lining our way were the icing on the cake for this trail.

Finally, we wrapped up with the Delicate Arch Trail, for which we got one of the last parking spots for around 5:45pm. A pretty bad blister had formed on my foot by this time, but since I don’t usually get them and didn’t know how nasty they could get, I trudged on knowing this was my last shot to see the arch at the best time of day unless we stuck around for another week. Estimates vary on how long it takes the average person to get to the iconic arch but we reached it around 6:30pm.

The hike itself was not too difficult but perhaps a good workout for some who may want to see this icon but are not usually hikers. The big slickrock slope portion of the trail was a visual pleasure, pretty fun to climb and not nearly as steep or exposed as it looks from a distance. 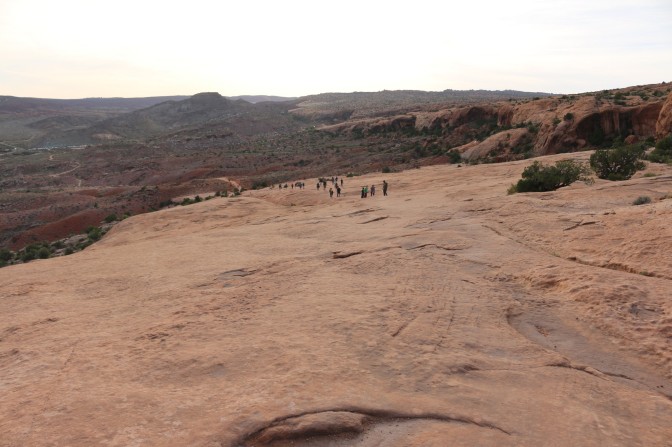 The 200 yard long ledge that the description touts is not as scary as it is made out to be, either. A misstep would certainly be bad, but it is not too high up as to be very scary at all.

When we turned the corner, there it was, standing tall above the bright orange basin upon which is presides over. A surreal sight after having seen it depicted so many times elsewhere, it was easy to see why it was an icon. Crowds of people surrounded the bowl as some took turns having their photo taken under the arch – which I totally get, but does make it very difficult to get many good, non-photoshopped shots of the arch when there are so many people. The upside to so many people hanging around though was that we were able to kill time until it reached closer to sunset by striking up a conversation with a nice family from Jersey who was very enthusiastic about our trip. They inspired us in that they said they didn’t let having kids keep them from traveling (and their kids are hence accustomed to traveling and have had a lot of great experiences) and we enjoyed sharing stories of our national park adventures. (If you happen to be reading, let us know when you visit Glacier or Big Bend! ;))

Around 7pm, when the ranger said we would start seeing the sun hit Delicate Arch and bring out all of its golden orange glory, it was like the sun flipped a switch. It went from the former to the latter in an instant! 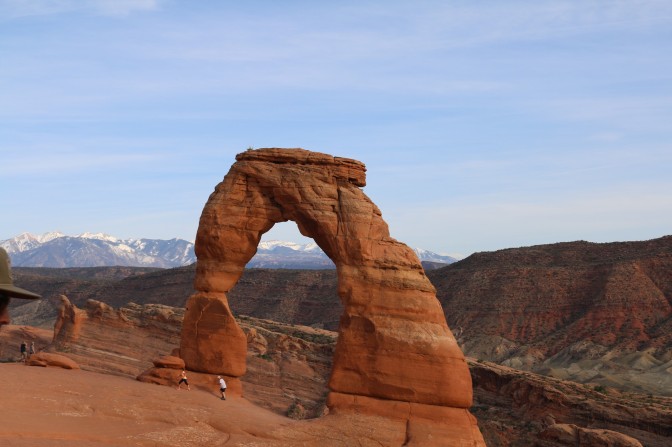 Taking in the sights a bit more, we headed back to a much emptier trail as many stuck around for sunset. The surrounding area and drive back were even more gorgeous this time of night. Though I found myself limited to flip flops and unable to do much walking the next few days due to that pesky blister, Delicate Arch luckily lived up to the hype enough to be worth the effort!

5 thoughts on “Our Visit to Arches National Park”