Monument Valley vs. Valley of the Gods

As we approached our journey into Southeast Utah, I kept finding information about Monument Valley and Valley of the Gods. Heck, Valley of the Gods was on our atlas! (Though since our visit, we seem to have seen a kajillion images of Monument Valley used all over the place!) Both offer stunning views of unique sandstone formations jutting out of the ground that almost seem to have god-like stature and each with character all their own. Both seem like they are worth the visit, but since Monument Valley charges admission/has some other restrictions I am not well versed in because it is on Navajo Land, we decided we would try for Valley of the Gods. We had read great things about it and the fact that you could camp on this scenic byway in near solitude for free amidst incredible scenery, we felt it was worth the detour before hitting the expected crazy crowds at the rest of Utah’s parks.

While we were tempted, we didn’t stop at the actual monument because it was $5/person and we hadn’t heard great things about the upkeep of it. Not to mention, we were eager to get to our site as a relaxing stop and taking time to use the pools and showers at the Cortez rec center had gotten us a late start to the day. Nonetheless, it was awesome to pass through all four states – Colorado, New Mexico, Arizona, and Utah – in one drive! (Who cares if New Mexico was only for a few seconds?!) We also got to see the same scenery as if we had stopped at the actual intersection, and it was lovely. 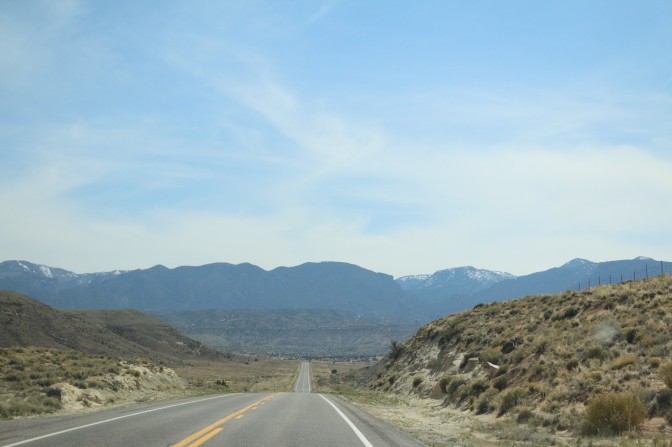 Finding Valley of the Gods

The turn for Valley of the Gods Road was 14 miles after hitting the turn on 163. We had put an RV park in Mexican Hat into our GPS to get us most of the way there and as we neared, Google recognized Valley of the Gods Road. We had read to come from this direction if you have a bigger rig as opposed to entering the other end of this sometimes treacherous 17-mile dirt road off of 261, and to not go more than four or five miles in due to some tight turns and deep washes that wouldn’t be too back bumper friendly. After driving the road unhitched, we can say this is accurate. The first few miles in from 261 are pretty flat, but to get to some of the better sites, there’d be some obstacles you’d want to avoid if you are long or have low clearance.

John turned on the mileage ticker once we entered the road to make sure we didn’t get too far in. There is a large turnaround around five miles in so we felt pretty secure shopping around for sites knowing this. The first and worst of the obstacles we faced in the first few miles was the wash immediately following the information board. A dip probably seven inches deep, we took it very slow and were fine. Of course, as with most washes, this would have been totally impassible after a recent rain.

As with many BLM areas, there have already been sites carved out and it is best to stick to these as to not disturb the fragile desert vegetation. Most sites are rather large, though some are easier than others to position into depending on your rig. There even appear to be some groups sites for anyone traveling with friends. No site we passed was bad, but as we went farther in, they just kept getting better and better. A surprising number of sites were filled in this remote area for a Monday night, but there were enough for us to be a little discerning with our choice. We had site envy of some who perched their big rigs on top of a hill or overlooking a cliff with views for miles. We finally decided on a site about three miles in that wasn’t perched up on a hill, but had unbelievable views from every window. 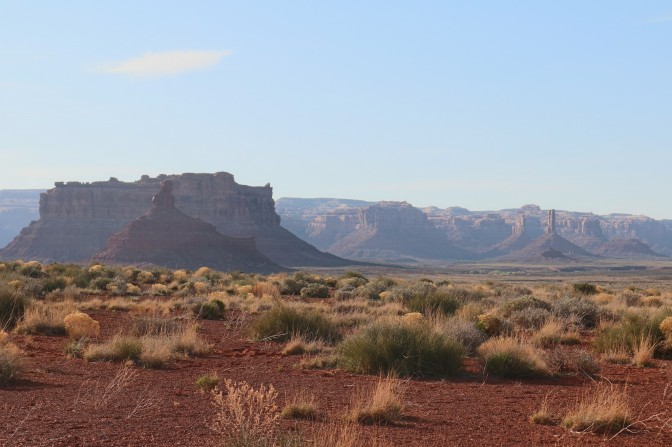 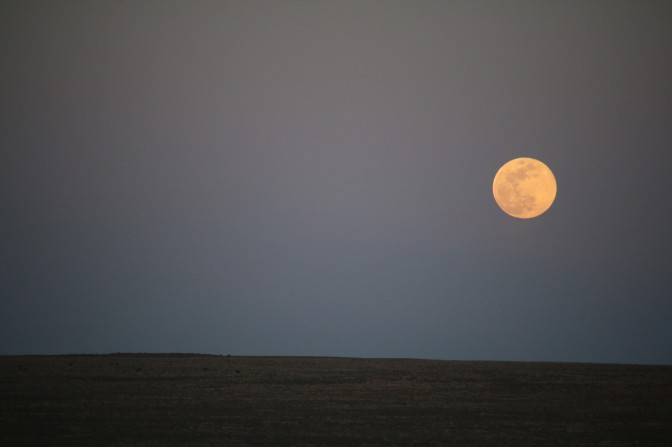 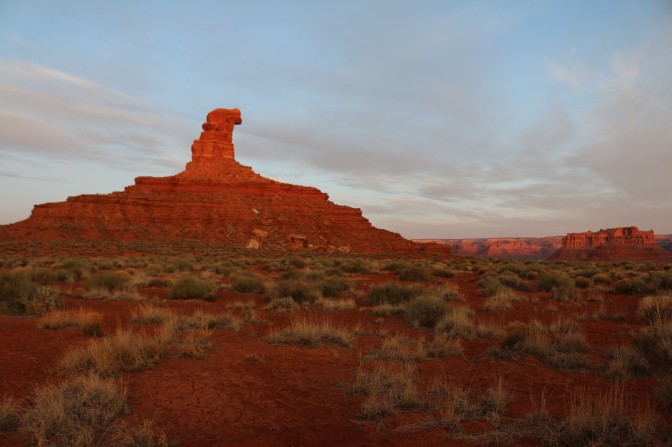 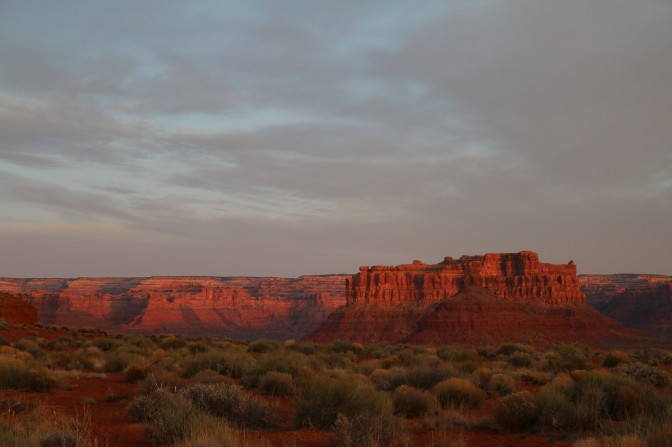 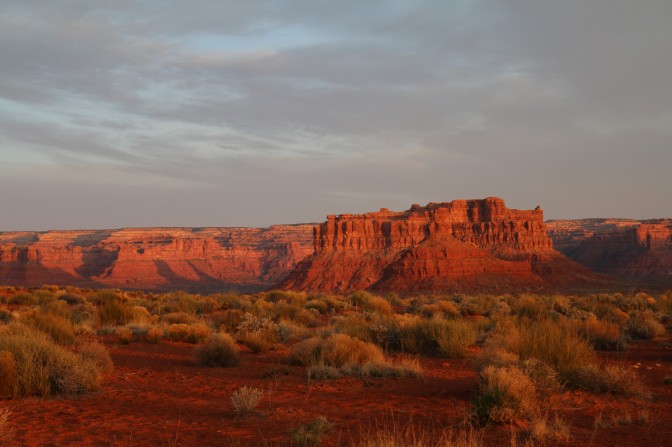 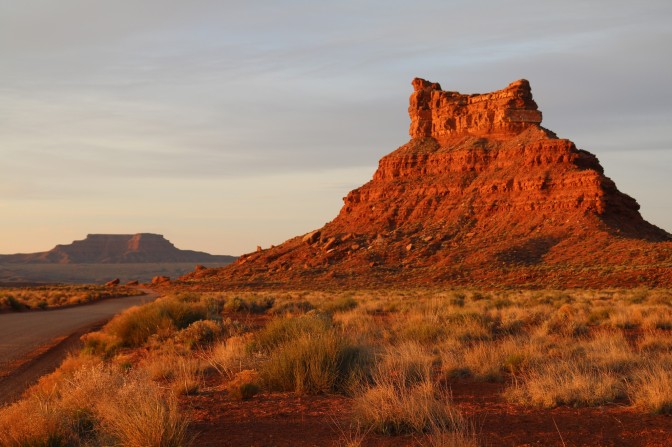 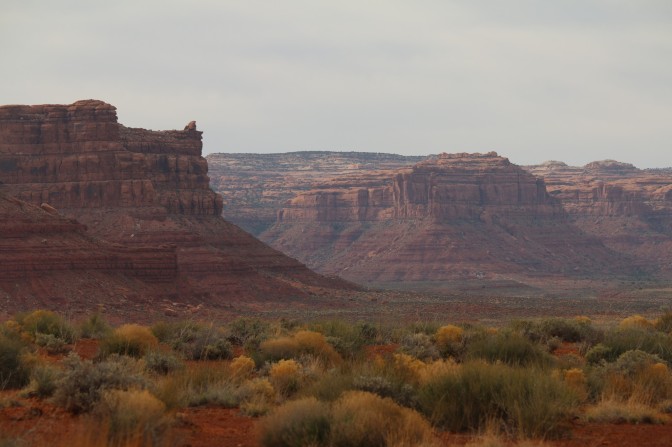 Throughout our stay, I found myself repeatedly looking out the window in awe that we were really calling this place home for a couple of nights – a half mile from anyone in the open, serene Utah desert.

There are no established hiking trails in Valley of the Gods, but it seems that most people wander around a bit. We only wandered up to some of the formations nearest us, careful to disturb as little of the vegetation as possible. I spotted a jackrabbit in our exploring, the first animal we’d seen in the desert this time around! 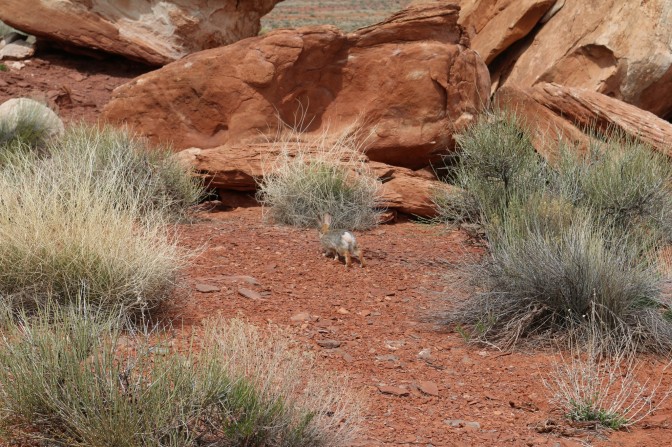 There were intermittent passing vehicles doing the scenic drive throughout the day but most of the time, especially later in the afternoon and evening, I would just sit outside and absorb the sheer silence and serenity of this almost magical place. Without any cell reception in this spot, this is truly a place to disconnect, recharge, and get away from it all. For anyone living within a few hours of it, I feel like this would be the ultimate getaway when you needed it.

Being camped right on a scenic drive, you can’t not complete the road! We took about two hours to drive the 17-mile road to the other end and back to our site, stopping to take in the views along the way. 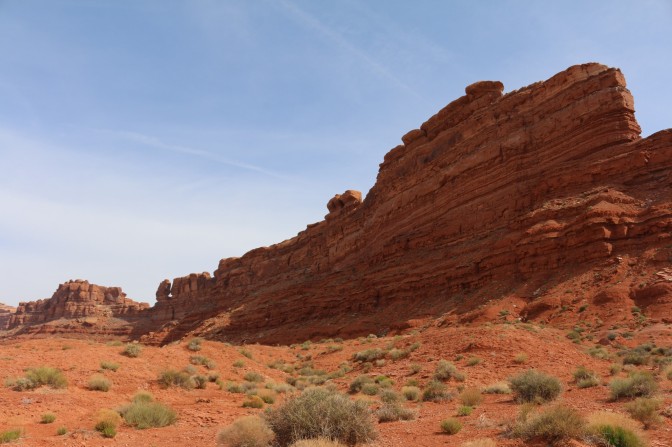 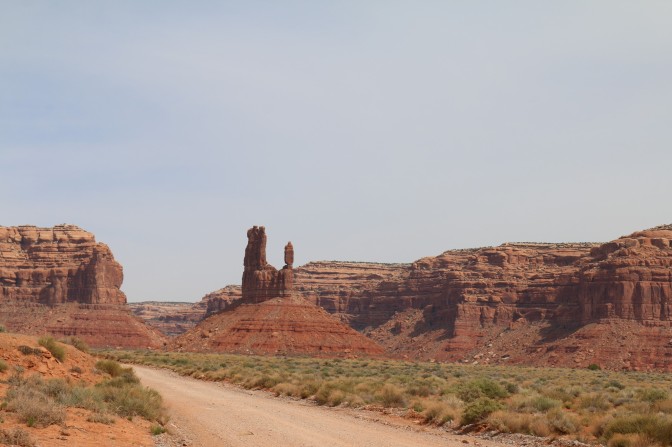 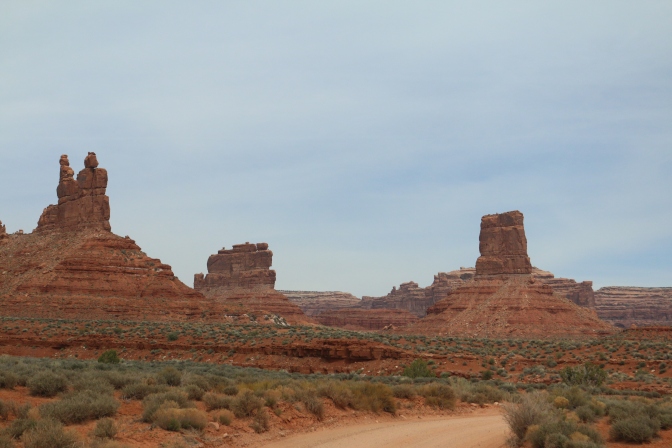 We were so glad that we went out of our way to camp at Valley of the Gods. Our most magnificent campsite yet and totally free – can you ask for anything more?

One thought on “BLM Camping at Valley of the Gods: A Gem in the Utah Desert”