Coming from the Amarillo, Texas area after having been to Palo Duro Canyon State Park – which we recommend stopping at if you are nearby – we drove West to Albuquerque to make a desperately needed Costco trip. After feeling especially energetic, we left there around 6pm for some beautiful New Mexico driving at sunset.

Our destination: a Farmington, New Mexico Walmart to be well positioned for a day trip to visit the ancient Puebloan cliff dwellings at Mesa Verde National Park.

I had called ahead to see which of the ancient structures would be open this time of year as it seemed that the park tends to really come alive in April and May. I came to find out that the only dwelling that would be open for ranger-guided OR self-guided tours (typically Spruce Tree House is open year round) would be Balcony House, and the first day of tours would be the day we were arriving – April 9th. Talk about good timing! Apparently geological hazards had forced some temporary structure closures while others simply weren’t open yet for the season, and understandably as temperatures were still only in the forties when we arrived (making for some cold low temps in the camper, but with intermittent heat running and running the water every so often, we and our pipes survived!). It seems to me though that they opened Balcony House a little bit earlier than usual so that they would have something open.

You want me to climb what?!

Perusing the NPS website the night before, I had the misfortune of seeing the description of Balcony House. It warns people that those uncomfortable with heights may not be able to complete this tour as it requires climbing a 34-foot ladder, then two more 15-foot ladders, with some exposure on these. I am lucky to have a brain that tends to psych myself out about things like this. I of course then looked up visitor reviews online, which ranged from joking about how hard it was, to saying it wasn’t that bad, to “I couldn’t do it”. I put my mind at ease thinking that it can’t be that bad if so many people can do it. I’ll just look ahead and it’ll all be fine!

The next day, we drove the hour and a half up to Mesa Verde, passing some amazing scenery along the way. Passing into Colorado was just as I’d imagined it would be. It was kind of funny that as soon as we passed from New Mexico to Colorado, the incredible rock formations stopped and greener pastures and mountains came into view. Just what I’d imagined Colorado to be. We were excited to add a new state to our list for the trip, too, even if we were only going to be there a day. 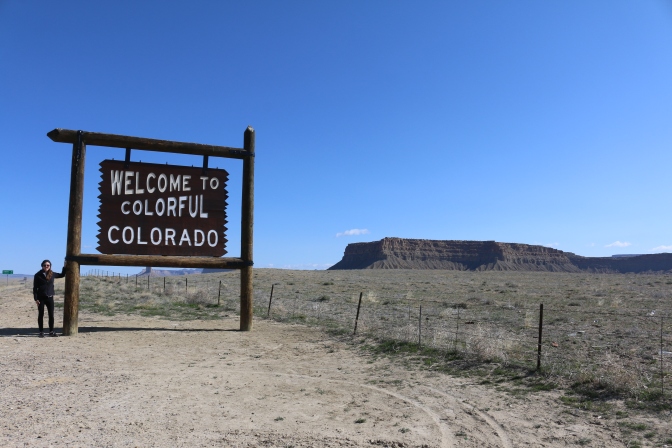 Upon our arrival at Mesa Verde’s beautiful visitor center, we went to the ticket desk right away to secure our time spot for a tour. Tours are an hour long and a hardly wallet-busting $5 per person. The only tour time open for purchase by this point though was for 4pm – so I had all day to build up to it, yay!

We dropped our trailer off at the RV parking lot, as the park road does not allow anything to be towed on it, though we saw some twenty-plus foot Class B’s and C’s along the way. It was odd to us that the RV parking lot didn’t actually have RV parking spots – just regular sized spots – but it was empty except for one park ranger truck so we just fit in where we thought we’d be out of the way. It was a shame that there was no overnight camping in this lot because the view was spectacular!

The park road, petroglyphs and first views of cliff dwellings

It took us about an hour to drive to the area that contained the cliff dwellings and it was a gorgeous drive. 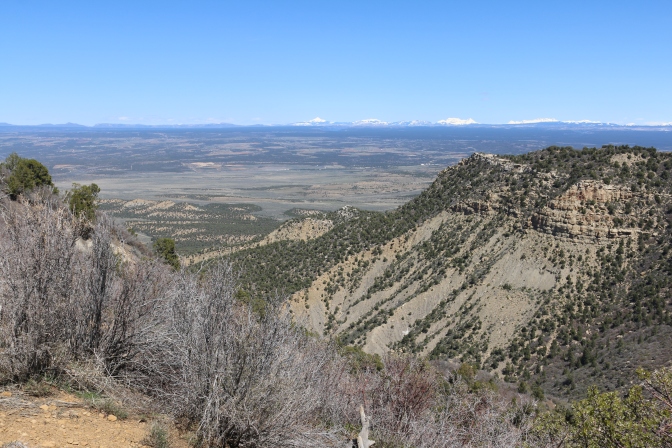 On the ranger’s recommendation, we completed the 2.4 mile Petroglyph Loop, but not before catching our first glimpse of Spruce Tree House from a distance.

There are paper booklets available at the trailhead for a 50 cent donation that allow for a self-guided tour of this loop. The book primarily focuses on how the Puebloans would utilize different vegetation along the way, which was definitely interesting but got a tad bit repetitive as we were on a time schedule, particularly as we couldn’t go terribly fast over the rocky terrain. The guide was most helpful though once we reached the point of the petroglyph wall, which told the story over the years of the tribe that inhabited this area. 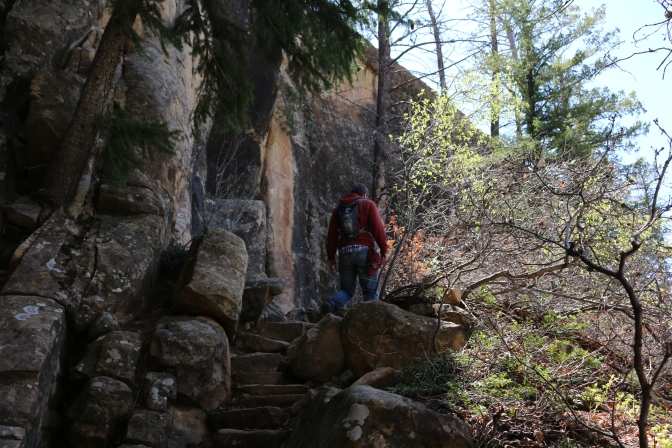 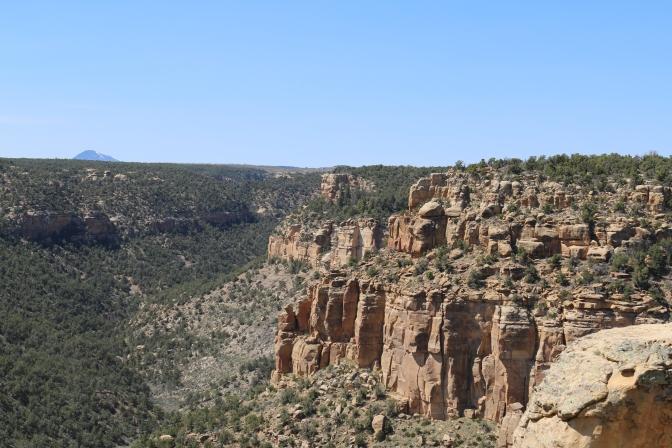 We unfortunately didn’t leave enough time to visit the museum by Spruce Tree House and had to head right over to Balcony House parking area, as it would take 15 to 20 minutes. We gathered around with the park ranger, a trained archaeologist, who was very personable and enthusiastic about her job as she had twenty-five years’ experience studying Native American cultures in the area. What a treat that the park rangers are so knowledgeable about their stuff.

Come 4pm, the park ranger went into her safety speech, which she even admitted was purposely to scare anyone who might not be sure about the hike as people getting stuck can hold up the tours. She said that it is totally acceptable to turn around before doing the large ladder, but that once that one is climbed, there is no turning back – gulp.
The tour started out with a history of the people that once inhabited this fascinating place. The ancient Puebloans – whom many other area tribes can trace their ancestry to – arrived in the area around 500 A.D. and left sometime around the 1200s, the reason for which we still don’t really know. The Puebloans spent most of their time here living off of the land and taking advantage of the rainwater flow down the mesa by farming corn, beans and squash, and later harvesting turkeys. It wasn’t until the 1100s that they moved down under the cliffs and built these magnificent structures that area tribes feel are still inhabited by their ancestors.

The ranger stopped to show us how rainwater would seep through the rock and collect, providing water sources for the cliff dwellings. It was on from here to the big moment.
The ladder stood high above us as we approached and I stared at it a little too long to assess whether it looked scary or not, just as I had had a little too much time to think about. I could still turn back, here, I though, worst comes to worst. 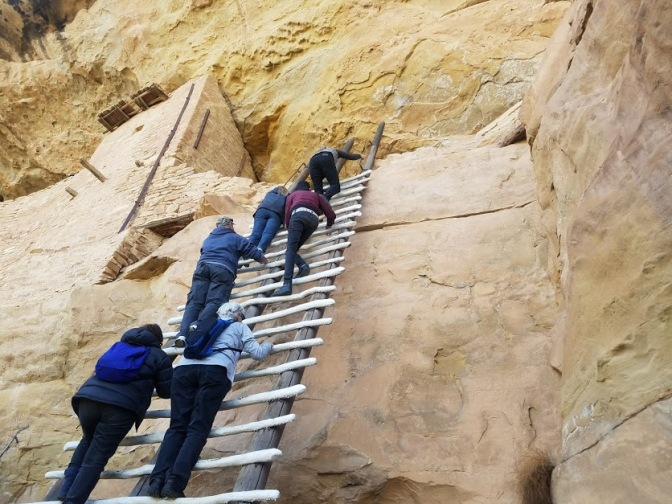 After waiting to be the very last person to go up and for John to be able to go up next to me on this two person wide ladder, I went for it to see how I felt at the start. Allowing a good amount of space between me and the person in front of me, I found myself just powering up it quickly and before I knew it, I was almost to the top! My legs admittedly got a bit shaky near the top, but there was no turning back – I was there! I had a few cheerleaders and empathizers who also did not like heights that congratulated me on finishing. I felt so relieved and it really wasn’t THAT bad!

It was awesome to be inside Balcony House and take in the views the Puebloans had, even if the sheer ledges would have been a little scary to live next to! Of the 600 achaeological sites discovered within Mesa Verde, Balcony House is certainly one of the largest and in tact and we were asked to be careful to avoid touching as much as possible as oils from our hands would turn the stone black and potentially damage the site. 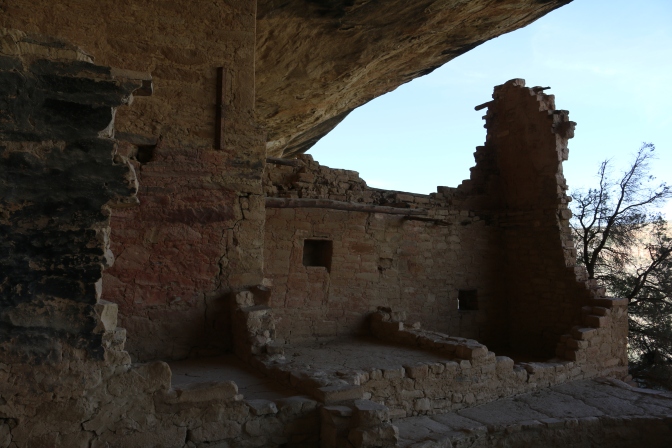 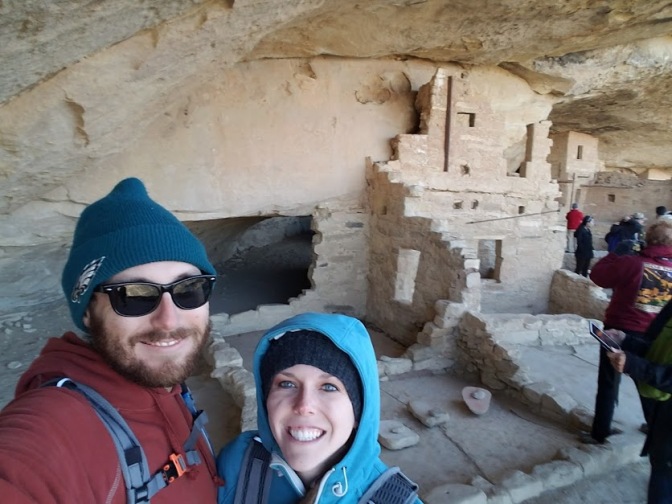 This particular dwelling contained kivas – below ground round rooms with firepits, a very clever ventilation system, and used for religious and gathering purposes. These rooms were supposed to remind the Puebloans of their origin according to their tribes’ legend – that all of the good people rose above from a “3rd world” underground to inhabit the earth.

Facing East, this dwelling never gets any sun so it was quite chilly there, making it hard to imagine the harsh winters they must have endured there. It is assumed that this particular dwelling was used by priests who would pray for rain as there were a good number of prayer sticks and other artifacts found within the dwelling (which, being considered sacred items, are now in the possession of the tribes). She went on to say that many other artifacts are unfortunately not present because early excavations saw a lot of looting.

After running 30 minutes over the scheduled tour time (we really got our money’s worth!), the ranger dismissed us as we climbed over some slickrock to the rest of the fun. There was a three foot long narrow tunnel to crawl through – which was only constricting for the first foot or two, after which you can stand up and crouch through the rest. I’m not bragging, but I fit through it pretty easily, though I think most people did, too. The tunnel is famous for creating some not-so-flattering shots of some behinds though…

Then to the last two ladders, the first of which requires climbing some sandstone steps immediately after. They really weren’t bad at all, as the ledges were well chained off and there were also chains to hold onto to go up the steps. The only part that had me feeling a little dizzy was waiting in line on a chained off ledge for the last ladder. Maybe it was just a little adrenaline rush though…

Upon completion, I felt a sigh of relief and pride that I didn’t let the ranger scare me off. I was so glad that I was able to get over my hesitation and see inside one of the ancient dwellings I remember learning about as far back as elementary school. I was also kind of glad that Balcony House was the only one open as I probably would have been intimidated otherwise.

On our way out, we peeked at a few other cliff dwellings, including the majestic, 150 room Cliff Palace, before picking up our trailer and heading to the nearby, also quite scenic Walmart (gotta love a scenic Walmart!). Oh, and I’d be remiss not to mention that for $5.50/person we were able to shower and use the lovely facilities at Cortez’s rec center the next day if you’re in the area and want to get some bang for your buck!

4 thoughts on “Getting Over a Fear of Heights: Balcony House, Mesa Verde National Park”