The near 100 degree heat even in mid-October made us very reluctant to do any real hiking our first day in Death Valley National Park. So we asked a park ranger for recommendations on any good drives through the park, noticing on the map that there were a good number of roads that required a four-wheel drive vehicle. The ranger we spoke to recommended we drive up to Titus Canyon to spend the afternoon.

We approached twenty-seven mile long Titus Canyon Road from Beatty Cutoff to follow it going East to West as it is one way going through the canyon. This took us into Nevada and past this awesome welcome sign.

The quality of the road from the beginning was a bit rough, and made us question the sign at the beginning that said that four-wheel drive and high clearance were “recommended”, and not required. The initial surroundings were also pretty, but admittedly a bit uninspiring, or at least not very unlike the roads we took to get to Death Valley (or maybe we’re just getting spoiled with our scenery).

After driving on this for a few bumpy miles, we started to enter the canyon area, where the views certainly started to get more interesting. 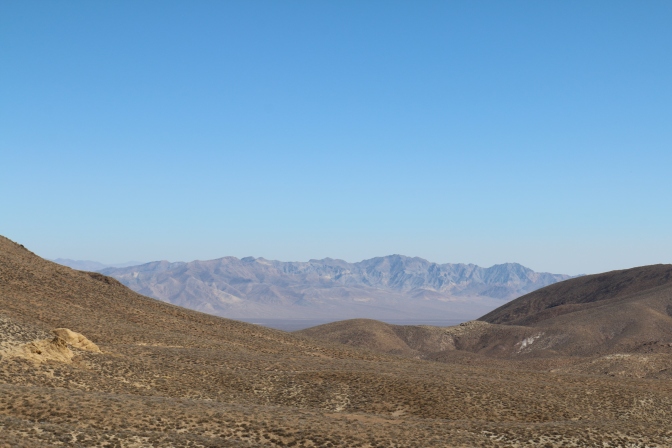 There were other cars on this road but it was not overly crowded and it was easy to find wide parts of the road or pull offs that would allow other cars to pass while we stopped off for photos.

We eventually came upon Red Pass, the highest point in the road. It is actually where, if you want to get technical, the Titanothere Canyon (the first part of the drive) and Titus Canyon meet. I’ll admit this section made me a tad bit nervous with all of the huge divets in the road along the tight corners as we climbed. The pass was beautiful though and gave us more of a bird’s eye perspective of the canyon and beyond.

We then came upon the ghost town of Leadfield. One of several ghost towns in the area, this one was built in 1927 and had a short life of only two years as the mining prospects that drew people to the area wound up being a big disappointment. A few structures still remain though. Several metal structures are surprisingly still in tact, as well as what we guessed to be a well and an old mine, which is gated off at its end. Additional shreds of metal still litter the area, too, and proof of other structures are still barely visible. There are short hiking trails that take visitors through this area. 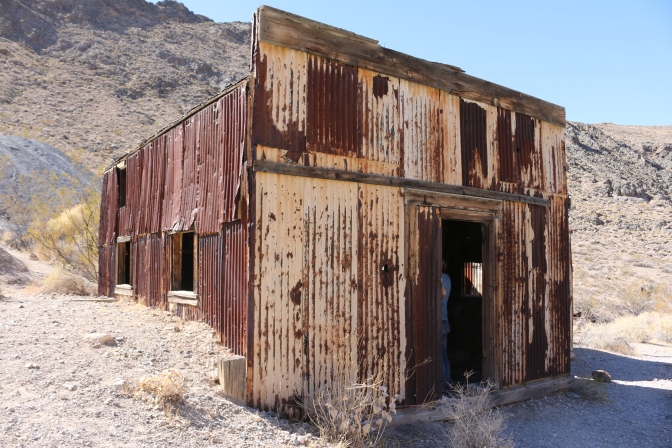 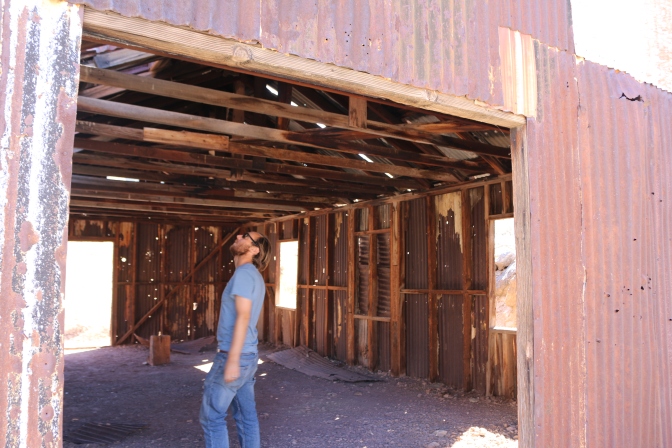 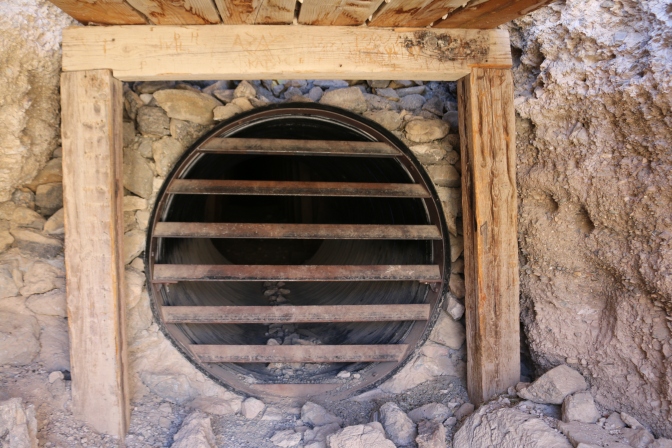 After this was our favorite part of the drive – driving 1.5 miles through the slot canyon. As we drove across the canyon floor, only as wide as the width of the road, our eyes got wide as we took in the magnanimity of the rock formations around us. Fascinating and colorful rock formations surrounded us and we stopped for frequent photos. 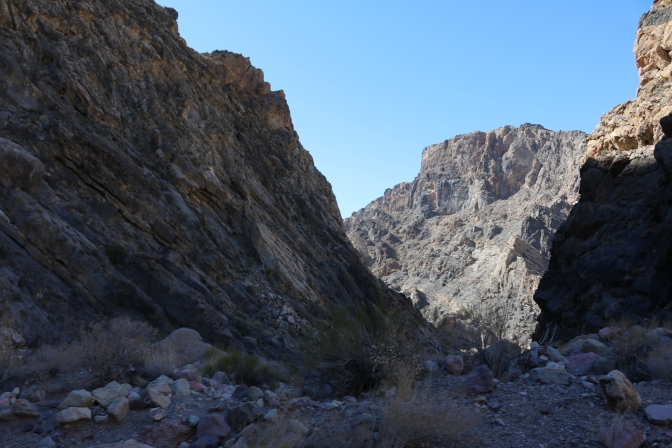 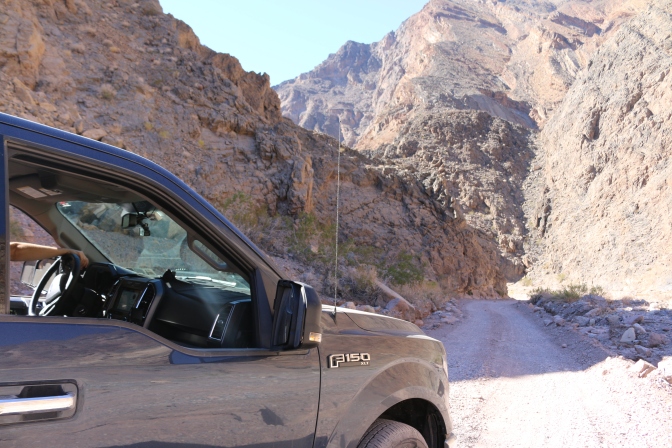 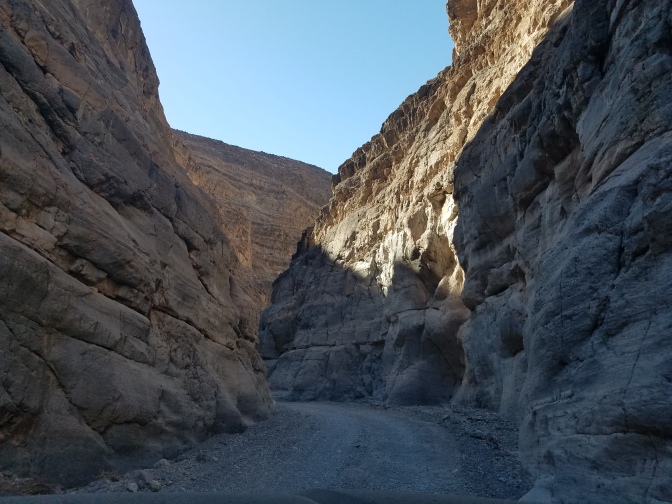 Upon exiting the canyon, the remainder of the road was more of that beautiful, wide open desert road. Overall, the drive on Titus Canyon Road took us about two to three hours, taking the rocky route slow for both safety and comfort, as well as to stop and take in our surroundings. 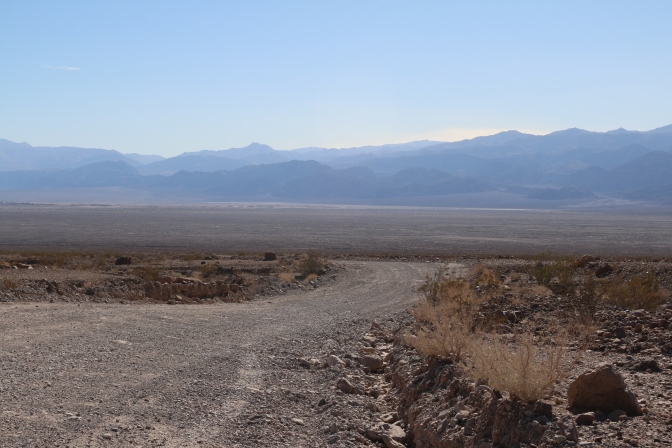 There were several trailheads near the end of the canyon, but since they were on the strenuous side, we were bummed we didn’t think we could handle them in the heat. This drive also would not be advisable after a rare rain, as the canyon is prone to flooding, and we would definitely recommend bringing a reliable four-wheel drive vehicle and plenty of water. Otherwise, the combination of views, excitement and still being able to enjoy it despite the heat made this drive one of our favorite parts of Death Valley!

One thought on “Death Valley: Four-Wheel Driving Through Titus Canyon”