Ever since John was a kid and heard stories about his parents’ visit to the island, Alcatraz has been on his bucket list. Everyone warned us that we would have to reserve tickets weeks in advance if we decided to go, but since our travel itinerary has mostly been left to fate, we tested our luck and scored tickets the day before we got to the Bay area!

Alcatraz Island is a small and beautiful island in San Francisco Bay with amazing views of San Francisco, the Golden Gate Bridge and the area’s beautiful coast. With its location and beautiful views, one would think it could be a desirable vacation destination. Its rich history rather includes serving as sites for lighthouses, military forts, a brief Native American occupation, and most famously, a high security federal prison for the country’s worst behaved prisoners from 1933 to 1963. Now preserved as a national landmark and managed as part of the Golden Gate National Recreation Area, it is one of the most popular tourist destinations in the United States.

Our $35.50/person tickets through the official cruise provider, Alcatraz Cruises, included a round-trip ferry ride to the island, free reign of the island until the last boat of the day, as well as a self-guided audio tour of the prison facilities. Wanting to sightsee the earlier part of the day, we had reserved the last departing ferry of the day from Pier 33. Walking from Ghirardelli Square, we assumed Pier 33 would be closer so our Alcatraz experience started out like a scene of the family from Home Alone running through the airport. We made it in time though and boarded the boat for a chilly and hazy fifteen minute ride. 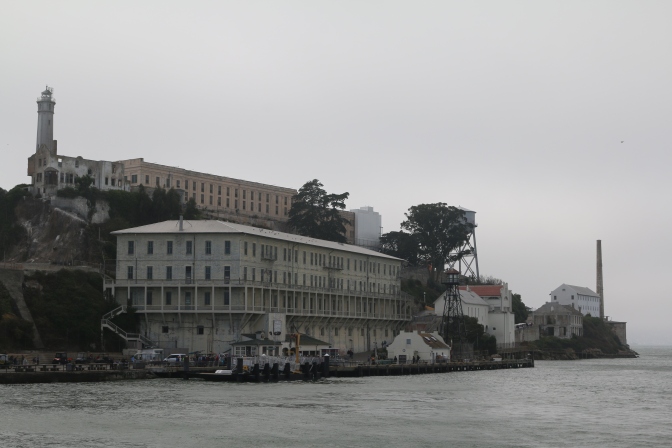 Upon our arrival, we were prompted by a park ranger on rules of the park and then let on our own to explore. Having a little less than two hours before we needed to line up for the last departing ferry, we were initially a bit concerned that perhaps we had cut it a little close time-wise. This time wound up being just perfect, however, so don’t fret if you find yourself in the same situation.

We made the walk up the steep hill to the main cellhouse where we waited in line to receive our headphones and do the forty-five minute self-guided audio tour (which we learned  comes in an impressive number of languages). While waiting in line, we passed the old shower area, which certainly seemed fit as a punishment for the country’s most hardened criminals. 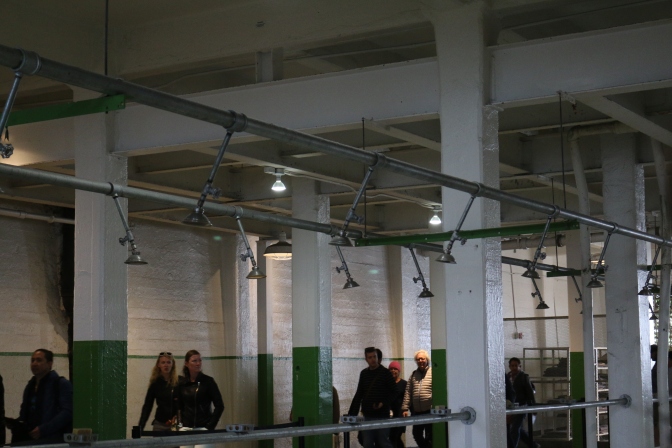 The tour then wove us through different areas of the main cellhouse and officers’ quarters. We were regaled with stories of what life was life for its prisoners, like mobster Al Capone and George “Machine Gun” Kelly in this highly structured, austere environment despite its scenic location. 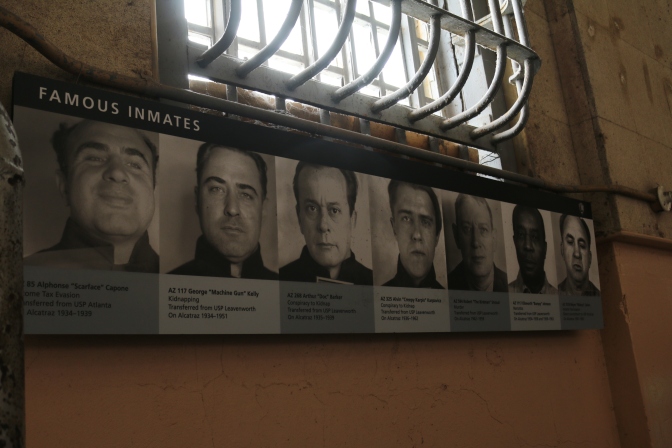 Some of the cells were open, allowing us to go in. I got the chills, but John just thought it was cool.

We were taken through the library, which prisoners earned access to only as a privilege.

Some of the cells were decorated as they were for prisoners who also earned the privilege of painting or playing musical instruments in their cells. They kept themselves busy by playing board games by talking out their moves through the cell walls – somehow I get the inclination that not all of the rules were followed in these games. Also seen in this photo is a dummy (not sure if it’s original or a replica) akin to what prisoners used in one of the largest breakout attempts to fool officers into thinking they were still asleep while they tunneled out through holes like the one in the back of this cell. Imagine the surprise of one of the officers who poked one of them and the head fell off!

Divets in the floor from bullet shells served as further evidence of bloody breakout attempts.

Another set of prisoners were actually successful in tunneling their way out, never to be heard from again. Speculation from some says that they never made it and must have drowned in the cold water, others say that they escaped to South America, as they had been learning Spanish. Guess we’ll never know.

The officer’s work space and quarters were significantly nicer than the cell blocks, as expected and remain fairly intact, save for the residential building, which was damaged in a fire during occupation by several dozen Native American activists fighting for rights to the land in the late 1960s. 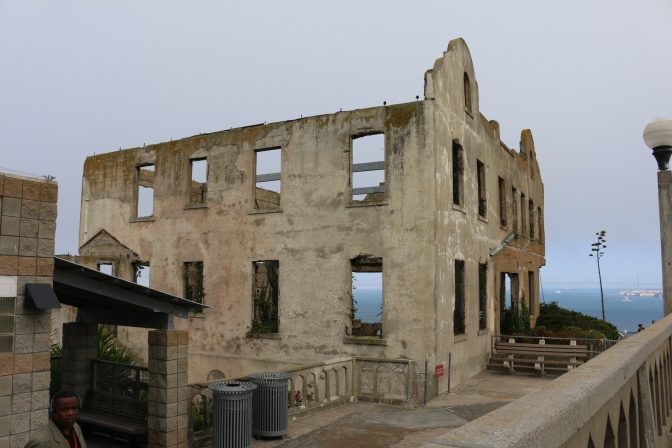 Employees were actually housed on the island along with their families, which just blows my mind. I would think I’d be scared silly as a kid to be living on an island with the most dangerous people in the country, but they apparently took it in stride and formed a close knit community. Families on the island were even said to be revered socialites in the Bay area as they could gain others access to this beautiful island with the lavish parties they would throw. 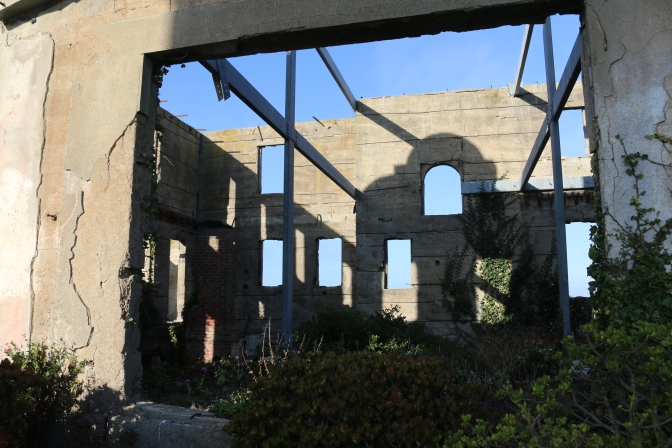 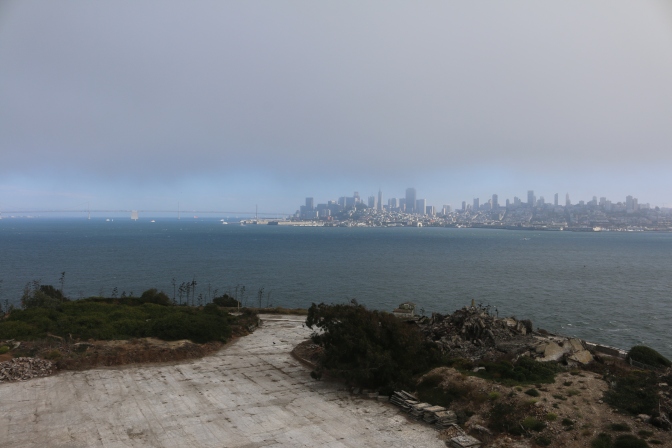 The audio tour concluded in the dining area, where we learned that quality food was a given right for the prisoners. Definitely not the stereotypical bread and water – they ate better than we do, it seems! The most fascinating part of the kitchen tour though was the gated kitchen where they did everything they could to maximize safety, including painting a black outline of all of the large knives that were supposed to be hanging on the wall. Should one be stolen, the chefs would be able to tell right away!

After the tour, we returned our headphones and walked around the cellhouse a bit more, checking out the view from the “windows”, more cells, and the visitation area. As the crowds cleared and the sun got lower in the sky, the halls got eerier and eerier.

We walked back down the hill, admiring the view once again before catching the final ferry back at 6:30pm for a beautiful sunset. 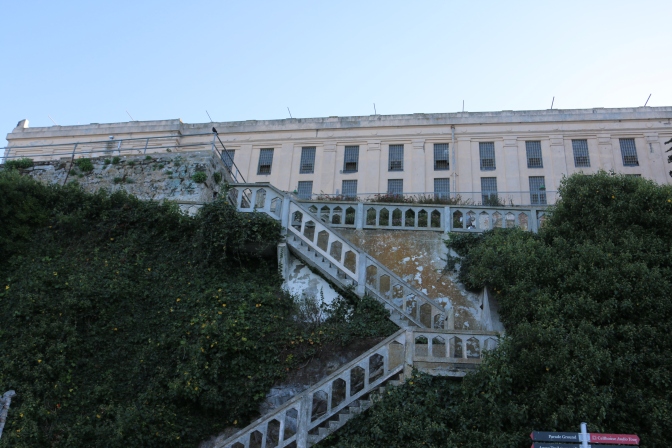 Honestly, a lot of uber-popular tourist destinations tend to be a bit overrated, but looking back a few months later, Alcatraz definitely left a lasting impression on us. An Uber driver had informed us that it had recently been restored, but it still seemed pretty authentic to us and it really did give a good feel for what it was like in its heyday. So if you’re in the area, it’s definitely worth the hype!