Smith Rock is a state park and natural wonder near the Oregon towns of Terrebonne and Redmond (bigger on the map). Despite its name, it is more than just one rock formation, but instead a conglomeration of tuff (compacted volcanic ash) and basalt rock cut through by the Crooked River in the High Desert of Oregon. The park is world renowned for rock climbing, but also has a good number of hiking trails, some of which even meet up with adjacent National Forest Service and Bureau of Land Management trails.

We paid the $5 day use fee at the self-pay station and stopped with the trailer in tow to do some short hikes as the only campground on site was tent-only, though looking back on it, perhaps we could have found some BLM land on which to park the camper. Bottom line though is that we had no problem parking our rig in one of the RV sites in their almost empty parking lot, at least in September. 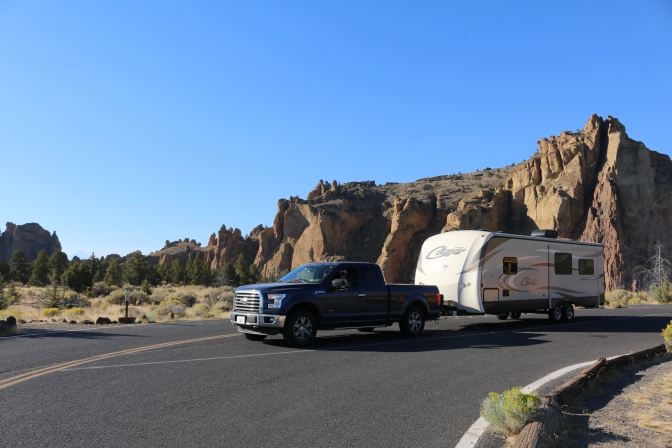 We took the Rim Rock Trail, a mere 0.5 mile paved, though steep, trail, and continued along the Crooked River to meet up with the Canyon Trail. The Canyon Trail is 1.5 miles of relatively flat, dirt trail that leads to the intersection at NE Wilcox Avenue, where you can make a left and follow the road back, or just turn around. Not armed with a trail map, we wound up stopping just short of the intersection as we had no idea when or where it would end and we wanted to get to our sleeping spot before it got too dark. We enjoyed the trail nonetheless, taking in the views of the Smith Rock Group, watching rock climbers, and saying “hello” to these little guys… 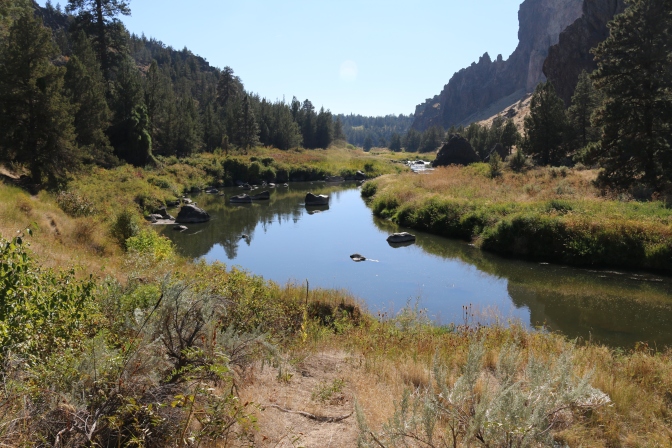 The trail was warm but comfortable in late afternoon as the rock formations created shade and the trail followed the river. A very peaceful and quiet trail, you could even hear the quiet chirp of crickets coming from the marsh.

Whether you are a skilled rock climber, looking to hike, or simply to take in the scenery from the parking area, Smith Rock is certainly worth a stop when travelling through Central Oregon!