Today, we had an easy packing up of the campsite since we were not hooked up to any utilities and did not have a dump station available to us. After doing a little more research, it seemed that a lot of people tend to drive with partially full tanks and while it’s not ideal, we decided that we should be okay.

As the driveway into Eagle Creek Campground could only fit one vehicle for two-way traffic, I walked out to the road to be sure no one came through, particularly another camper, as one of us would have the unpleasant task of backing up. This couldn’t have gone smoother and then it was on to taking our camper down the steep, twisting dirt/gravel Jardine Road. John put it in tow gear and just took it very slow, and we did just fine. One driver even yielded to us so that we could take one turn wide without worrying about hitting them.

We then set off on our drive through the North Gate of Yellowstone down through to the South Gate, through Grand Tetons National Park, known for its namesake snow-capped mountains and lakes. Compared to the Swiss Alps in appearance, I was very excited to be headed there. We were planning to stay at the Gros Ventre campground, which had been recommended to us as a beautiful place to stay and where wildlife are frequently seen.

The drive sounds much more intimidating than it actually was. While the Grand Loop road is certainly not the widest and without much of a shoulder in places, going from north to south was not bad at all. Not too many inclines or winding roads going this direction, and we just took it at a manageable pace in case we were to run into a buffalo traffic jam or any spectators on the side of the road. The fact that there are so many pull-offs in Yellowstone also made it an easy drive.

Once we got through the south gate, our easy drive continued. It sounds like it may be intimidating to drive through the Grand Tetons, but they are really just off in the distance to the side – though they never look too far off into the distance because they do not have any foothills, which makes for some of the most breathtaking views I have ever seen. This may be my favorite place we have visited yet. 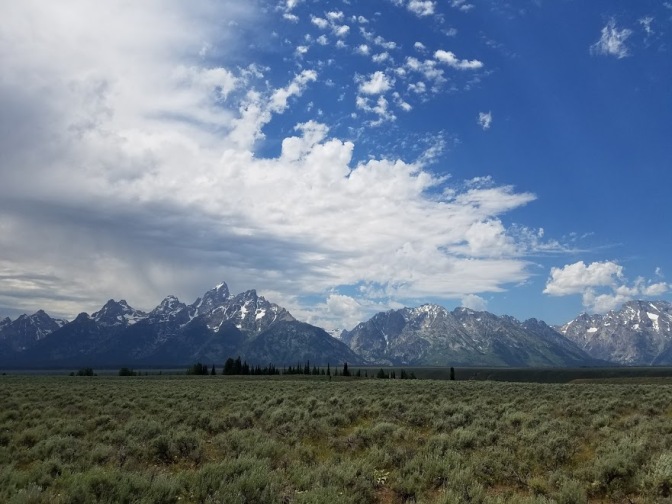 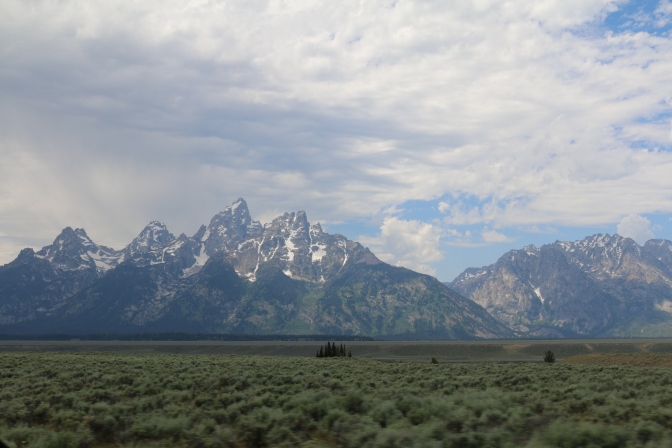 Once we arrived at Gros Ventre, we were greeted by very friendly and knowledgeable staff. We were given a site with direct mountain views and were even given an offer to claim a “favorite”, even more scenic site nearby if the neighbors left in the morning. Unfortunately, this campground has no utilities or public showers, but does have a freshwater fill, dump station, and flush toilets available. We would have liked to at least had electric and public showers after our previous site, but once we saw the view from our site, we were really willing to make do. (And we were given a list of places we could again pay to take a shower in the area.)

Being that it was my birthday, we decided to go out to dinner. Originally planning to go to the Mural Room in Jackson Lodge, which has amazing views of the Tetons, we were unfortunately unable to make reservations at a reasonable hour given that it was also 50 minutes from our campsite. So we ventured into the quaint and beautiful Western skiing town of Jackson Hole to a pub called The Bird, which also had a great view of the mountains from the deck.

After each trying the Epic Escape to Colorado, a sweet and light, hoppy ale, a delicious burger with avocado and green salsa, and a schnitzel sandwich, we managed to find room for dessert also. 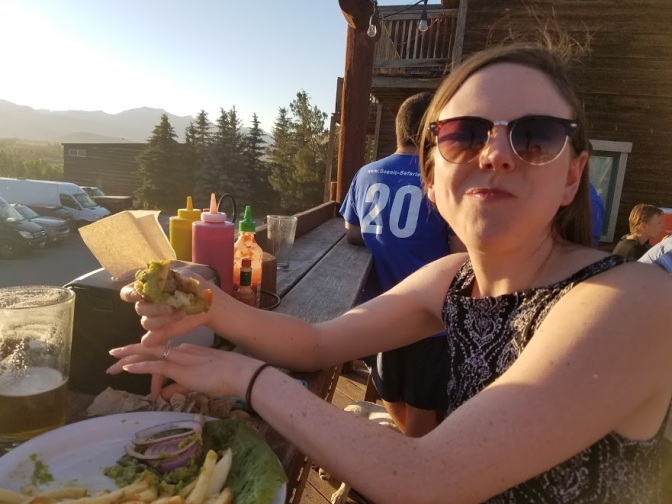 We went to a gourmet ice cream place nearby called Moo’s, and boy, did we need some extra room for dessert! Hidden under this mound of whipped cream and hot fudge was a generous scoop each of salted caramel and Belgian chocolate ice cream that we ate in the park across the street. 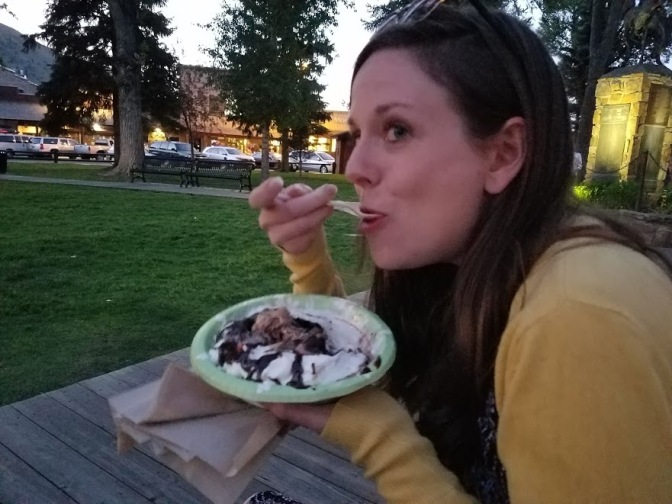 A birthday in the beyond beautiful Grand Tetons and Jackson Hole – what more could a girl ask for?

2 thoughts on “Driving our RV Through Yellowstone to the Grand Tetons, and my Birthday in Jackson Hole!”