Breaking Down Tour Options for Glacier Day Cruises in Alaska

When RVers – or any visitors – come up to Alaska, there are a lot of things they hope to see in the Last Frontier. Few things are more exciting though than the multitude of amazing wildlife that roam free here or the incredible number of glaciers there are. I mean, Alaska has over 600 named glaciers – with an estimated 100,000 unnamed – so it just wouldn’t be a complete visit without seeing some! And the variety of wildlife is hard to rival. One of the easiest ways to view both of these things is to get out on the water on a day cruise that focuses especially on viewing wildlife and tidewater glaciers. It can be a little overwhelming trying to decide which tour is best – unless you have the budget and time schedule to do all of them, of course – so I hope this may be helpful in breaking down some of the options out there.

Of those accessible by road, Seward, Whittier, and Valdez are the most popular destinations for these types of day cruises.

We ultimately chose the Kenai Fjords 8 1/2 hour cruise with dinner on Fox Island because we wanted more of a wildlife focus and a good promotional deal helped make our decision on tour companies.

Regardless of tour company, from reading and hearing about other people’s experiences, any choice seems to be a great day out on the water. I can honestly say our day in Kenai Fjords National Park was one of my favorite days EVER. With all of the awesome experiences we had here, I think this may be my new favorite national park, too.

We started out our day a beautiful ten minute walk to the boat harbor from our amazing campsite in Seward Waterfront Park.

It was another lucky, sunny morning in Seward and the boat harbor alone was stunning. 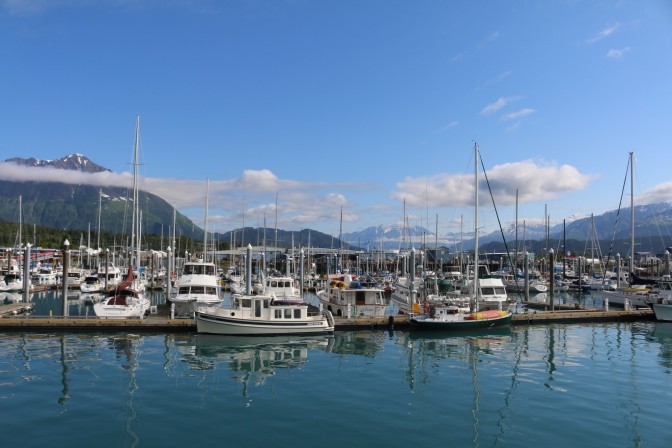 We checked in and waited in a queue line to board the Glacier Explorer!

Seating was unassigned, yet the people who happened to share our table happened to be from the same town where John and Rob grew up. The world is totally small sometimes! As we pulled out of dock, we got some nice views of our “house” on the shore.

We took in the views of the huge, snowcapped peaks around us as we ventured toward some islands in the first fjord that looked as if they could have been transplanted from the South Pacific. Turns out this is because as the Harding Icefield has retreated, temperate rainforest climates have developed in its path due to the amount of rain the area gets. 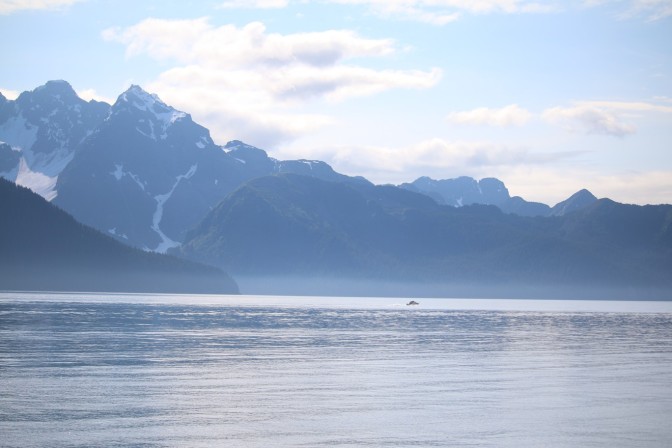 It didn’t take long at all for our first humpback whale sightings, and they just kept coming throughout the day. We must have seen 20 or so, and probably more if we had really been looking! I’m not sure there is anything more exciting than seeing and hearing these enormous animals blow water from their blowhole as you wonder whether where they’re going to pop up next. Our captain was great about stopping the engine in spots where they seemed to be active and following leads from other ships as to where the best sightings of the day were happening. Once you’ve seen a huge whale breach, you feel like you hadn’t really “lived” before this! 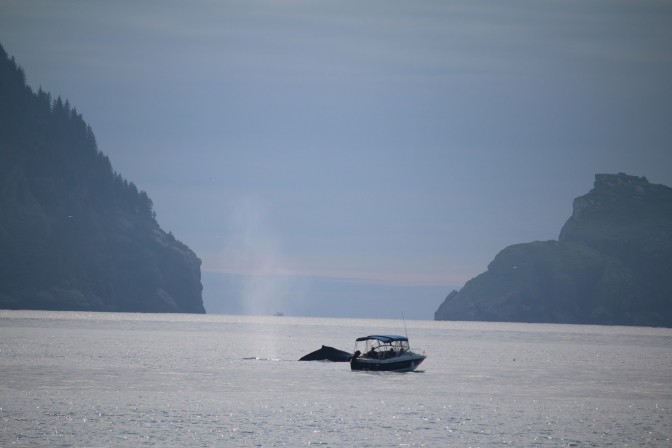 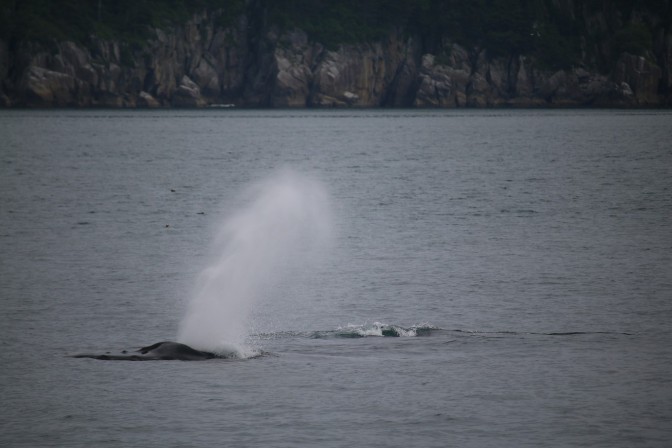 Throughout the day, I was jumping out of my skin to see horned and tufted puffins in the wild, a few rare orcas, adorably lazy looking sea otters, and huge groups of roaring sea lions basking on the side of a gull island. Set against this other worldly backdrop, it truly felt like we were in a movie or something. This just couldn’t be real! But luckily it was… 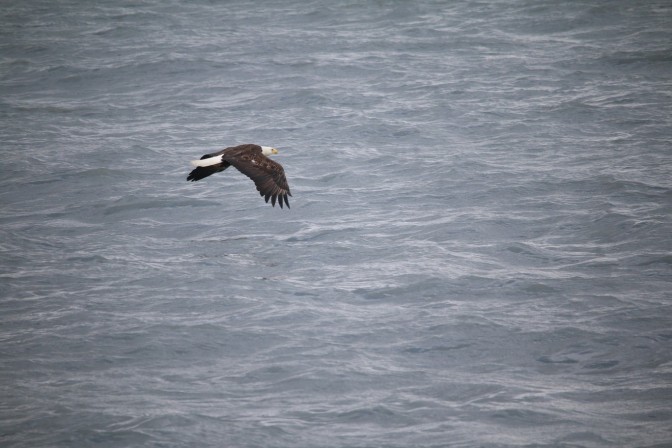 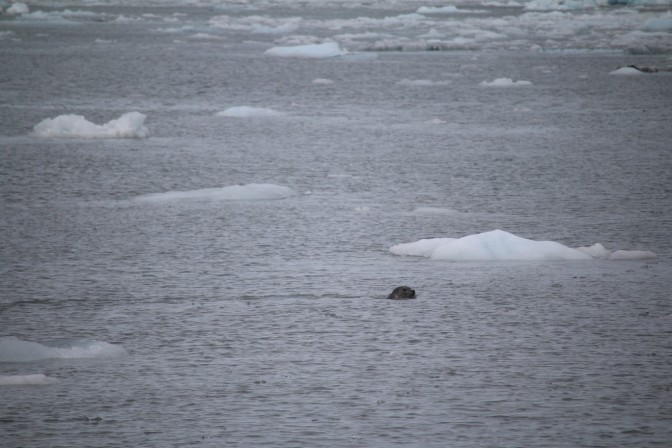 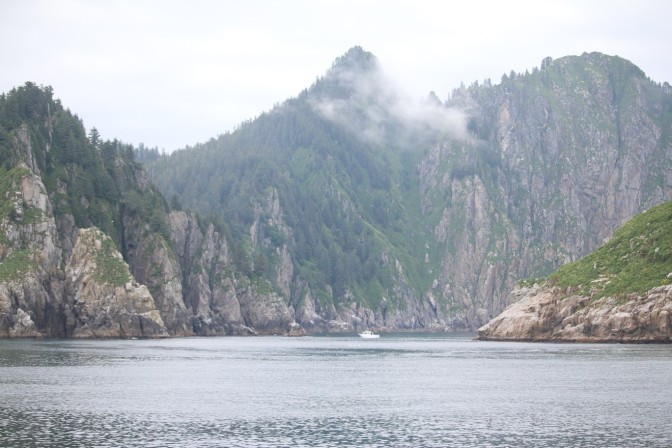 As we headed out of Ressurrection Bay, we could see enormous Bear Glacier in the distance, but Aialik Glacier was the real frozen showstopper of the day. We must have stopped in front of it for 20 or 30 minutes, as we heard the loud cracks and thunderous booms of huge chunks of ice falling off of the glacier and into Aialik Bay. A truly humbling sight and sound highlighting the wonders of nature right before our eyes. 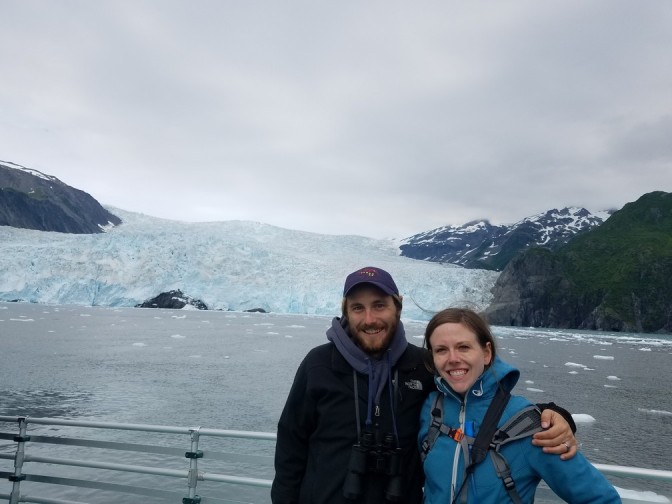 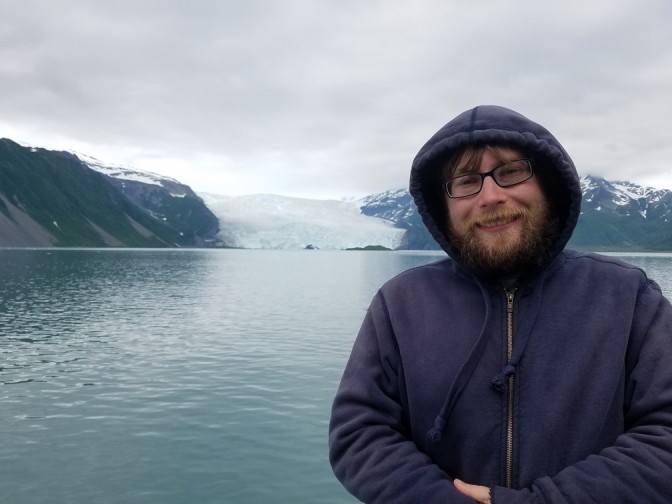 For what sounded like was going to be a long day, it went by pretty quickly. The sights and sounds, and a bunch of friendly people to chat with made sure we were never bored. It was pretty darn cold out on the deck, but I stayed out as much as I could possibly stand while the guys – and most others – ducked in and out of the enclosure. I just couldn’t peel myself away from the scenery or the prospect of seeing more animals!

Towards the end of the cruise, the buffet dinner stop on Fox Island was good but a bit rushed for my taste (and not just because I’m a slow eater). We barely had time to sit down and eat let alone wander around the island. It was a good reprieve from the chill of the boat, but if given the chance to do it again, I probably would have opted for the 9 hour Northwestern Fjord tour option for more time on the water. Next time!

All in, like I said, this was one of our best days in Alaska, if not ever. We’ll never forget that whale breaching or the sound of glaciers calving, and having seen puffins in the wild still kind of makes my life feel more complete.