Our first night in the Fairbanks area was spent at the Walmart with about a dozen other RVs. It was a prime opportunity to pick up some groceries (since much to our dismay, there was no Costco in the area) and while most items were definitely priced higher than we were used to, it honestly wasn’t quite as bad as we were anticipating. They even had Tillamook ice cream from Oregon, which we couldn’t get enough of while in the Pacific Northwest!

After a few other errands, we headed from here to the Chena State Recreation Area, about an hour northeast of the city. There are three state campgrounds along Chena Hot Springs Road, as well as a few pullouts and spots along the river we later realized we could have used. (According to the Fairbanks Public Land Information Center – located in the Morris Thompson Cultural and Visitors Center – any safe looking spot that doesn’t have a sign prohibiting overnight camping and doesn’t show signs of being public property is pretty much an acceptable campsite in Alaska.)

We decided on the Granite Tors Campground at mile 39. Really nothing too exciting about these parks but it was quiet and well located for what we wanted to do in the area. $15/night wasn’t bad, though with it not even having trash pickup at the time, we started to long for the very inexpensive public campgrounds in Canada that sometimes even had free firewood.

We took the Angel Rocks hike our first day there – the trail everyone had recommended to us. A 3.7 mile loop with 900 feet of elevation gain – all of which occurred over the span of 1 mile – it was fairly steep going up and down the mostly loose gravel path. At the top was the change to explore the “angels”, or large granite rock formations. It was definitely cool, but it honestly didn’t blow us away as much it had been talked up to us. 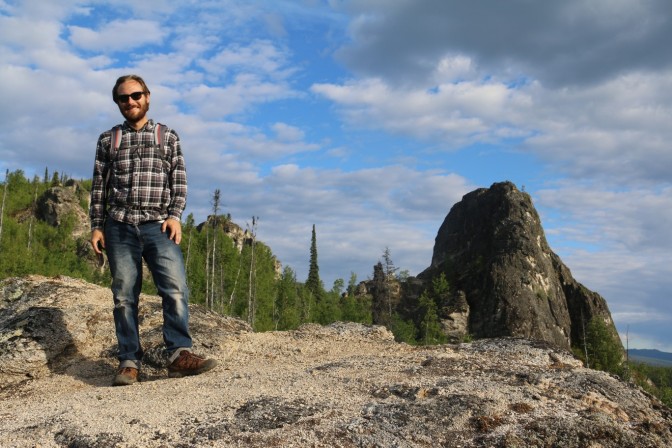 We then decided to take on the Granite Tors Trail. A popular backpackers’ trail, as a day hike it is a 15 mmile loop with 2900 feet of elevation gain. It was to be one of, if not the, longest day hikes we’d done yet. but we had heard good things and we were camped at the trailhead anyway.

We did the loop the unpopular way – counter-clockwise – as this direction would give us the option of turning around at mile 5 or so and still get a glimpse of some of the large granite tors if we felt tired.

The first couple of miles were flat and wooded over a boardwalk that it appeared was soon to be replaced – luckily, since it had clearly seen better days. 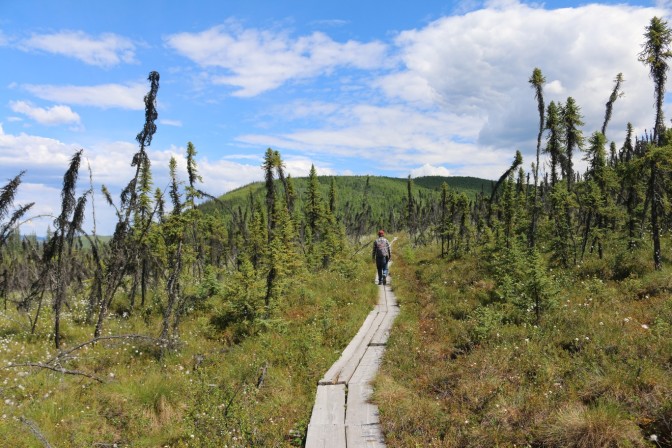 Once the elevation gain started, it was pretty significant but not quite as steep as Angel Tors. We didn’t find much loose gravel here, either, much to my delight. The terrain was mostly rocky and/or muddy in spots, with a decent amount of the trail overgrown with brush. As we headed above the treeline, views of the surrounding area came into view.

Just past mile 5 or so, we spotted our first tors! These towering structures and views of the rolling tundra and distant, yet still magnificent, Alaska Range, left us wanting to see more and pushed us onward. We knew we weren’t too far from Fairbanks, but all we could see up here was untouched wilderness. Not seeing anyone else on the trail made this place feel super serene. 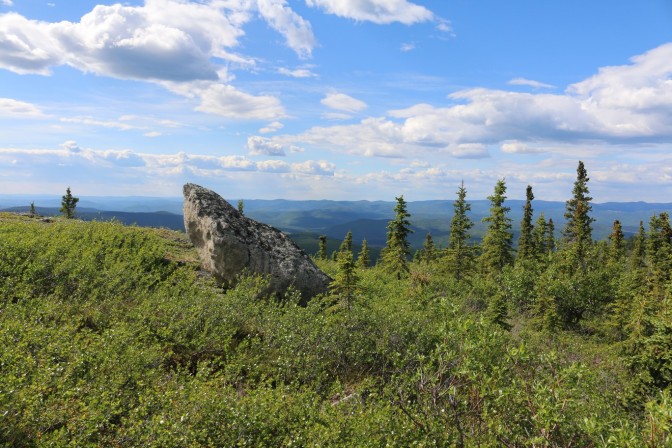 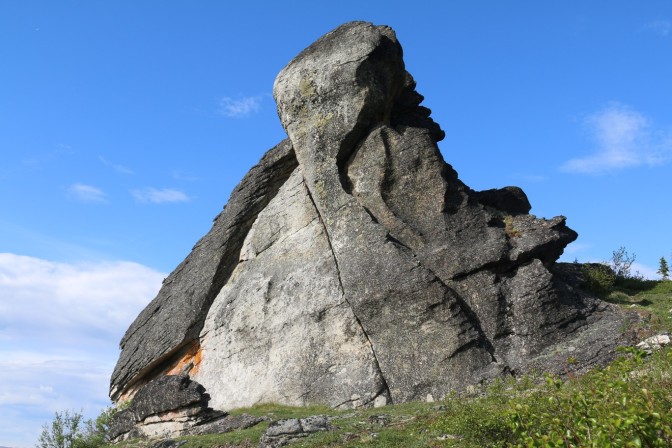 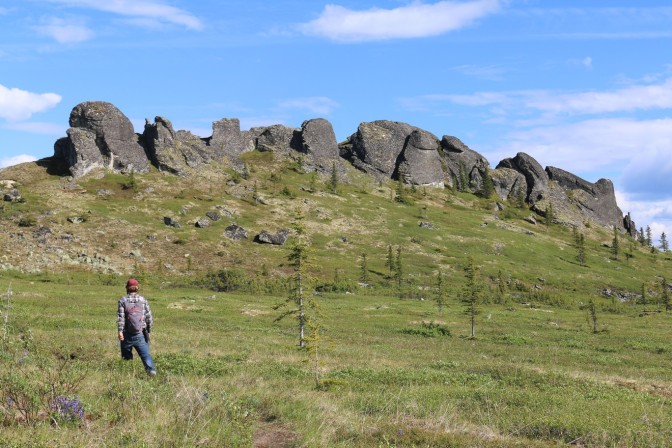 Some excitement came when around halfway through the trail, we spotted some very clear bear tracks in the mud that looked a little too fresh for comfort. We think they were grizzly tracks because of how straight across their toes appeared to be but we’d love to hear other opinions, too. The tracks followed the trail for a while before luckily tapering off as the trail all but disappeared into the boggy tundra save for some trail marking poles. We were armed with bear spray and a good amount of tips for what to do in a bear encounter, but ideally did not want to put them into practice! 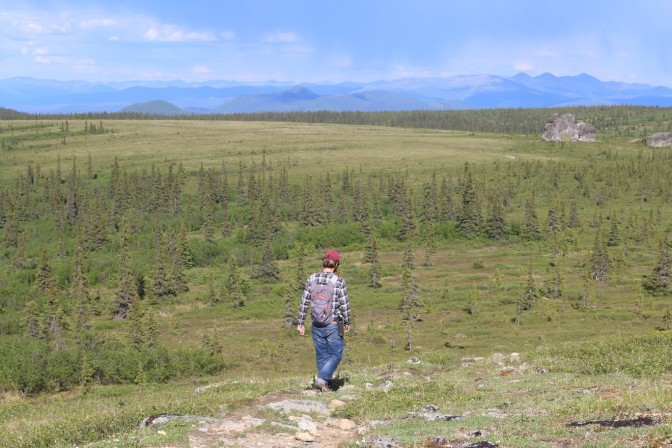 The trail cut past an emergency shelter and outhouse before becoming slightly more shrouded again by brush and trees, with some small boulder fields to be navigated in between.

The rest of the trail continued to offer peeks of views in the distance as we headed deeper into the dark woods, making lots of noise so as not to surprise any other four-legged friends if we happened to come upon them. With five miles to go, we ran into the only other people we’d seen all day.

We didn’t start to feel too tired until the last two miles. I have a feeling wanting to avoid a bear encounter helped keep a little pep in my step, but maybe all of the sunlight had just given us a lot of energy! Regardless, we were glad that we had taken this one on!

We also visited Chena Hot Springs while in the area. Though a little pricey at $15/person, we’d heard a lot about this naturally-fed gravel pool surrounded by boulders so we decided to check it out. Coming with access to the resort’s showers didn’t hurt, either. The hot springs were definitely cool, and seemed to be popular with locals and tourists alike. They would have felt a little more refreshing on a cooler day – it was around 70 degrees Fahrenheit – but it was a perfect day to hang out on their sunny, bug-free patio.