Moving right along on our trek up to Alaska, we left beautiful Fox Lake Campground (an hour north of Whitehorse on 2) on this day to cover another four and a half hours before reaching Dawson City. 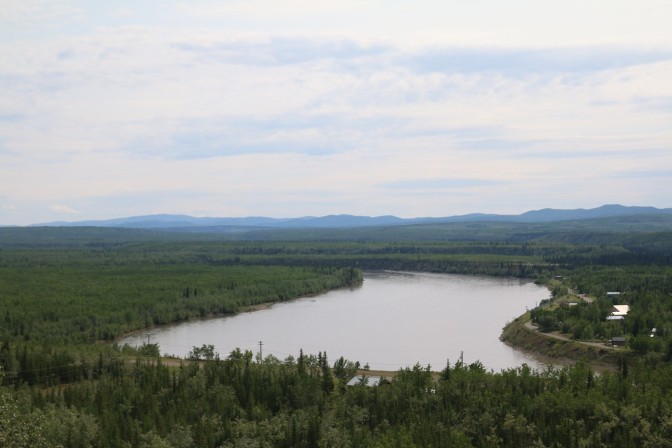 The drive was pretty, surrounded by what I referred to as “pipe cleaner” thin trees – actually just the limit as to how well spruce trees can grow in the tundra – lakes, and the rolling landscape of the Yukon. However, compared to, say, the impressive mountains of 37A, it was nothing terribly exciting and a bit repetitive, aside from watching for the frost heaves and recently filled potholes everyone had warned us about. We were happy to find a little intermittent cell reception passing through the communities of Carmacks and Pelly Crossing though. All three communities that we passed through – Carmacks, Pelly Crossing, and Stewart Crossing – had gas facilities but we made the mistake of assuming that the comparatively larger town of Dawson City would have cheaper gas. BIG mistake! It turns out that Dawson City has some of the most expensive gas you’ll find anywhere on your route up and each of these other communities were at least 10 cents cheaper per litre. Rats! Next time…

We had a couple of options for the area, including two government campgrounds – Yukon River and Klondike River. We’d read of some people stealth camping downtown but it seemed as though this would be a little easier and more couth in a smaller rig.

We went with Klondike River Campground as we were planning to take a day trip up part of the Dempster Highway to see Tombstone Territorial Park and this was in between the Dempster and Dawson City. Being only fifteen minutes from downtown, we actually had cell reception at this site – a rare treat as of late! (Or a curse, call it what you will…) While it was nothing terribly unique, it was another nice, very affordable Canadian public campground with decent spacing between sites and free firewood. 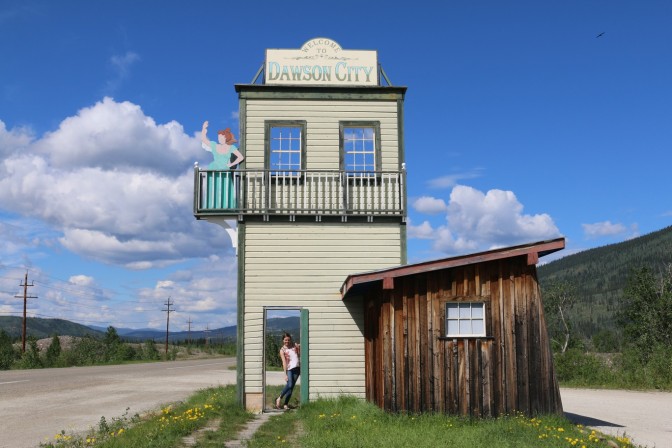 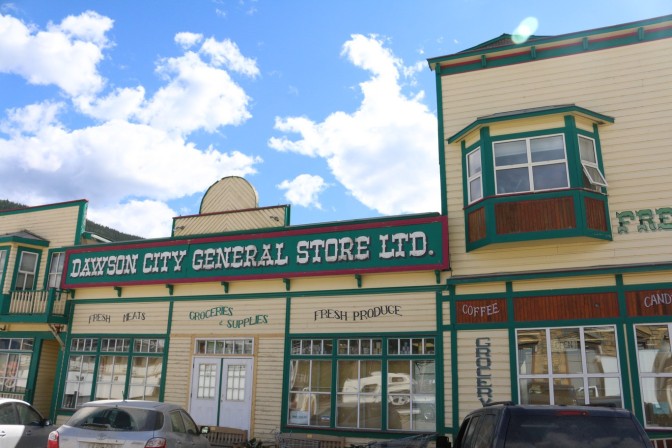 Dawson City was at the heart of the brief Klondike Gold Rush. Home to 40,000 prospectors in 1898, the population took a nosedive along with the mining prospects the following year and only 8,000 remained. Today, it is home to approximately 1,400 people inhabiting the so-called “Paris of the North”, with its current bread and butter being tourism and yes, a resurgence of gold mining industry.

Diamond Tooth Gertie’s – perhaps the town’s most popular establishment – is housed in a building that has been host to social gatherings since the Gold Rush days. It was originally built to house local gatherings of the “Artic Brotherhood” – a trans-Canada/Alaska secretive “brotherhood of the North, where men from all parts of the world could meet and get to know one another” over lots of libations and merry making. As the mining industry and group dwindled, it subsequently served as a meeting place for the Fraternal Order of Eagles and as a community centre before the visitor’s association decided to turn it into a tourism-attracting casino in the 1970s.

In one large room, Gertie’s houses several slot machines and table games, features a bar and table service, and offers nightly live entertainment at 8pm, 10pm, and midnight – currently the only place of its kind in Canada. We initially weren’t sure it would be quite our cup of tea but when a couple of young Yukoners suggested we check it out, we made sure to stop.

There was a $12C cover charge per person. Since our admission cards were good for our entire stay, we could come and go as we pleased and it was cool that funds went to local restoration projects. The fact that it included several live shows made it kind of a bargain, actually. The building is very unassuming from the outside and the inside has a purposeful Vaudeville era feel, with some patrons even getting in on the fun by dressing up in big gowns and top hats. Some staff told us that we were there on a particularly busy Saturday night, but the vibe was definitely a party. Filled with tourists, locals, a bachelor party and even a wedding party, everyone seemed to be enjoying themselves and having a great time. 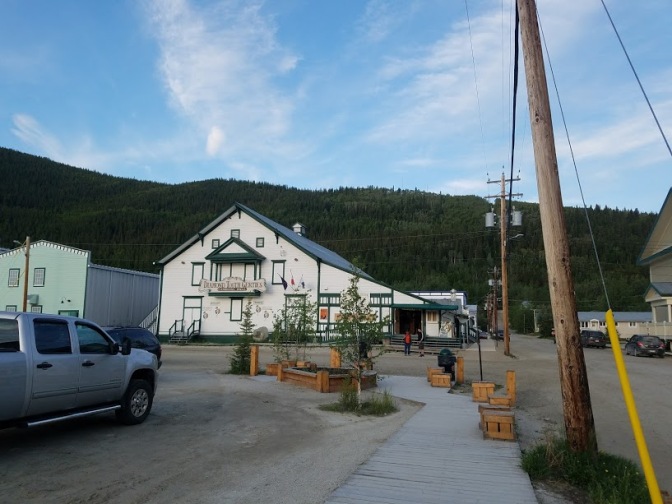 We grabbed some reasonably priced Yukon Brewing Company drafts and had a good laugh at their more expensive import bottle list that included the likes of Bud and Miller Lite. We stayed for the 10pm and midnight shows, taking a break to walk around town in between. The 10pm show was a fun, Gold Rush themed theatrical show highlighted by audience participation in which four guys were picked from their seats to do can-can dances in big skirts – and some really got into it. 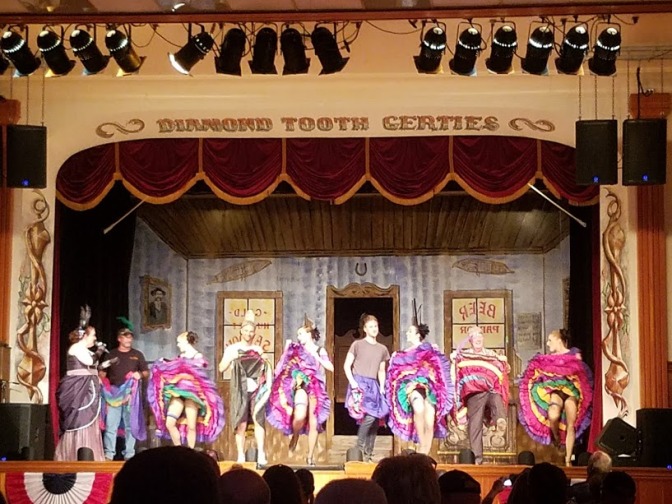 The midnight show was flashier and definitely our favorite of the two. Think burlesque meets ’80s song covers. Sounds pretty weird but it was a fun time put on by some talented performers that made us glad we stayed out late. 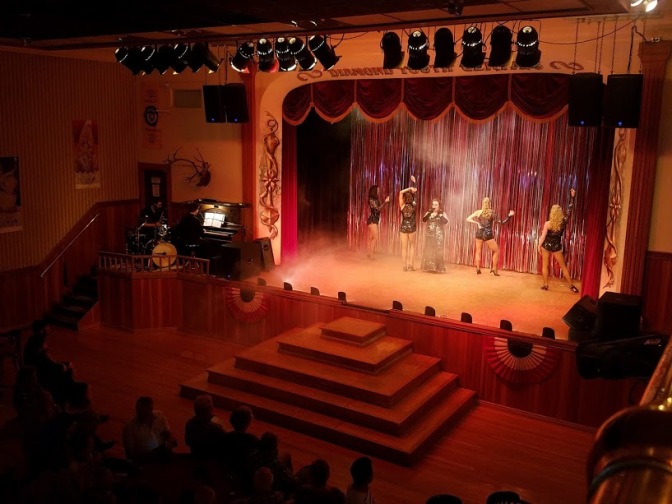 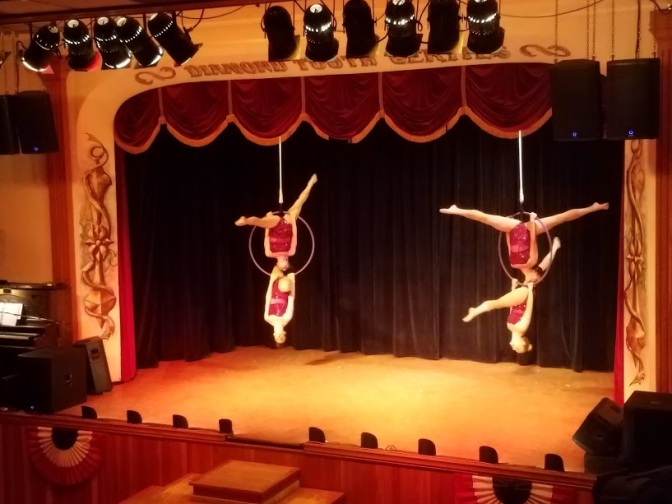 Walking around town in between shows had to be one of the most disorienting “where am I?” moments we’ve had yet on the road. As if walking out of a casino at 10:30pm and still needing sunglasses wasn’t surreal feeling enough, the town gave the appearance of a well-preserved nineteenth century ghost town while groups of young bar hoppers, a late night pizza counter, and the sounds of karoake bars made us feel like we were in a bigger and younger – but very quiet – city. It almost felt like if a town like Deadwood, South Dakota had a yoga studio, a short film festival, and a ladies wrestling team to complement its casinos and saloons. It was a very weird vibe that I don’t think my description can even adequately communicate but we liked it a lot. 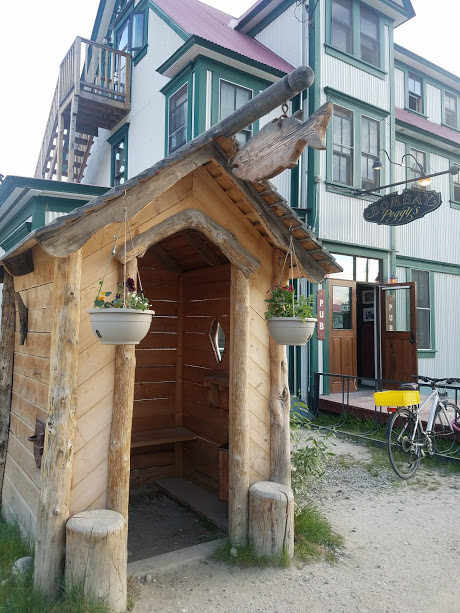 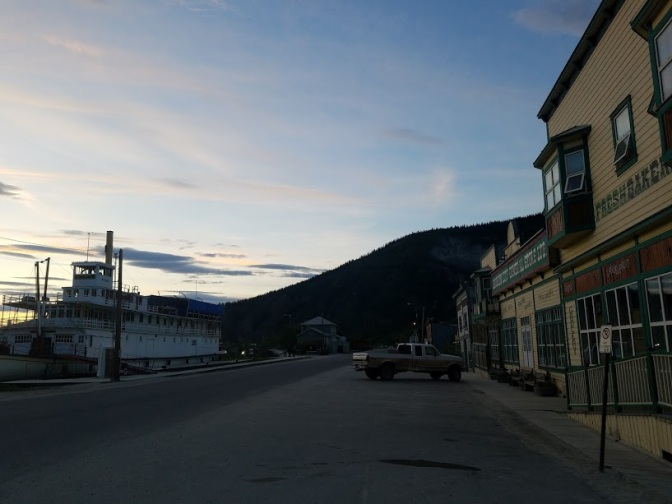 We discovered some quirky facts about the area during our stay that further added to the mystique, like:

*The town is home to the sourtoe cocktail, garnished with one of several REAL preserved human toes lost to frostbite in their subzero winters. I still can’t quite wrap my head around anyone wanting to drink this but I’m still pretty fascinated that it exists in today’s very regulated world and that they needed to implement a $500 fine because people kept swallowing them. Gag and gag again! But still, a crazy novelty that we didn’t have the guts to try. (Okay, John said he would have if presented with one but I told him I wouldn’t kiss him for a year if he did…)

*A collection of silent film reels was found preserved in the frozen permafrost soil under the local hockey rink that is now looked after by both Canada’s and the US’ federal governments. (We can’t wait to check out the new documentary about it when we have tv and wifi again!)

*Author Jack London set up shop in this area for a year in his prime, and his experiences served as inspiration for his most famous works, The Call of the Wild and White Fang.

Driving home in the midnight sun and navigating around a family of foxes just chillin’ in the middle of road just added to the odd and unique experience of this historic town – er city – er, the “town of the city of Dawson” now according to the Yukon government.

Though it cost a few more bucks in gas than we were hoping, we were glad to have made this memorable stop and looked forward to more character-filled places to come.