From the start of our trip five months prior, the Narrows were on our radar. Not sure if we’d ultimately feel like trudging through a cold river for miles once we reached Zion National Park in autumn, we slept on the topic. But by the time we were close to Zion, we were practically dying to do it.

One of the world’s most famous trails, the Narrows takes hikers on a water-logged adventure through the Virgin River and the most famous slot canyon in the world. Not being backpackers (though John would like to be, but since I struggle to just carry my water and a jacket on a hike and REALLY like the comfort of our dry, clean, and bug-free bed, I’m not quite ready for it), our only option was to do the hike from the bottom to five miles out, past which permits are required.

The Narrows are most popular during the sweltering summers at Zion, where the water and shade are a great reprieve from the heat. It is less popular in the cooler months, and not surprisingly so, as the water temperature when we were there in early November was around 50 degrees Farhenheit, with air temperatures topping out around 70 degrees F, and lower than that in the shady canyon. Luckily though, there were nearby outfitters that rent dry gear to keep hikers comfortable in the chilly water (we went with Zion Outfitters). We rented the dry pants package, which included dry pants that went over our regular hiking clothes, a good, sturdy pair of boots meant for trekking through water, a pair of neoprene socks, and a wooden walking stick (whose sturdiness and width works better than regular metal hiking sticks). We also rented a waterproof backpack, but probably would have been okay without it given the mostly knee-deep water levels this time of year.

The day of, we first double checked that the weather forecast was still going to be clear, as FLASH FLOODS DO KILL PEOPLE ON THIS HIKE because rainwater literally has nowhere to go and neither do hikers unless they can climb hundreds of feet of slickrock. Not trying to be dramatic, but four people died the same week some friends of the family did it so just felt the need to put that out there! Luckily, rangers post the forecast and flood possibility every day, so just be sure to check it, okay??

We then picked up our gear around 8:30am, slugged it on, and caught the shuttle from the visitor’s center next to South Campground where we were staying.

We took it to the end of the line – to the Temple of Sinawava stop, where we made sure to use the restroom one more time. Since there is nowhere for it to go but downstream or to wash up on the shores of the narrow canyon, the Narrows carry a strict policy that while you are permitted to pee in the water as you can, you must pack your business out and since we weren’t equipped with any “poo powder”, we really wanted to avoid this…

The first mile of the hike is the paved Riverside Walk trail that overlooks the Virgin River and some of the canyon. The trail eventually reaches a point where you just can’t go on unless you are willing to venture into the water as the high canyon walls close in and leave room only for the river to rush through and the occasional small strip of land. 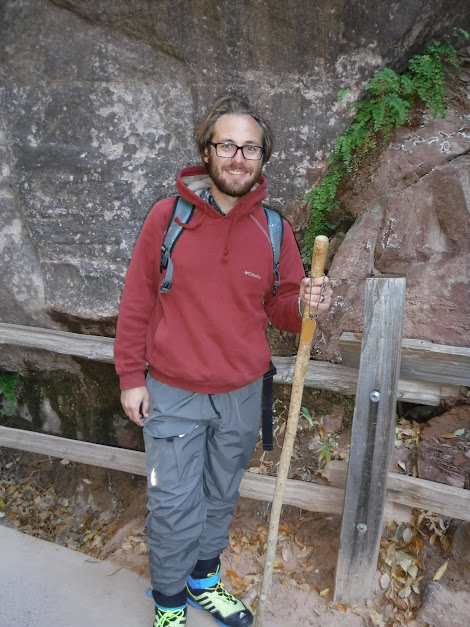 The first few steps felt a little weird as water rushed into our boots and we adjusted to getting our footing on the slippery rocks against the current. When the park rangers had told us to bank on 60-90 minutes per mile going upstream, we figured we could do it faster since we typically go quicker than most estimates. Upon entering the water though, we realized this was no joke. We really did have to take our time to blindly feel out our footing and push against the rushing water, not to mention watch to avoid the deepest water or the toughest currents (some of them really got our blood rushing!), even though water levels were comparatively low this time of year and only knee to waist deep at most.

As we hiked, we saw a lot of people with rental gear on, but a lot without it, too. Since we found ourselves needing our jackets to keep warm most of the hike even with the dry gear on, I really have no idea how some people tolerated the cold water and chilly air in shorts and regular sneakers! Not to mention, navigating the strong currents was sooo much easier with the walking stick…

As we pushed onward, it was an odd feeling – we felt tired and we didn’t. We were using muscles we weren’t used to using and certainly had to use a decent amount of energy, but since we were moving slowly and meticulously and had to concentrate on what we were doing, it was more of a test of stamina than anything.

We saw most people kind of drop off about two miles into the water, once we reached the end of Wall Street, the narrowest and darkest part of the canyon and where it can get as narrow as 20 feet wide. This really is a fine place to stop, but we wanted to push on to do the full five miles out and back. 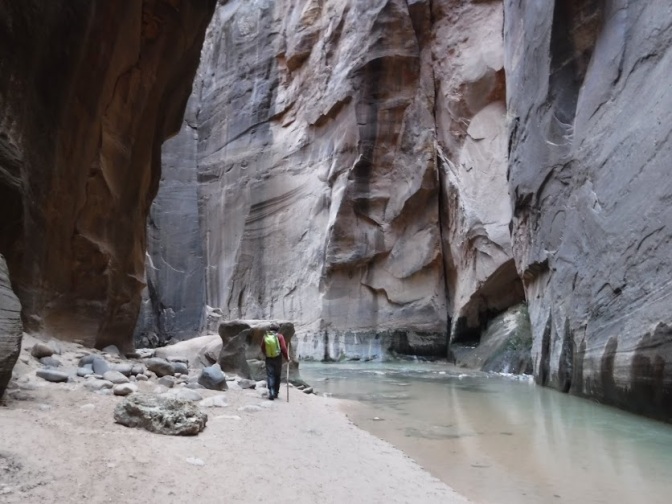 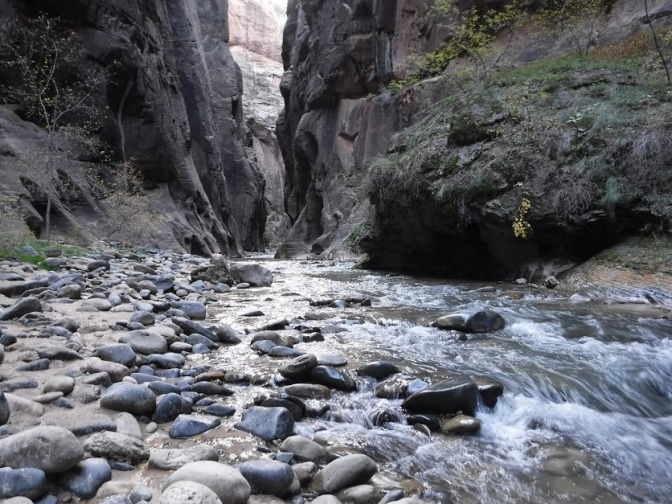 As we persisted, the scenery really did get even cooler and the trail more surreal as we passed fewer and fewer people. 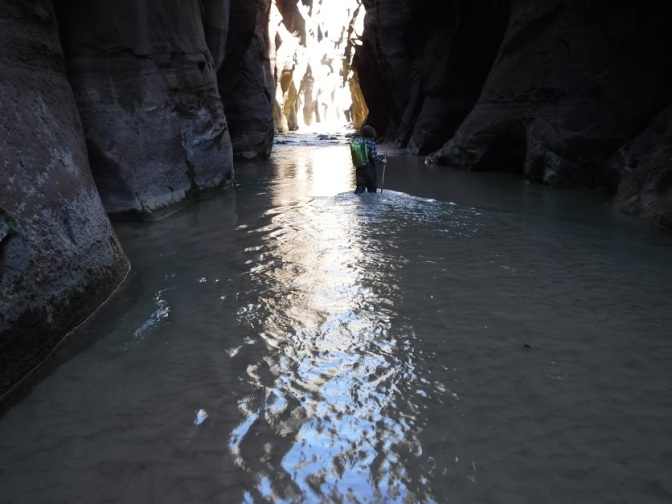 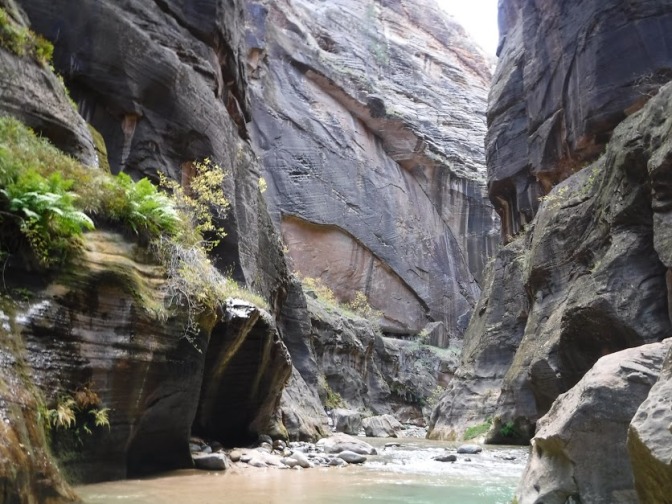 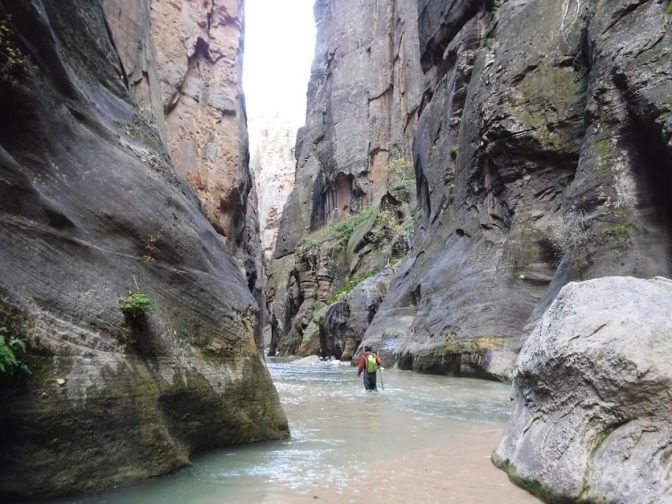 There were a few groups ahead of us at this point and we watched all of them turn around, reporting that they still hadn’t reached the end, but felt their bodies were telling them it was just time to turn back. This didn’t make any it easier to keep going, nor did some of the log jam/boulder obstacles we had to get across to avoid chest-deep rushing water. But we did it and pushed onward until we reached the waterfall that marks the end of the non-permitted area.

The waterfalls themselves really were not very impressive but I think we were more excited to see these any other waterfall, probably ever. Maybe it was because it had taken us four hours to get there, or because on this particular day, we didn’t see anyone else reach it for some reason. (Though we realized one couple who had told us they couldn’t find the end must have stopped a mere five minutes too early. We really wanted to run to tell them, but there was no way we’d catch them.). Regardless, we felt super accomplished and ate our lunches in solace on a small stretch of dry land by the waterfall. 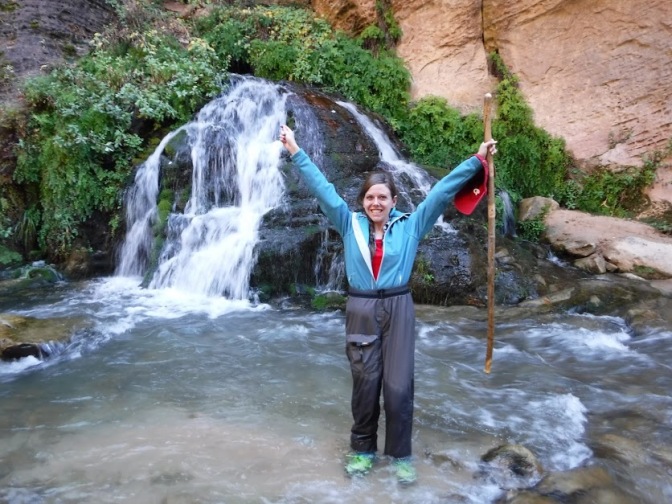 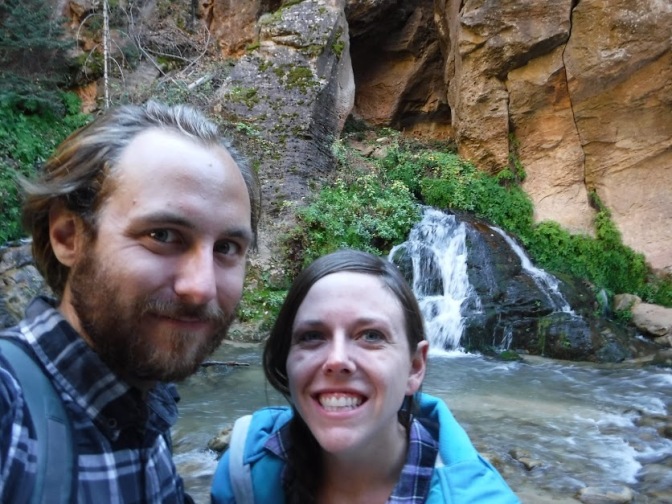 Heading back downstream with the current was much, much easier, as we had hoped it would be. It probably helped that we had gotten a feel for how to navigate the water, too. We physically felt great until the last mile or two in the water, when our toes started to rub together and boots started to feel heavier as we kept falsely thinking we were close to the end.

We made it though and were almost sad to get out of the water, as wobbly-legged as we were. Not just because it was more fun, but at that point it actually felt easier to walk through the water than it did on dry concrete. This made the last mile feel like the hardest part of the day, even though we powered through it quickly just to get it over with.
We collapsed on the shuttle bus, still feeling water slosh around in our boots. The whole ten miles took us about eight hours, including eating lunch – about what the park ranger had estimated. It really was a truly unique experience and one of our favorite hikes so far. Trudging through water doesn’t sound like that much fun on the surface, but the fact that it is so different than your average trail – not to mention the stunning scenery around you – makes it just feel special and unique.

We came to appreciate that we came to Zion at a great time of year also. In the autumn, temperatures were comfortable, water levels were low, crowds were smaller, and there was even a little fall foliage! But we think the Narrows would be a great experience most any time of year as long as water levels are safe (early spring is probably the worst bet).
Have any of you ever hiked the Narrows? What were your impressions?

3 thoughts on “Zion in Autumn: Hiking the Narrows”