My memories of learning about giant redwood and sequoia trees date back to elementary school. I can still picture sitting at my desk, being mesmerized by the wonder that trees that big could really exist on Earth, and in the back of my mind, never forgot that feeling.

After having the tongue jack overextend and break on our camper while outside of Yosemite (always err on the side of using more leveling blocks, we now know!), we were unsure if we would be able to make it to Sequoia National Park before hitting Los Angeles for the Bruce Springsteen meet and greet. I really wanted to see it, but we just weren’t sure if it was in the cards for us, depending on the time it would take to get the part serviced. After being told that it was irreparable and could not be replaced under warranty, we were, much to our chagrin, $200 lighter for a new jack, but at least we had some extra time on our hands.

We camped at a U.S. Army Corps of Engineers park called Horse Creek Campground, twenty minutes from the South gate at $20/night. A large, beautiful park among the foothills of the Sierras, it was almost deserted in late September, but we weren’t complaining. 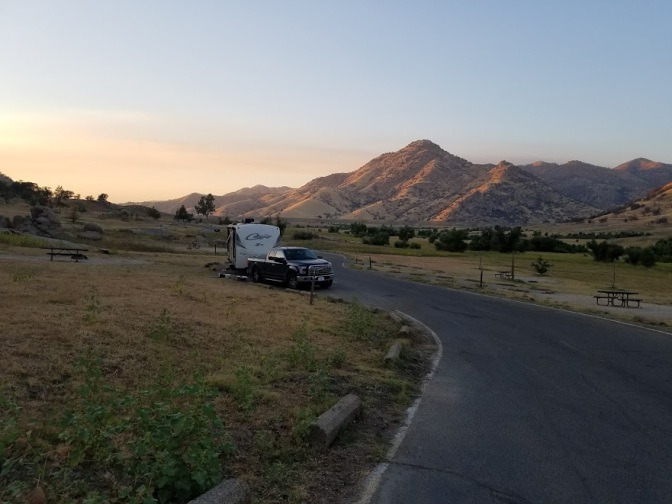 The drive into the national park was a winding one, filled with hairpin turns as we climbed up to the elevation in which sequoias thrive, between 5,000 and 7,000 feet above sea level. The state of California, specifically west of the Sierra Nevadas, is the only place in the world to naturally support this world’s largest species of trees – the only place in the world! (California, coincidentally, is also the only place to support the taller and thinner, yet still massive coastal redwood trees on its Northwest Coast.) Though there are smaller groves in Yosemite (closed until 2017 for renovations to the buildings and parking around it) and neighboring Kings Canyon National Parks, the largest remaining concentration of sequoias exists in the Giant Forest at the heart of Sequoia National Park.

As we approached the Giant Forest still driving, we could see some of what I keep referring to in my head as the “gentle giants”, right by the road. We had seen a handful of large trees in Mount Rainier National Park, Olympic National Park, and the Muir Woods, but the biggest were always kind of standing alone and made into an exhibit. The average of these sequoias, however, were much larger and were just sitting modestly by the side of the road like any other tree. This was the reason I was excited to come to this park, to be immersed into this magical feeling forest that was larger than life, and it looked like I was not to be disappointed.

After getting some suggestions on hikes from a park ranger at the initial visitor’s center, we decided to park in the designated area for the General Sherman tree as our starting point. The General Sherman is the alpha of all sequoias, trees, and really, all living creatures, existing as the largest known living organism by volume in the world. Again, the largest in the world! Hard to imagine. But at a height of 275 feet, a width of 100 feet, and a modest weight of 2.7 million pounds, it is also hard to imagine something being larger. The General Sherman is estimated to be 2,100 years old as well, but appears to not have reached its golden years yet, as sequoias are known to live up to 3,000 years. (Again, just simply amazing.) The display board also described its volume as being equivalent to enough water for the average person to take a bath every day for twenty-seven years, which I found amusing.

The General, naturally, is the biggest draw for visitors in the park, so it is always crowded with photo opportunity seekers. We were lucky to sneak this one in though.

We then headed down the paved Congress Trail to the Alta Trail as the number of gentle giants grew amidst a mixed conifer forest. We accidentally took the four-mile long Wolverton Cutoff, the opposite direction we meant to go off of the Alta Trail, but we were glad that we did. As soon as we took this turn, the trail turned to natural dirt and the crowds all but disappeared, leaving us to enjoy this wondrous forest practically all to ourselves. 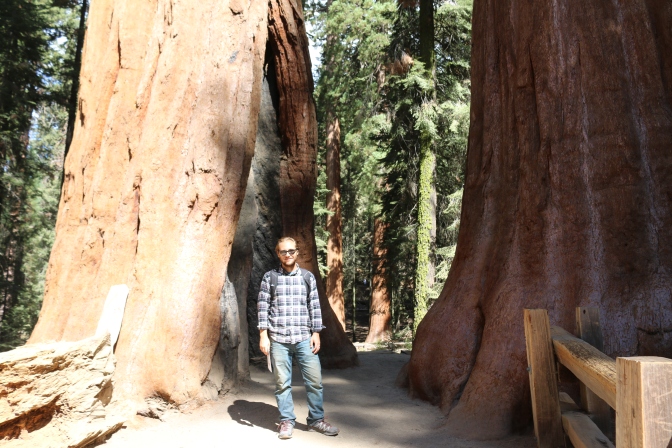 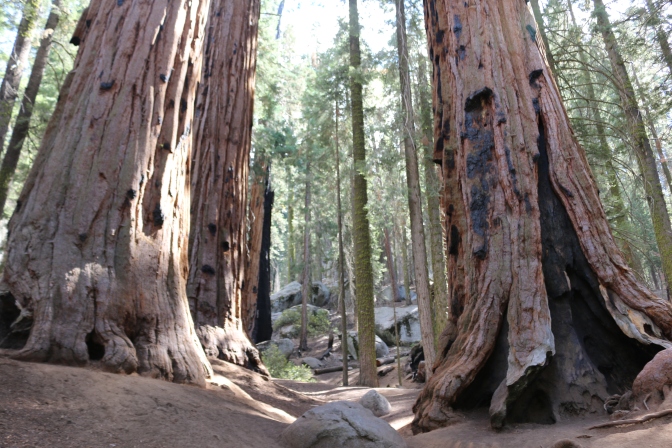 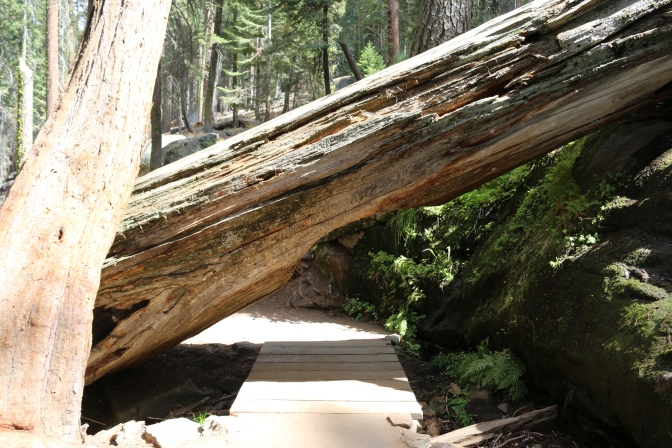 I love just the appearance of the sequoia tree – its rich, reddish-brown, foot-thick bark almost appears to be made of chocolate to me. This might make me sound like I just have an insatiable chocolate fantasy, but they almost look as though you could just take a bite out of them! (Or, maybe it’s just me, but I think anyone would agree that they are beautiful trees nonetheless.) To walk among so many is a surreal feeling as their towering height and volume dwarf any person who approaches them and make it feel as though you are more likely to see a dinosaur come around the corner than another hiker. The bright green underbrush just added to the mystique as well.

It was fascinating, too, to observe the burn marks that crept up the trunks of many of the giant sequoias. Sequoias are very resistant to forest fires, as displayed by their three thousand year life span. In fact, fires are actually imperative to sequoia’s growth, decreasing their competition for nutrients and creating positive conditions for their seeds to be released. The extent of some of the burn marks though still make it seem amazing that the trees are still alive and standing. 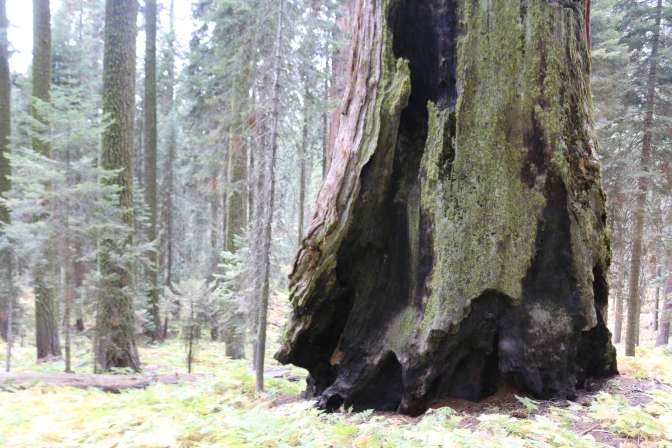 As we continued along the Wolverton Cutoff, the sequoias decreased in number as we approached some clearings in the trees and a significant decline in elevation that made us sure glad that we were approaching from the direction we were. We also had to fight off an almost unbearable number of flies attacking our faces and every body part as we walked. We turned onto the High Sierra Trail and eventually came upon the biggest clearing yet, called Eagle View. We had seen it on the trail map (which was more than worth the random price of $3.78, by the way!), but had no idea what to expect. What we found was a spectacular view of the Sierras as hazy rays of sunshine beamed over them. And we had it all to ourselves, making it that much more special as we paused to refuel and take in the views that literally took my breath away. It is that much more amazing to come upon stunning scenery when it is unexpected. 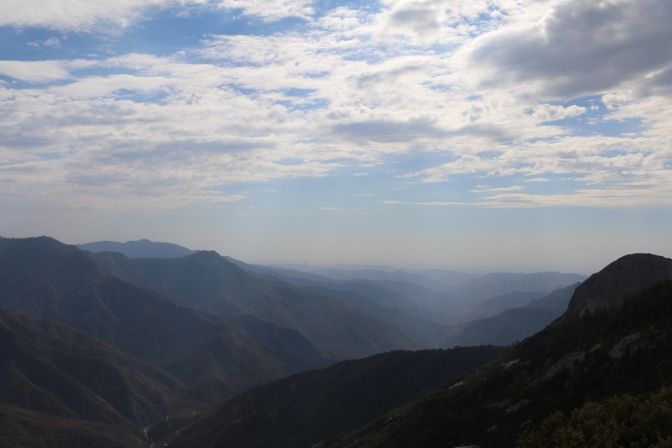 The flies continued but eventually dissipated as we went along. We soon walked parallel to Log Meadow as the giant sequoias came back into view. We had many options on the trails from here to get back to where we had started, but turned toward Tharp’s Log at this point. Tharp’s Log was one of several hollowed out fallen sequoias in the park that had fascinatingly been made into a cabin and inhabited by pioneers.

We then saw a few of the trees that had been labeled specifically for unique characteristics, such as “Chimney Tree” and “Bear’s Bathtub”. 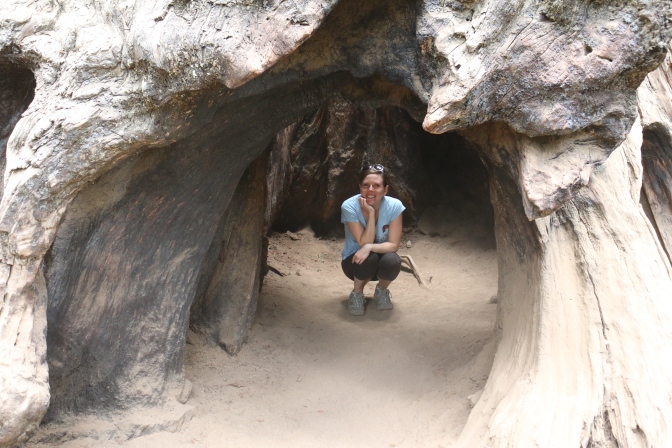 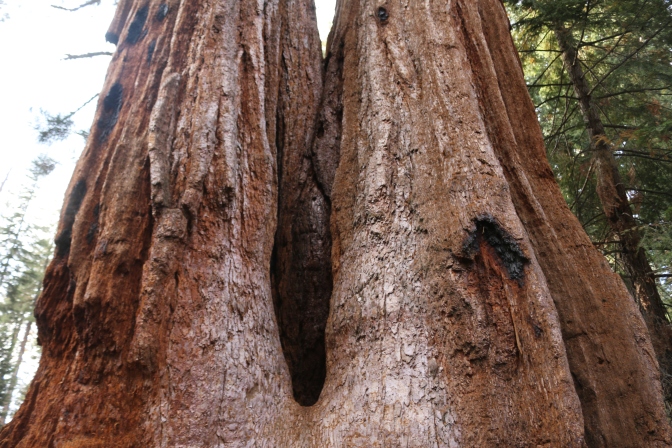 From there, we headed straight up the middle of the Giant Forest to take in more views of our new favorite forest. 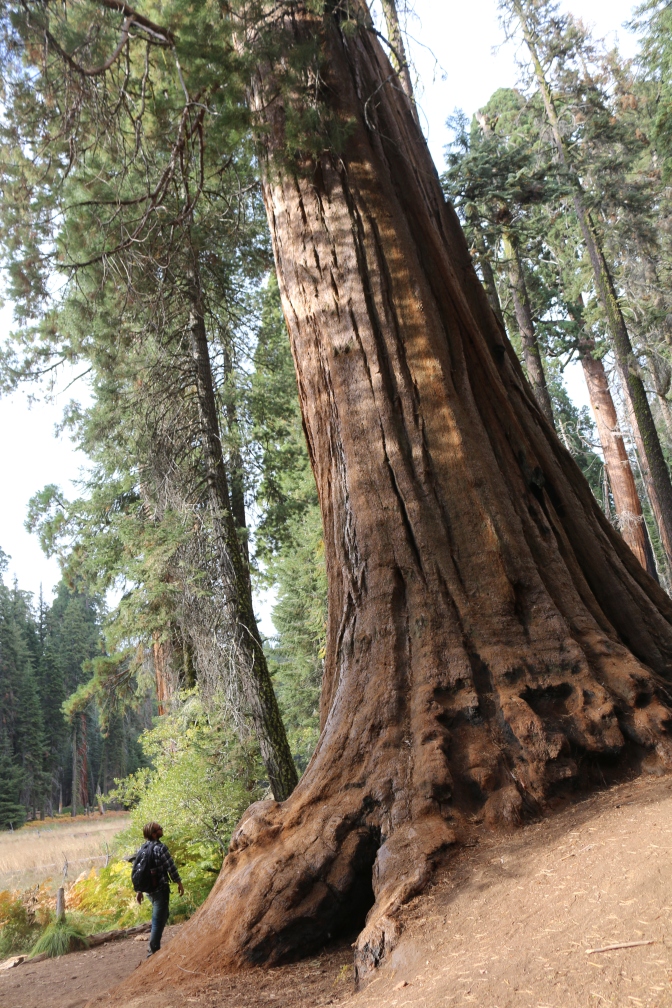 We took a detour along the Congress Trail to see more of the exhibited trees – the “Lincoln Tree”, the “McKinley Tree”, the “House” (a closely formed group of sequoias), the “Senate” (similar to the “House”, unsurprisingly), the regal looking “President”, and “Chief Sequoyah”, which was disappointingly a bit ugly (in fact, I can’t even find the photos I thought I took of it!). 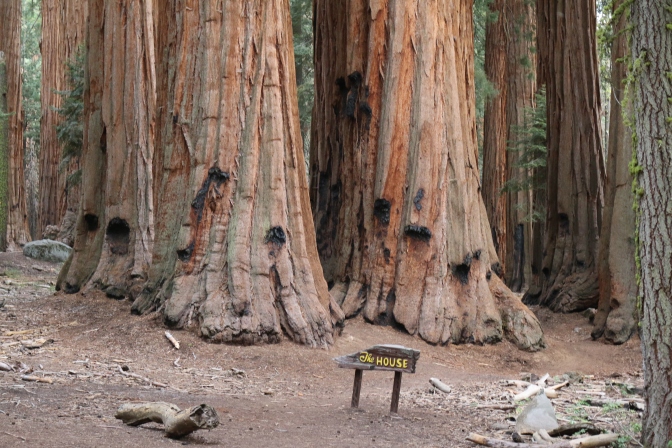 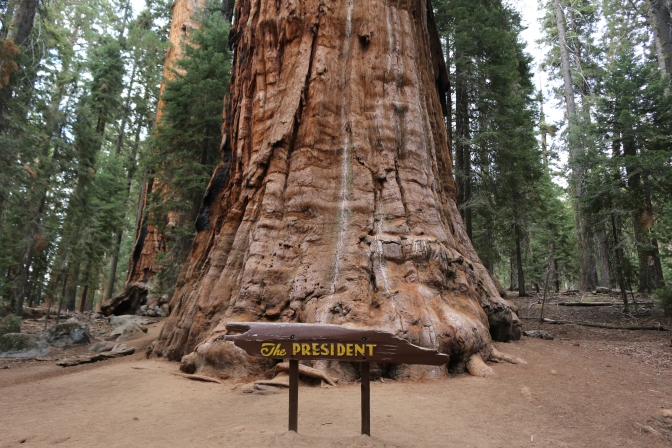 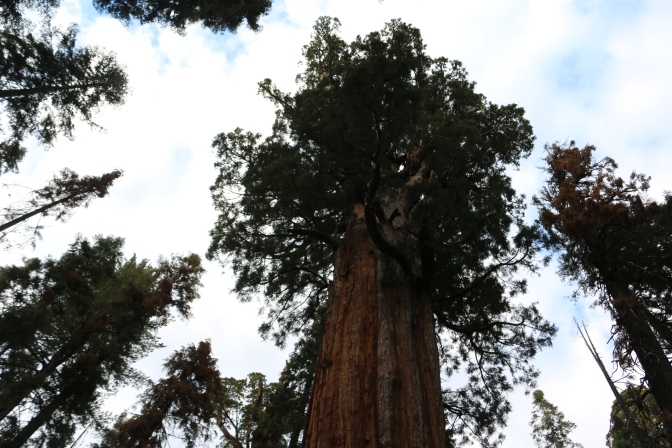 After our then twelve-plus mile, winding tour of the Giant Forest, the 200-foot elevation gain towards the parking lot felt more strenuous than we expected it would. The day as a whole saw mostly gradual gains and losses in elevation, but between that and all of the stops for photos, it was enough to take a lot out of us! Every step was worth it though as Sequoia National Park had quickly become my third favorite behind Glacier and the Grand Tetons. This sunset as drove home was just the icing on the cake, as if to say, “I’m glad you could come”…