At the start of our trip, I had hoped to see games at various baseball stadiums around the country as part of our itinerary. I was thrilled to see a game at Wrigley Field, but other stadiums just proved a little difficult, either because of the team’s schedule or our proximity to cities limiting the time we’d have downtown.

When we came to the Los Angeles area, the Dodgers were playing the Giants in San Francisco (ironically, because they played each other in L.A. while we were in San Francisco, and I would have loved another opportunity to see Chase Utley, not to mention, now Carlos Ruiz). But since Dodger Stadium is iconic and now the third oldest stadium in the country, we decided to take a tour. I’d really enjoyed tours of Citizens Bank Park and Fenway in the past, so I was excited for this one as well.

The Brooklyn Dodgers, or the “Trolley Dodgers” as they were originally known as fans had to literally dodge a hectic streetcar system in New York to reach the stadium, moved out to California in 1958. Along with the Giants, they moved to the West Coast to spread baseball to this part of the country.

The Los Angeles Dodgers played their first few seasons out West at the famous Los Angeles Memorial Coliseum, which opened in 1923 and is still operational, having hosted thousands of sporting and musical events, as well as two Summer Olympic Games over the years. The first game played in Dodger Stadium was on April 10, 1962, which is why the stadium to this day has a gloriously retro feel, and a well kept one at that, with great attention paid to landscaping and a fresh coat of paint applied every year. In fact, you can literally imagine Frank Sinatra in his heyday hanging out with this Rat Pack pals here, as they still have his designated chair displayed in the halls! Another proud New Jersey moment for this trip – to sit in the Chairman’s chair! 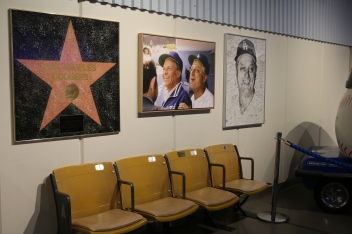 The tour started in the upper decks of the stadium overlooking the field. The stadium was the first of its kind to construct its upper decks in such a way that spectators did not have a bunch of poles obstructing their views, as in the other older parks. The tour guide also told us that the different colored levels of seats (yellow, light orange, turquoise, and blue) represented the different geological features of the area – the desert, the beach sand, palm trees and the ocean. Don’t quote me on this because I cannot remember if he said that this was true or whether a kid pointed it out to him, but I like it either way! 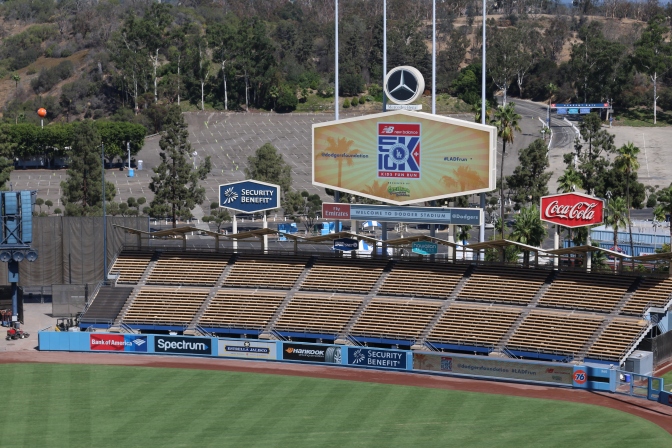 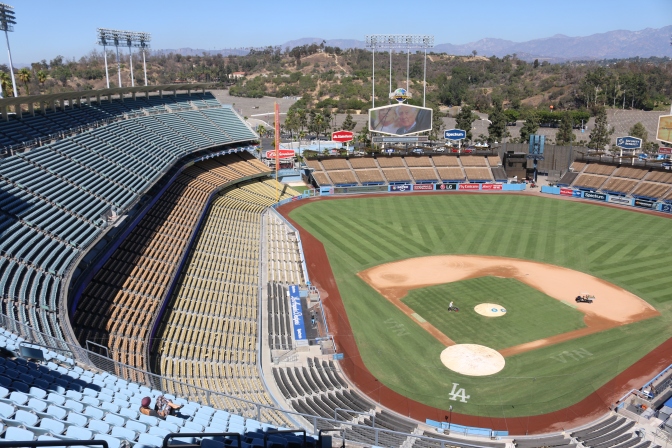 The stadium has the largest capacity of any MLB ballpark at approximately 56,000 and is the only one to have a symmetrical outfield. Maybe there is something to this as it is known as a pitchers’ field with twelve no-hitters in its lifetime! Views are beautiful of the San Gabriel Mountains behind the hexagonal scoreboards in centerfield, with views of downtown L.A. from the parking lot and upper decks, including the infamous Hollywood sign. Not to mention that palm trees abound. Maybe it’s because I didn’t grow up around them, but palm trees tend to make any place feel special to me.

We were then taken into the Tommy Lasorda room, decorated with unique memorabilia related to the club’s most revered, pasta-loving manager and and where Tommy is said to spend a lot of time during the season. I tried to forget the fact that he is known to hate the Phillie Phanatic and took in the atmosphere as we watched a short highlight reel (our tour guide had a fun time picking on us and another Phillies fan throughout the tour). 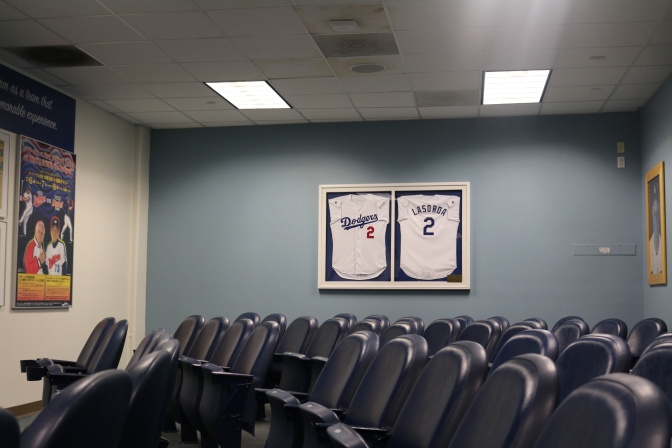 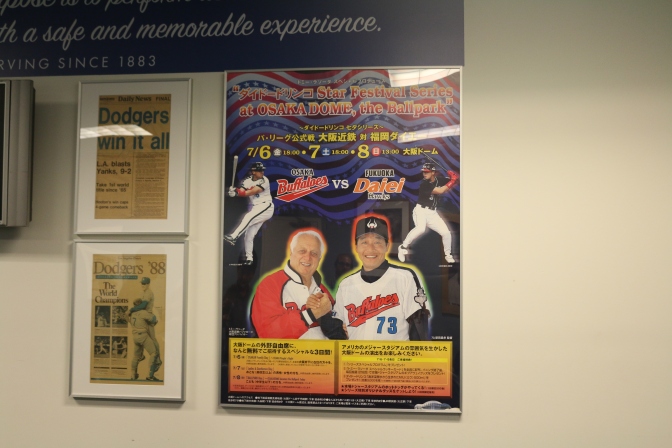 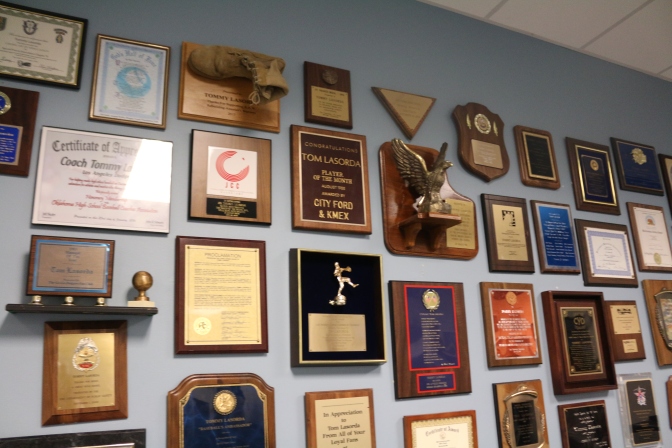 The tour then took us down to the press box, which consists of several rows of exposed seats under an overhang adjacent to the announcer’s box. I always love this part of any tour, imagining that I am one of the lucky reporters whose job it is to analyze the game for a living.

As the playoffs were nearing, the stadium was open to the public on this particular day, airing the game against the ever hated Giants where they were competing for a Wild Card spot. The tour guide let us soak in a few minutes of the game while in the press box, not only because this is a unique occurrence, but to let Vin Scully’s voice fill the air in his second to last broadcast ever.

Vin Scully was the longest tenured sportscaster to an individual team, having started with the Brooklyn Dodgers way back in 1950. To imagine that his career started six years after WWII, and that he is just retiring is almost as magnificent as the magnitude of his impact on so many baseball fans across America. As someone who sobbed for days after the death of legendary Phillies broadcaster, Harry Kalas, I fully appreciate the effects that a great announcer can have on your entire perception of the game and the positive feelings and memories the sound of their voice can invoke. The enthusiasm, character and distinct voice of Vin Scully came to define the sport itself for Dodger fans and were greatly appreciated by baseball fans across the nation. So to hear his voice booming through the stadium in real time was pretty cool. 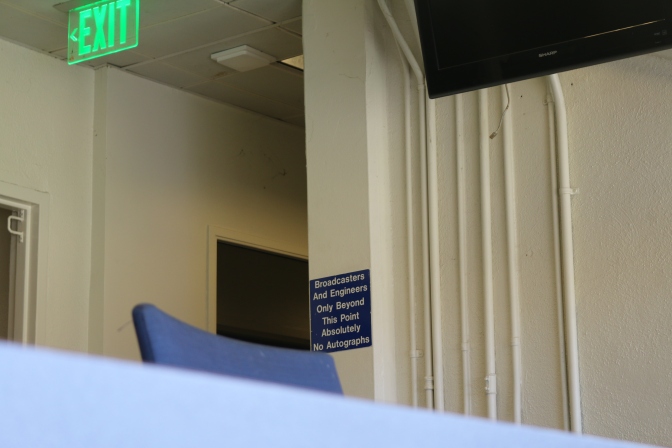 We then moved on to check out some club boxes, which were pretty nice, though admittedly not the nicest I’ve seen. I personally think a sporting event is best enjoyed out in the crowd anyway, but to each his own.

Then, the most exciting part, we were taken down the halls right out onto the field! Well, we weren’t allowed on the grass but the warning track was plenty big and allowed us to get a good feel for what it feels like to be a player down there in front of 50,000 people! The grass was a beautifully manicured, bright green and even the dirt on the warning track had a velvety texture to it that made me want to just roll around in it!

We were able to head down into the dugout as well, to get an even better feel for what the players experience during a game. I’m not sure why I was surprised by how dirty the benches were, but it certainly made it feel authentic. I was also excited to drink from the same water fountain Chase Utley had used just days before! 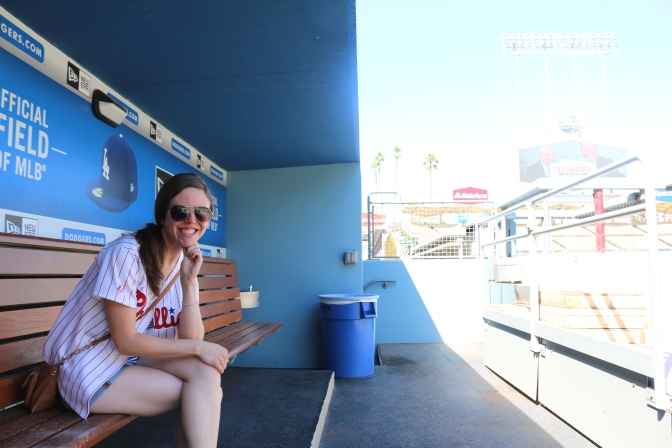 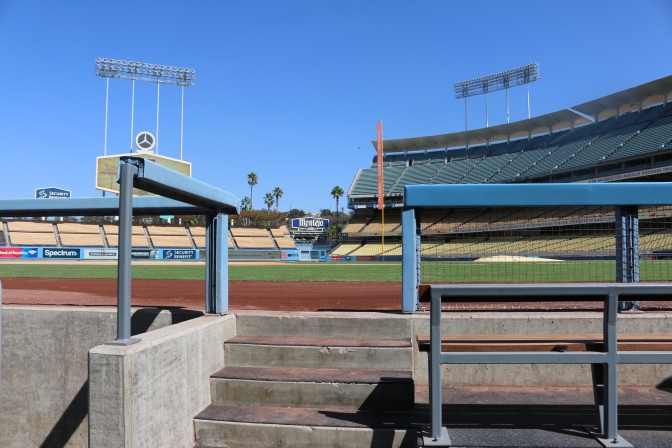 After a few more moments taking it in down on the field, we were then taken past some unique memorabilia and into the former visiting team’s locker room, which the tour guide declared his favorite part of the tour, and rightfully so. To imagine the number of legendary players to have used that locker room over the years certainly gave you goosebumps! 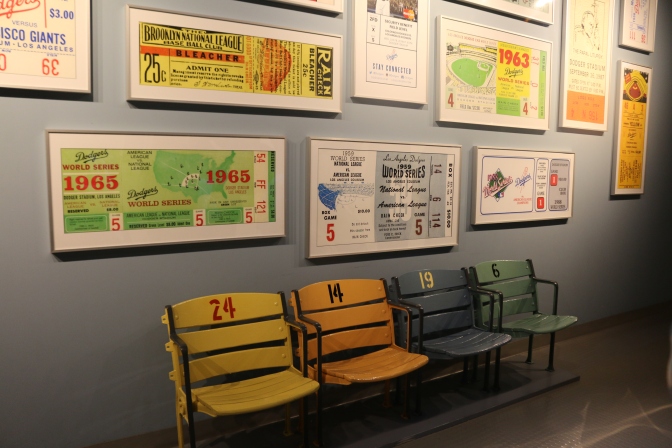 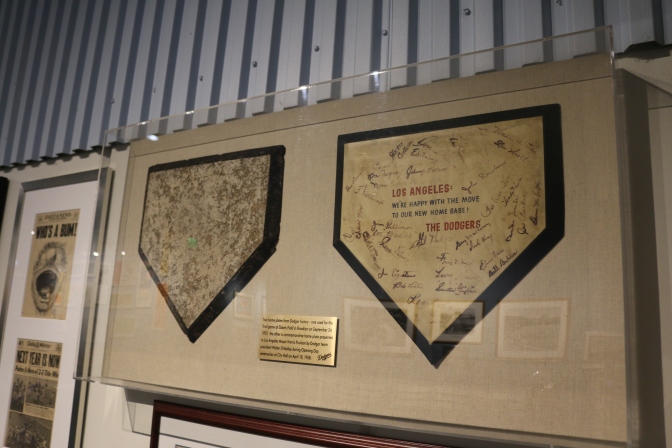 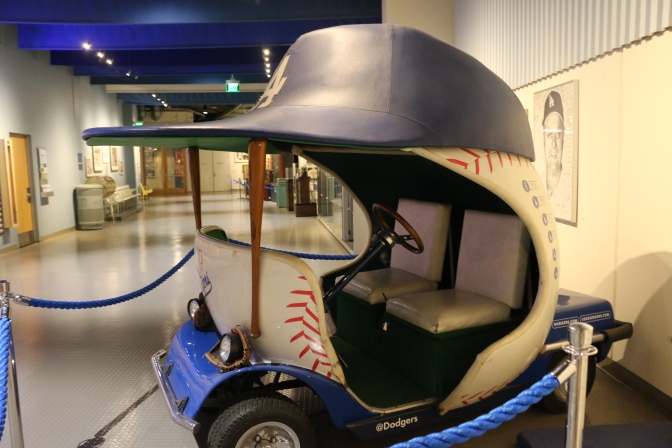 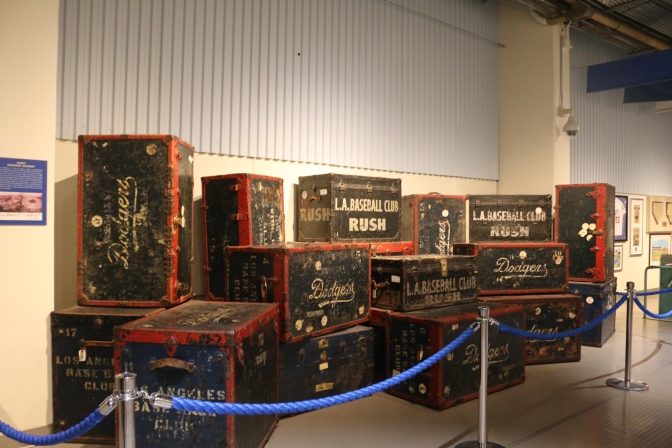 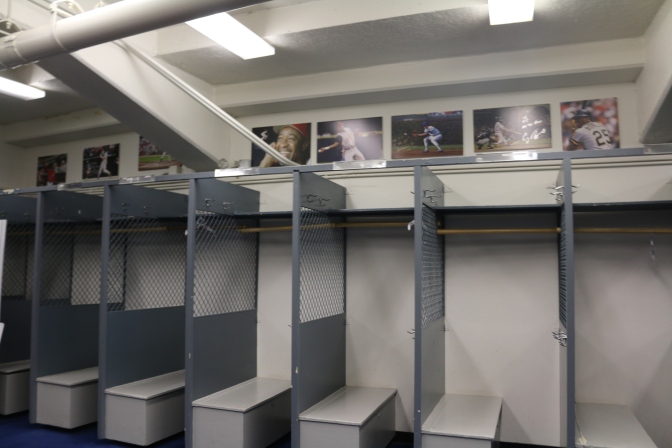 One of the most impressive parts of the tour was when we were taken through the room meant to inspire the team as they passed through. This room held huge, brightly lit cases of all of the Golden Gloves, MVP awards and the two existing World Series trophies all sparkling under the lights. It again drove home the impressive and lengthy history of the team and its star players over the years!

A few other stops around the stadium rounded out the ninety-minute tour. Overall, the tour was very well paced and covered a lot of ground. Our tour guides were extremely entertaining and knowledgeable as well, giving us a lot of information that was interesting even to non-Dodger fans – way more than I was able to describe here! If you are in town and a baseball fan, I’d highly recommend checking it out, perhaps even over a game if your team is not in town. Admission is $20/adult, and they run at 10am, 11:30am, and 1pm daily, unless there is a home game, in which only the 10am tour is held.