During our week long stay at Mora Campground on the Pacific coast in Olympic National Park, we visited the three primary natural beaches in La Push, WA, called First, Second, and Third Beaches (everyone marvels at the creative names). All three beaches are close to one another but are not accessible going directly one to another. You have to park at each individual beach and walk down from the parking lot. They also allow overnight camping at each beach.

Home to the Quilete Native American tribe, this area is known for being great for wildlife sightings and just being plain beautiful. Winters bring, wet weather, intriguing fog, and rough seas to this area, and summers are drier and milder, but rarely do temperatures reach above eighty degrees and wetsuits are recommended to enjoy the water. Though they differ from the warmer beaches we are used to back East, we were lucky to have temperatures in the low to mid seventies and they still made for very enjoyable and relaxing days during our stay.

All three beaches are situated along the same road, with individual parking lots for each, and First Beach being the farthest along LaPush Road. We started with Second Beach, however, as we had heard the most about it. Getting to the water requires a 0.7 mile hike through the woods with an elevation gain around 200 feet. It is a nice walk though through an old growth forest that reminded us a bit of the Hoh Rainforest.

As you descend the stairs near the end of the trail, you can start to hear the rush of the ocean through the trees.

There is then a good amount of large driftwood to climb over before you are rewarded with this scenic beach. We are not sure if they leave driftwood near the entrance because the beaches are meant to be untouched or because they help with erosion. Either way, when we first arrived, the beach was extremely foggy and had that Pacific Northwest Coast mystical quality to it that makes it easy to understand why Stephanie Meyer would use it as a setting for the “Twilight” series (which, by the way, is hard to miss while out in this area as there are whole stores dedictaed to merchandise and tours for the movie).

As the fog cleared, we got better and better views of the tree-dotted seastacks that make these beaches so distinct, as well as the natural arch down the one end. The tide was luckily low as we had been told that at high tide, there is not much beach to sit on. The ocean was plenty active though and we were able to watch it crash on the rocks and I was able to finally officially feel the Pacific Ocean for the first time! 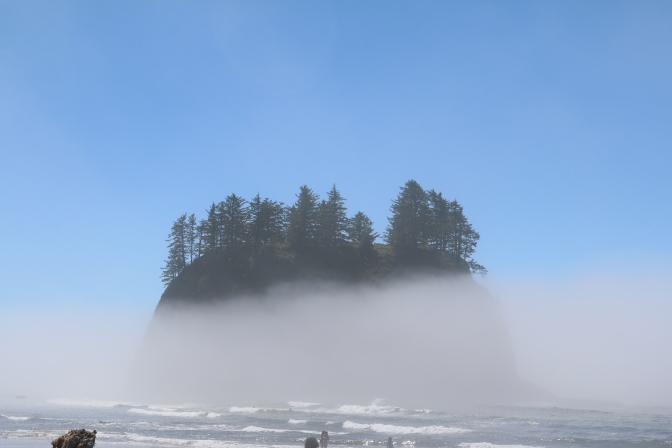 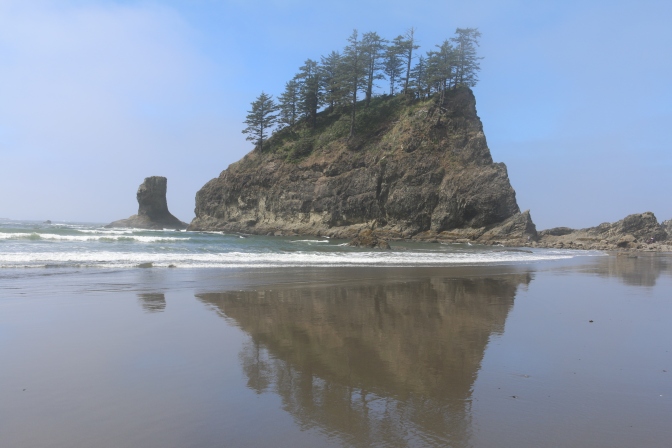 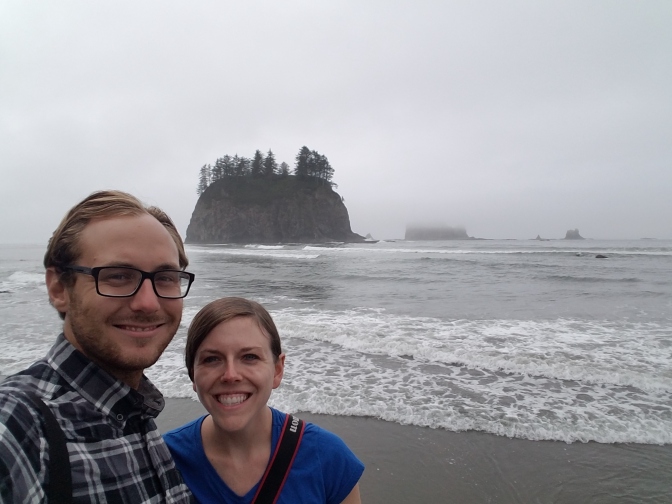 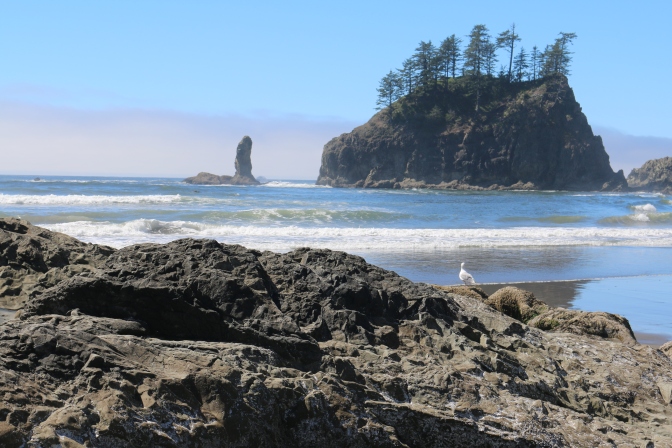 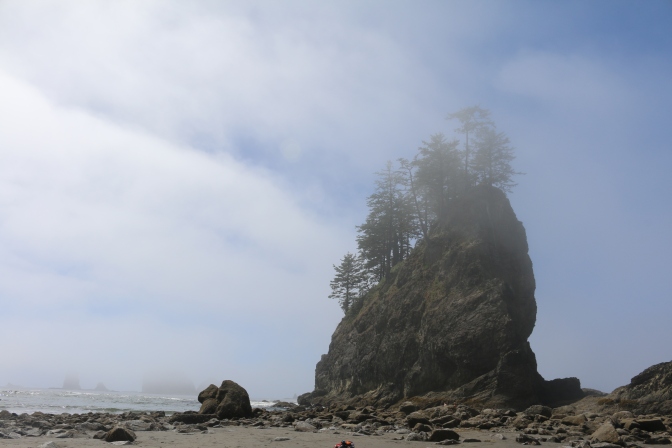 We sat on a driftwood for a while before walking up the beach to check the rest of it out. I personally really liked this beach because it had softer sand and few rocks, so I was able to take off my shoes, unlike most other beaches in the Northwest that are very rocky or covered with a lot of debris and marine life. Don’t get me wrong, the latter is great in its own right, but there’s just something to being able to comfortably walk barefoot in the sand while sticking your toes in the water. The water was cold, but after one or two seconds of cramping, I got pretty used to it as I got moving. Overall, it was a beautiful day that seemed to offer all the best of what the area beaches offer.

Though Second Beach was gorgeous, Third Beach was really our favorite of the three beaches. This was probably due to the scarcity of people we saw on the beach by comparison due to the hike down being 1.4 miles each way. The hike was not bad though and more even than the hike to Second Beach. The driftwood was a bit bigger to climb over, but not too terribly different. 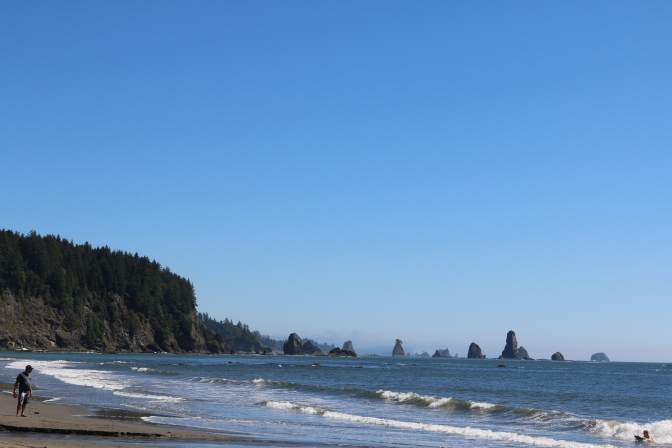 The beach itself is simple, with small seastacks off to the sides and in the distance and an overall feeling that left me feeling like this is what West Coast beaches are supposed to feel like. Both ends were capped with steep bluffs on which waves crashed thunderously, and the dense woods were at our back. This day was the warmest and it was quite comfortable to walk with our toes in the water up and down the beach. This beach again had the softer sand we are accustomed to and was relatively clear, excepting for some small crabs and unusual, small gelatinous creatures that we have yet to identify, but are guessing are some sort of jellyfish. 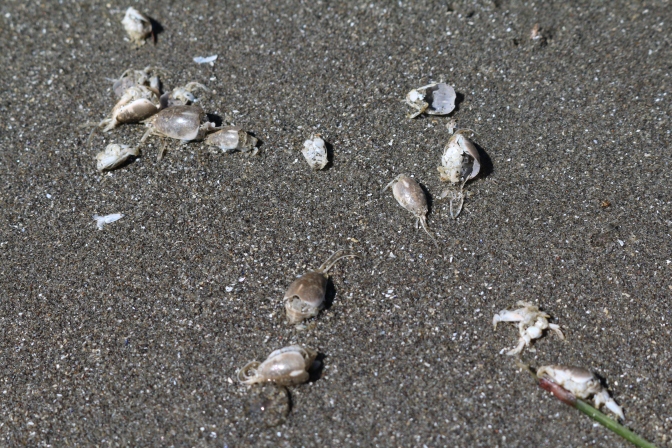 To complete the trifecta, we visited First Beach on our last day on the coast. This has a tendency to be the busiest of all three, due to the fact that the parking lot is right up against the beach and it is easily accessible. It also serves as the backdrop for the local cabin and RV resort run by the Quilete tribe. It seemed as though visitors kept their visit pretty brief though, as we never saw the parkng lot fill up and saw many people walk up just to take a few photos.

This beach was beautiful in its own right, with seastacks and a jetty off to the right, enclosing a large fishing marina. The sand was a bit rockier on this beach, but it was still a very nice day to sit and take in the sea air. 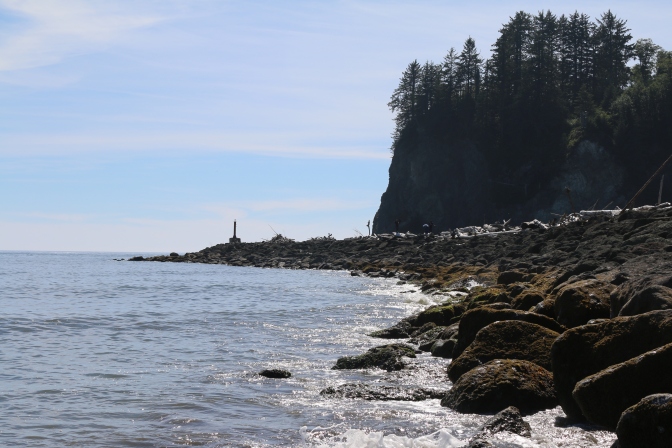 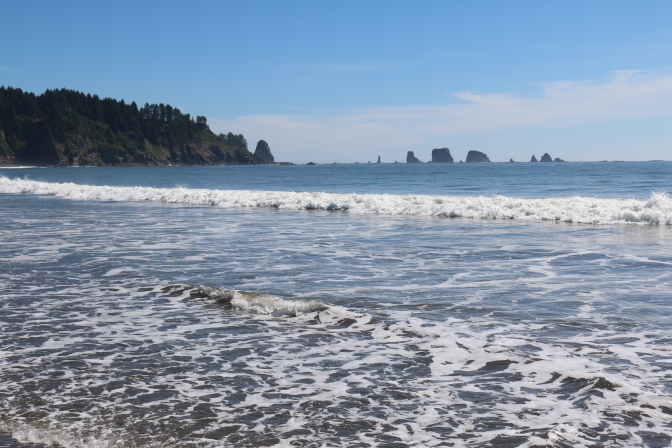 We feel very fortunate that we were able to spend entire days at each of these beautiful beaches. That is certainly one of the best parts of this long trip, that we get to take our time experiencing things only the locals may typically be able to.