After a brief visit a few days earlier, we decided to head back to the Dungeness Spit to do the ten mile round trip hike out to the lighthouse. Part of the national parks system, this wildlife preserve is the longest sand spit in the U.S. and fourth longest in the world, having grown an additional 0.5 miles out into the Strait of Juan de Fuca since the lighthouse was formed.

The spit is located in Sequim, WA, known for being relatively dry and a few degrees warmer than the rest of the peninsula, otherwise known as “Sunny Sequim”. There are several lavender and berry farms nearby, so we decided to stop at Graysmarsh Berry Farm to pick some blueberries and blackberries before we got there. The blueberries were especially sweet and beautiful! Very reasonably priced, too, when you pick them yourself!

When we arrived at the Spit, we placed our national parks pass on our dashboard and filled out the envelope at the gate. The hike begins on a short, 0.5 mile hike either on a paved trail or through the woods; we took the latter, which was very flat and accessible, but much less crowded. Plus, it felt like we were walking through a rainforest, it was so green and lush.

We then reached a view of the bay and the Strait of Juan de Fuca, which were beautiful washing up on the shore and bluffs to our left. There are tons of large driftwood pieces lining the spit that are whitewashed from the sun, some having beautiful, winding roots still attached.

The walk on the beach was fairly leisurely, but definitely a little more challenging than expected! We happened to be going as the tide was coming in, so we couldn’t walk on the harder, packed down sand, but instead had to walk on a variety of rocks, dried kelp, and softer sand, which can definitely tire you out a little faster.

Approximately fifteen minutes into our walk, we noticed there weren’t too many people around. We passed a handful of other walkers on our trip out, but it was clear that many people just enjoy the beach closer to the parking lot. As the tide was coming in, the waves crashed pretty hard on the shore next to us, shifting around the rocks and pebbles on shore, but we never felt like we were going to lose enough land to get back. We just took in the sights and some of the sea life along the way, including a ton of kelp. 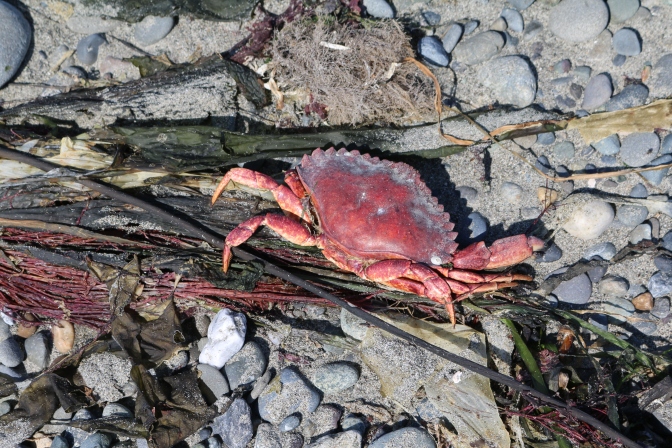 We walked for a couple of miles before even spotting the lighthouse, but it was a pretty sight when we did. 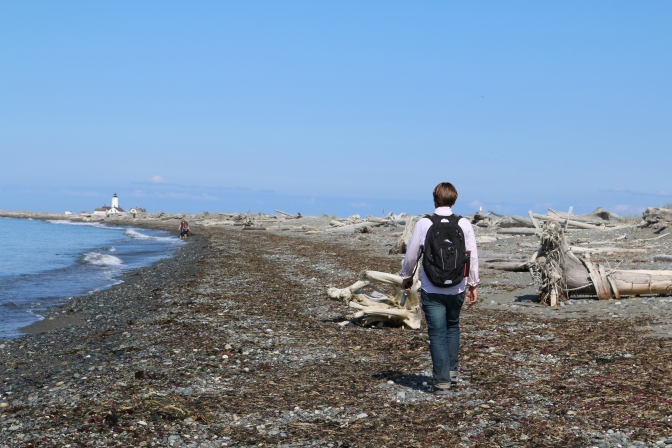 The only downside to seeing the lighthouse in the distance is that we kept feeling like we should be able to walk right up to it, but were actually still a few miles away. It was a great walk though, just being surrounded by water and feeling very secluded, save for all of the seagulls and shorebirds.

We reached the lighthouse just in time before they closed it to tours for the day. The lighthouse, formerly managed by the U.S. Coast Guard, has been managed by volunteers since 1994, who saved the structure from being torn down. As lighthouses really don’t have much utility anymore, it seems that most are often saved and preserved by local communities – and rightfully so, as they really do add charm to any seashore.

The house that formerly housed lighthouse keepers. Now what the volunteers stay in. 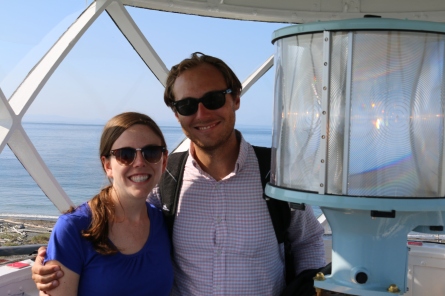 View from the top!

The volunteers who took us up in the lighthouse were staying in the adjacent house, which used to be the residence for the lighthouse keepers. Nowadays, anyone can stay in the house for a week for a fee that goes to funding the lighthouse society. It was a pretty neat setup, as we were told that the house had antique furniture, full utilities, and even internet! Plus a fantastic view and almost total seclusion to get away for a few days. The only catch is that volunteers are asked to show any hikers around the lighthouse, clean and maintain the house and property while they are there. A pretty clever way to manage the property if you ask me!

As the very tip of the spit and the bay side are closed to the public to preserve wildlife habitat, we turned back at the lighthouse to go the way we came. On the walk back, we spotted some seals not too far from shore. The volunteer told us that the dense underwater kelp forest in the area attracts lots of seals, otters, salmon, and occasionally, whales! We are pretty sure we fleetingly saw an orca on our walk but weren’t able to capture it…

We also had great views of the mountains and the water on our return walk as the setting sun cast a pretty haze over everything.

All in, it took us about five hours with a steady walk, stopping for pictures, to eat some snacks and to tour the lighthouse, but it was worth it. A certainly unique way to spend an afternoon and continue to get a feel for the amazing Olympic Peninsula!

We then returned back to our campsite at Salt Creek Recreation Area to a gorgeous sunset over the Strait..

2 thoughts on “Hiking Out to the Dungeness Lighthouse”