The first thing we made reservations for more than a day in advance (a week to be exact) so far on the trip was to buy tickets to see Dead & Company at the Gorge Ampitheatre in George, WA. Dead & Co. consists of most of the remaining members of the Grateful Dead, plus John Mayer. The Gorge Ampitheatre, or “The Gorge at George”, as some call it, is widely known as one of the more scenic venues in the U.S., overlooking the beautiful Columbia River Gorge.

We were pretty stoked that we could get tickets on such short notice and that there was a campground right on site at the venue! We reserved a spot in “premier camping”, the price of which was a good amount steeper than what we had been paying for campgrounds at $100 for two nights. But was worth it to not have to worry about driving from a far away campground, plus we figured it would allow us to take in the experience that much better.

We arrived at the venue on Friday afternoon around 2:30pm and got in the short line of campers waiting to get in. When they let us in at 3pm, we sure were glad that we reserved “premier camping” as the “general camping” spots weren’t much bigger than regular parking spaces. We would have had to pretty much wait for everyone around us to leave to be able to get out of there! And we’d be lucky if we had been able to put out our slide – no bueno. We saw a few RV’s in there and felt their pain. We instead got one of the first few spots in our section and were lucky enough be right near the bathrooms; not a necessity for us as we obviously have our own potty room, but they also had a line of shower rooms – which were surprisingly clean and plentiful! – that were also very close to us. You might be thinking there’d be drawbacks to being by the bathrooms, but it was either this or be near a bunch of port-a-potties, so this was definitely the better option.

The crowd was tame for the most part, but everyone seemed to be enjoying themselves. We were told by others who had camped there before that it wasn’t nearly as full as usual, but it seemed lively and full enough for us! We made friends with our neighbors, who were happy to share their past concert experiences and recommendations for things to see in the Pacific Northwest. And we were happy to share the shade from our awning with them!

The first night was pretty relaxed and not too hot. The next day, the tailgating started to feel a little more lively but no one was really rowdy. There were a good amount of hawkers, including kids, trying to sell everything from tiedye shirts to custom glassware to iPhone cases site to site, but other than that, it was a chill atmosphere and everyone seemed really happy to be there. We kept anticipating being super hot as there was no shade and we couldn’t use our AC, but a consistent breeze and some creative maneuvering kept us cool and in the shade up until showtime.

To move around a bit, we checked out the vendors in the general camping area, which were kind of neat. This area seemed to be even more what you’d expect out of a Dead show, lots of VW buses and colorful tenting alcoves playing Dead songs. 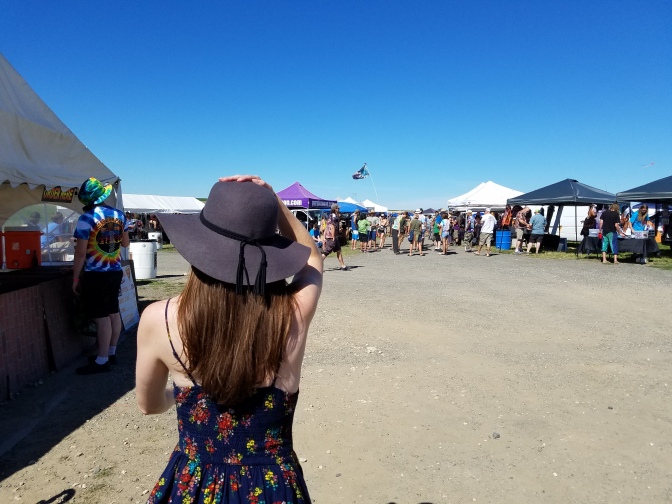 About an hour before the show, we caught the shuttle bus that ran from our campground to the venue. When we arrived, there was a quick security check and then we were thrown deeper into the sea of tiedye, fringe and flowers that make up a Deadhead audience. We were surprised that young people made up a significant amount of the crowd, too, if not the majority. Having both seen a good number of artists with an older average fan age (okay, for me, that’s most of the shows I see), we sort of expected the same here and were pleasantly surprised. We weren’t sure if it was due to the venue, John Mayer, or that West Coast kids just have good taste in music… 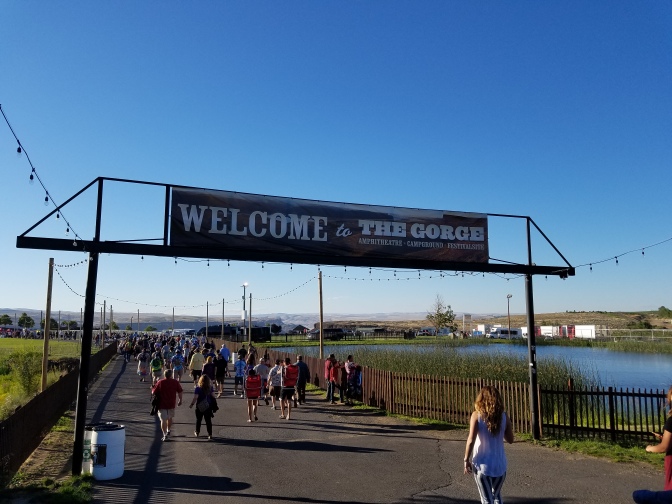 We were able to scope out a spot in the general admission section and laid down my tiedye blue University of Delaware blanket to sit on – the closest thing I had to tiedye. The view was pretty spectacular, overlooking the basalt gorge walls and the Columbia River as a backdrop to the stage. 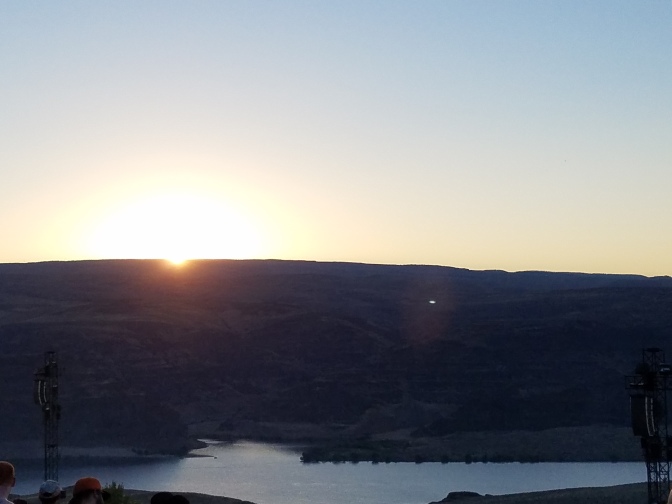 The entire venue was open, with nothing under cover except for the vendors in their own little stands. My only beef with the venue was that it didn’t appear to have any flush toilets, only port-a-potties. Not sure how you have flush toilets at the campground but not at the venue, but whatev’s.

The show started about fifteen minutes late, and opened with “Touch of Grey”. Bob Weir and John Mayer switched off on lead vocals, as they did for most of the show, at least from song to song. John Mayer’s bluesy guitar work was present throughout, and overall their sounds blended together almost as if he’d always been with the band. As someone who got made fun of for liking John Mayer back in the day by people who had never listened to more than “Your Body is a Wonderland”, I felt even further validated that he really is a good musician.

The band played a good number of hit songs throughout the show, putting different twists in the renditions as they have always known to do.

I had heard a really good joke recently that went, “I went to a Dead show and it was seven hours long. Best song I’ve ever heard.”

While each song wasn’t quite as long a marathon, they still lived up to their reputation for jam sessions. Including a forty-five minute intermission, the show went on for three and a quarter hours, ending with a pretty cover of “Knocking on Heaven’s Door”. As the show went on, the crowd had gotten more into it, with the majority of the lawn even standing for the better part of the second half of the show. I loved this as I have a really hard time sitting down at concerts but sometimes feel awkward blocking the people behind me as I pull out my not always pretty dance moves. (Unless it’s a Springsteen show, then there’s no remorse…)

Overall though, this weekend seemed to fit perfectly with our current rogue RV traveling experience.

I could almost relate the feeling of what it was like to be a hippie back in the day, part of an almost counterculture of people not playing by the traditional rules. Though we feel that a good amount of preparation and thought went into planning our trip, it has certainly felt more liberating than anything we’ve ever experienced to just be able to wake up and go where the wind takes us on any given day. To not have any set plans or itineraries, just the desire to make the most of our time and enjoy life and each other. When I was working, I would always jokingly answer when people asked how I was doing that I was “living the dream”, and for now, I can legitimately say that I am.

2 thoughts on “Channeling Our Inner Hippies: Dead & Co. and Camping at “The Gorge at George””