We awoke our first morning in Indianapolis to a crowing rooster and geese honking from a nearby pond. After an easy morning, we decided to take a few of the recommendations from my cousins on things to explore and headed over to the Sun King Brewery in downtown Indy. It was a very cool tasting room, being right within the brewery itself. Our favorite beer that we tasted was the Wee Mac Scottish-Style Ale for those of you that are interested in local craft beers!

They also had table games out and John retaught me how to play chess (I haven’t played since I was probably twelve, but think I put up a good effort!).

We then decided to head back and get some things done due to some heavy rain and storms. We also got to see my cousins in action at their environmental graphics, sign, and logo printing business, which was awesome! Please check out their Etsy stores when you get the chance – KRSinspirations, KRSgraphics, as well as their  business graphic services –  Key Reflection Studios – they offer some really great products and designs to decorate your home or business!

Later in the day, we walked around the up and coming neighborhood of Fountain Square, which felt similar in some ways to the area we came from in Philadelphia. We walked around to find a lot of unique houses, mostly small ones, many of them rehabbed, along with some larger, very modern and funky style houses, like this one..

After grabbing a quick beer at a place nearby called Pioneer, we played some duckpin bowling at the historic Fountain Square Theatre Building. Besides the fountain, this is one of the main focal points of the neighborhood that contains a hall, some bars and restaurants, a rooftop deck, and two bowling alleys from what we could tell.

Duckpin bowling is an old-fashioned style of bowling with smaller pins and smaller balls without holes for your fingers. You also keep your own score, which could be a little bit of a challenge at times, but wasn’t too bad, and overall it was really fun. An employee informed us that this alley had been continuously operational since the 1920s, with the exception of the ’80s and early ’90s. It was decorated with memorabilia and restored authentic furnishing from the ’20s and being on the fourth floor, had some nice views of downtown.

We also got to peek our heads in the other duckpin alley in the basement that actually used to be a speakeasy, but is currently decked out with authentic 1950s duckpin bowling decor. This place really made us feel like we were in another era! To top it off, another employee showed us a secret elevator and underground hallway that were once used for entrance into the speakeasy, which was really cool to see. She also explained that this neighborhood was a significant throughfare for the Underground Railroad. Who knew Fountain Square had such history!

We wrapped up the night with nachos and some drinks at the tiki bar in the back of a watering hole called Revolucion across the street to enjoy what had turned out to be a beautiful night. Very cute place! 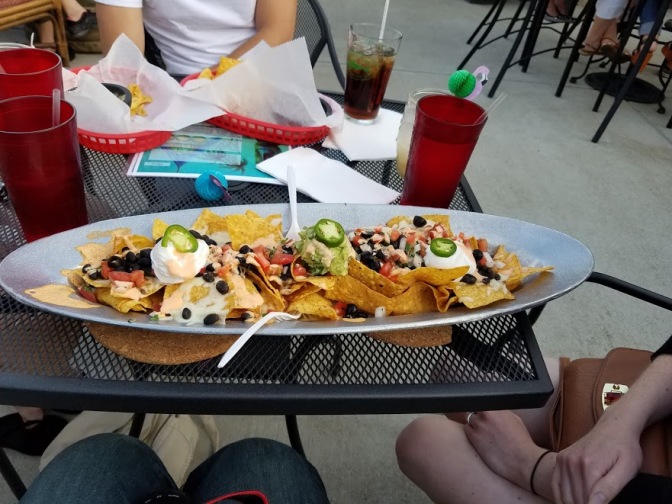 We then walked back to the truck (parking was free and plentiful in this neighborhood, by the way, something we are not terribly used to in Philadelphia!), and drove home exhausted. We will see if we have the energy to check out Carb Day tomorrow at the Indy 500 or whether we want to explore downtown a little more…