Talkeetna is a small, character-filled town about mid-way between Denali National Park and Anchorage, a few minutes off the Parks Highway. It is best known as a jumping off point for Denali climbers and for superb flightseeing tours due to its strategic location that is really not far from the peak as the crow flies (or as the raven flies, as we’ve heard them say out here!). It’s also famous for having a cat for a mayor, but more on that later…

Camping options were fairly limited in town, so we settled on a popular boondocking site on the banks of the north side of the Susistna River just before the turn for the Talkeetna spur off of George Parks Highway. It was fairly raucous near the 4th of July, with tons of locals riding the ATV trails, boating, and congregating at their sites, but it made for a fun party atmosphere as everyone got along and carved out their space. The driveway in was a little hairy, but we took it slow and it was a wide, solid riverbank from there.

We ventured into Talkeetna on a cloudy day to walk around town. Our first stop was at Kahiltna Birchworks on the spur road. I think we actually read about it in the book by Moon publishing, Denali, Anchorage, and the Kenai Peninsula (which we’d highly recommend), and upon seeing the words, “birch ice cream”, it made our itinerary. It turned out to be an awesome family business started by a couple from the Mid-Atlantic region, and the wife was a fellow University of Delaware alum. They previously ran their business from their homestead thirty miles from the nearest road, where they had an abundance of birch trees to tap and lived a quite secluded, but exciting sounding life. They’ve recently moved to Talkeetna, where the family and a small staff have an intense three-week window a year to tap the trees and produce the syrup, which is said to be healthier than its maple cousin. We were shown a short video, given a background on the business and a complementary syrup tasting, which was super yummy! The 100 gallons they produce a year of Kahiltna Gold age like a fine wine, developing a stronger flavor as time goes on. They sell it at different life stages, but we liked the late harvest best and bought a small bottle of it. And we didn’t forget the ice cream – their birch and fireweed honey flavors were sooo good! 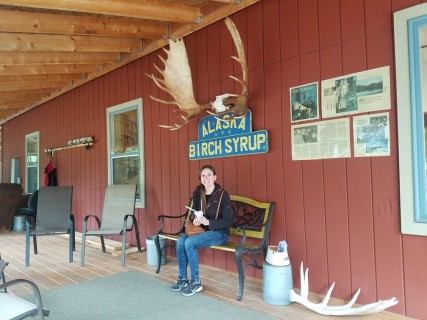 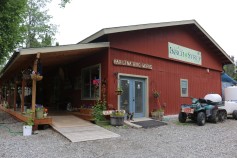 Around the very walkable downtown, gift shops, quirky photo ops and food choices abound. We stopped in Nagley’s store, where Stubbs, the unofficial “cat mayor” is said to frequent but we didn’t see him. They sold t-shirts that said he was 20 years old at this point, so we weren’t sure if he was still around and if he was, we wouldn’t want to bother him. Turned out he passed about a month later, but it sounded like he couldn’t have led a better life! 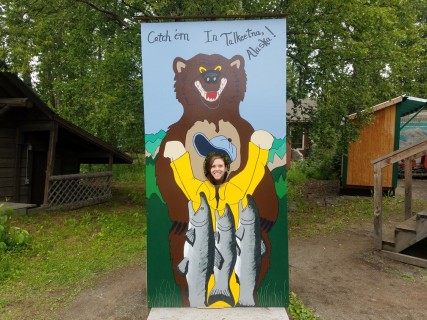 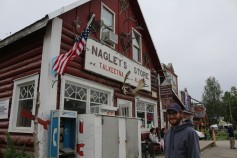 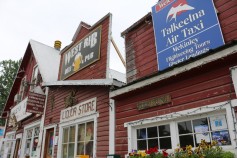 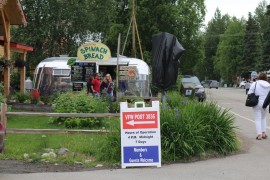 Unbeatable Views of Denali From the Air

A flightseeing tour of Denali was something we’d been debating for a few weeks – whether it was worth the money and especially, if we could get the weather and timing to cooperate for us. Flying in a tiny bush plane was also something I never really wanted to do but for something of this magnitude, I was willing to buck up and make an exception.

On our last day in Talkeetna, we woke up to beautiful, blue skies dotted with just a few clouds. We called to check availability with K2 Aviation, and they did indeed have some openings for the tour we wanted in early afternoon. Since the weather can change without warning, we decided we’d drive into town, hang out, and book if the weather seemed to be sustaining. Seeing this view on the drive in though had us on the phone right away to book.

K2 had a really nice property for those waiting for their flights. A cozy indoor seating area as well as a great porch and yard with a swingset and outdoor games made the time go by quickly as we watched the planes come and go. 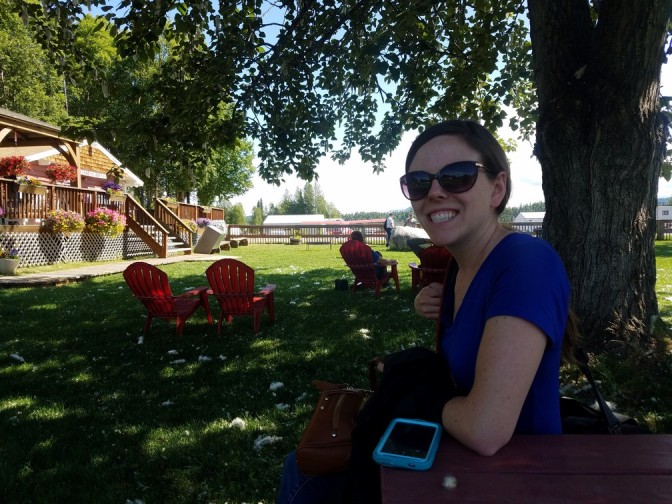 Then we were introduced to our ride, this baby, which held 10 people. We were to see MANY more bush and float planes during our time in Alaska!

We put on our headsets, buckled up, and were in the air before we knew it! We headed for the mountain with these views under us as we climbed. 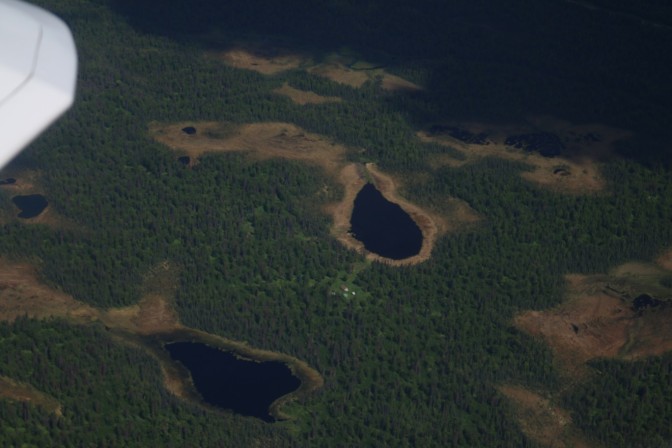 A few clouds were indeed obstructing the peak, but as we closed in on the high granite walls, glaciers spilling out as far as the eye could see, and unreal mounds of snow soon to surround us, we barely even noticed it was missing. Prepare yourself for an excessive number of pictures to follow; it was hard to choose when everything was breathtaking! 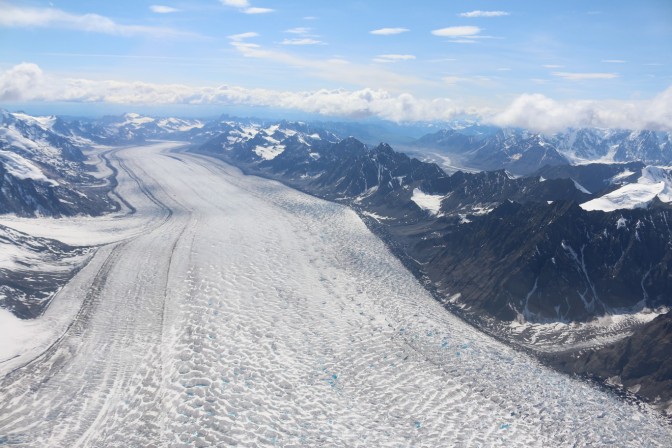 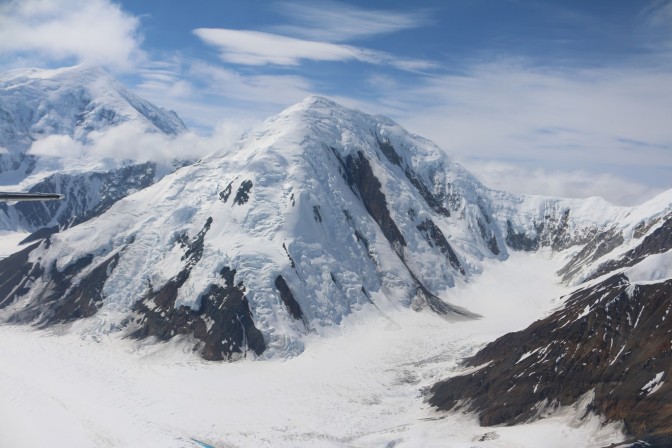 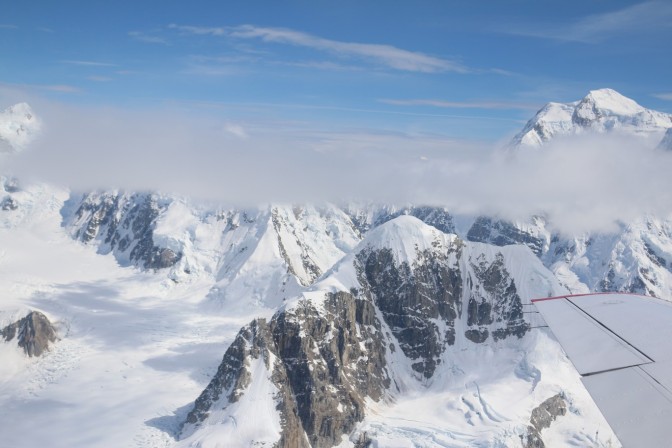 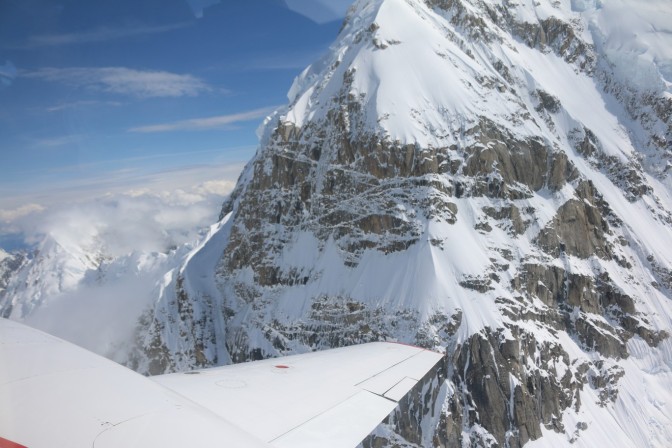 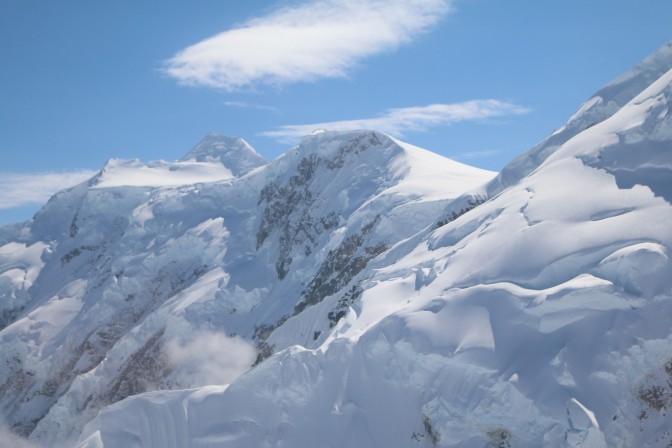 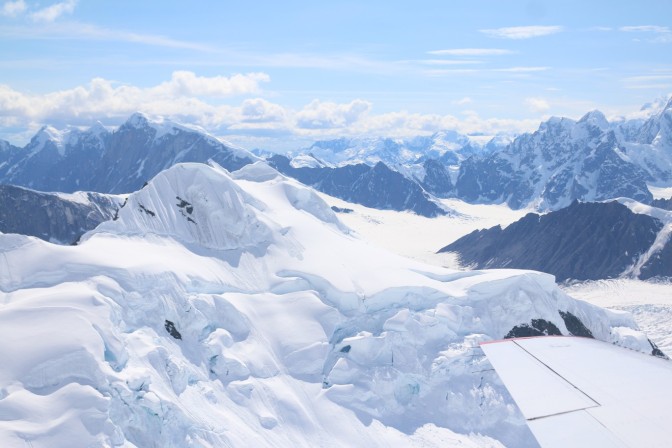 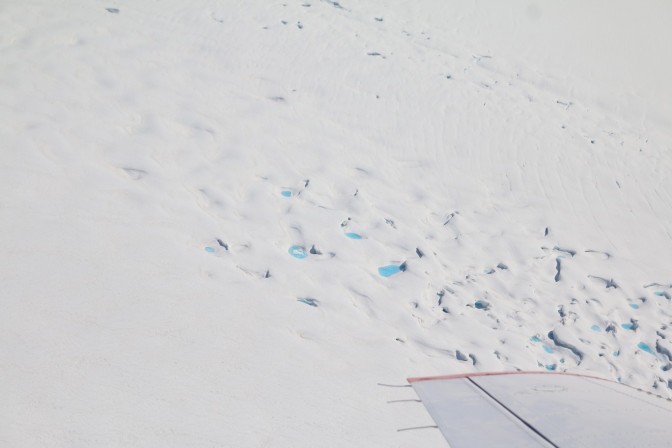 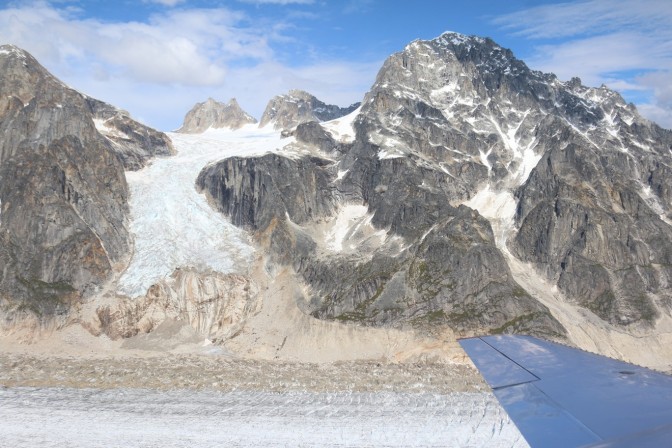 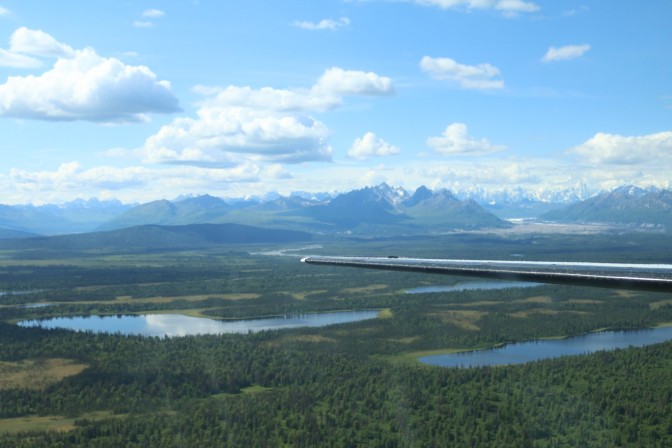 The hour and a half flight was over before we knew it, but the timing felt just about right. Taking in so much beauty was almost overwhelming! Plus, we both got a tad bit queasy and might not have lasted much longer. It was totally worth it though, and a completely different perspective than seeing Denali from the ground. Something we’ll truly never forget and which honestly almost has me a little choked up reflecting on how a place this beautiful can even exist in real life and that we were there. Hopefully we’ll be back there someday because saving up to rent out the Don Sheldon cabin for a couple of nights has now been added to our ultimate bucket list…

8 thoughts on “John and Katie’s Alaska RV Trip 2017: Mind-Boggling Views of Denali from the Air”