Mount Rainier is something to behold in Washington state. Not only is she on the license plates, the namesake for probably hundreds of area businesses, and recognizable to anyone in the area, but at an elevation of 14,416 feet, the largest peak in the Cascade range can look huge and majestic from many different parts of the state on a clear day. It is difficult to describe if you haven’t seen it in person. Here is a view of Rainier from Bainbridge Island, across the Puget Sound from Seattle, where she is still over two hours driving distance away!

So up close, Rainier just looks even bigger and more magnificent, almost to an unreal scale. An active volcano, the tip looks flatter up close as a large part of its peak was eroded in an eruption approximately 5,000 years ago, and small eruptions have been reported as recently as the 1800s. (This is not one we want to be around for the next big eruption, but luckily that doesn’t seem too imminent!) Covered in snow year round, Rainier also has a total of twenty-six glaciers sitting atop its peak, hence why you can only drive approximately half way up to the top.

The second highest, and most popular, spot you can drive to is called Paradise. Complete with a large visitor’s center and classic inn, Paradise also has a fair number of trails and even bigger views of the larger than life peak that cuts the sky 8000 feet above this spot. 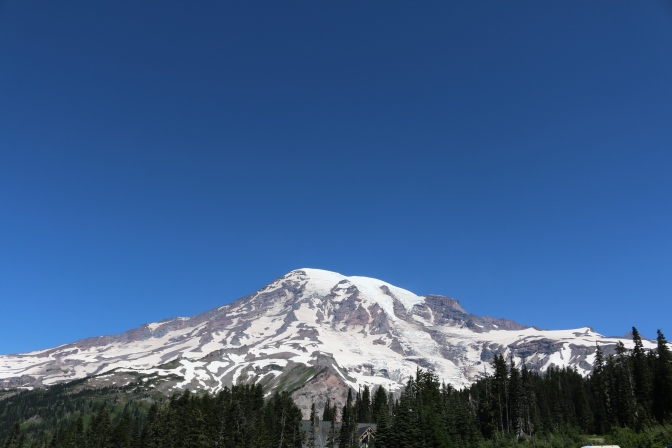 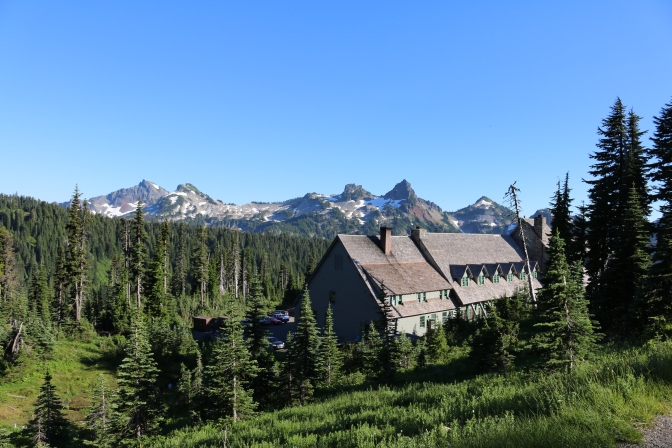 We decided to start with the Panorama Point trail, which has an elevation gain of 1200 feet via the Skyline Trail, the primary circular trail around this area that intersects other trails. A steady climb over the paved start had us working, but as long as we kept moving and caught our breath occasionally, we were fine.

The trail then started to climb rocky stairs, which also were not too bad and well maintained. We passed fields of wildflowers and enjoyed our view of the ever-growing peak, glaciers, and the rest of the breathtaking Cascade range. 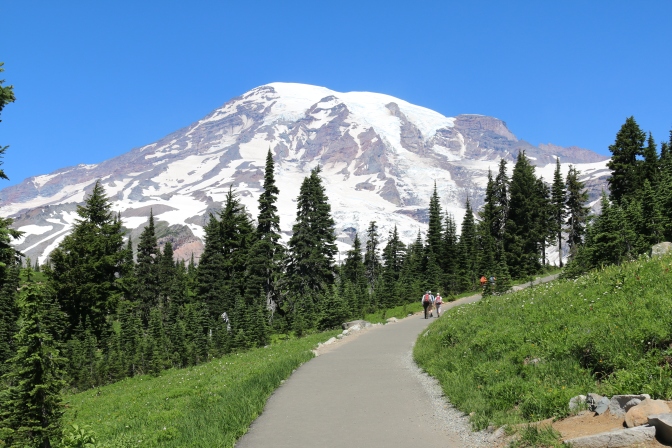 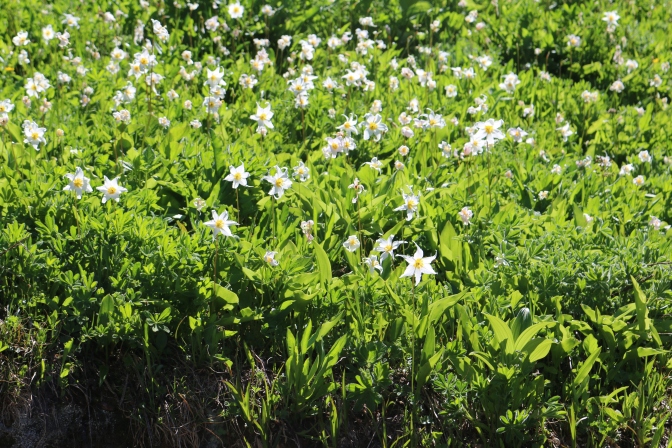 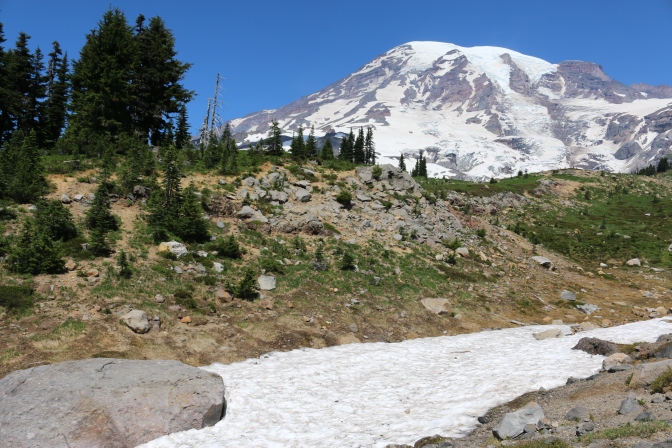 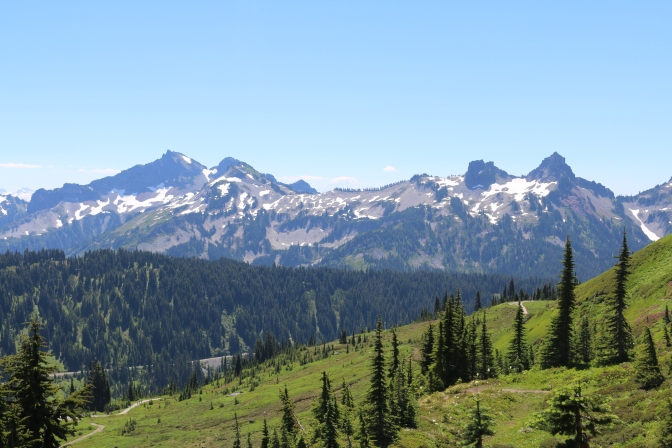 Eventually, we reached a part that almost seemed as if it could be our destination, but soon realized that the end of the trail actually laid a little bit farther, past a steep, somewhat narrow snowbank. As we watched people more equipped than us struggle to cross the snow along a small cliff, we and many other visitors decided to turn back, but not before enjoying the plenty spectacular views from where we were. Again, it’s hard to believe the peak is still 7,000 feet above us here! It looks like it is much closer in person.  It was awesome hearing the low thundering sounds of glaciers calving from this point, too! 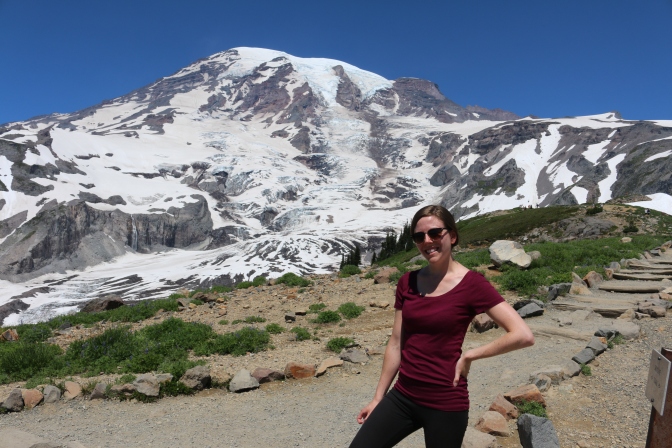 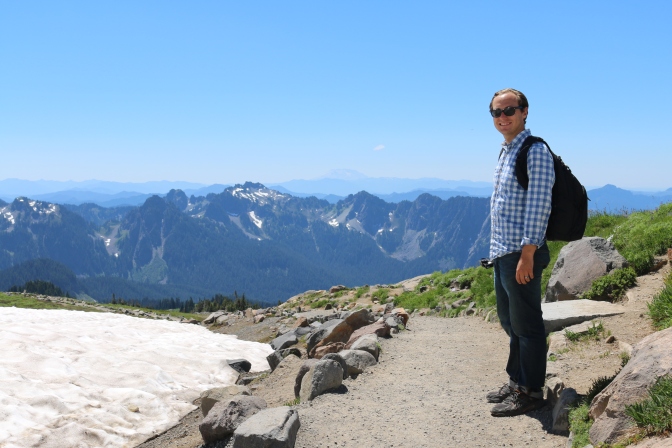 We tumbled our way back down the steep incline easily and took a detour off onto the Moraine Trail, a short, mile-long round trip hike that was recommended as one that would be secluded from the crowds and offer great views. Boy, was this accurate. The whole time, we only saw two other hikers on this quiet trail. Signs said that the trail was no longer maintained from a certain point, so it took us through a good amount of brush and we weren’t even certain at times that we were on the correct trail as there was another trail that ran parallel to it at times and even continued way past where we thought the trail was supposed to end. All in, I think we went farther than one mile round trip because of this.

The views were worth the detour though and it was kind of exciting feeling like we were on an unmarked trail. It was also nice to get away from the crowds. 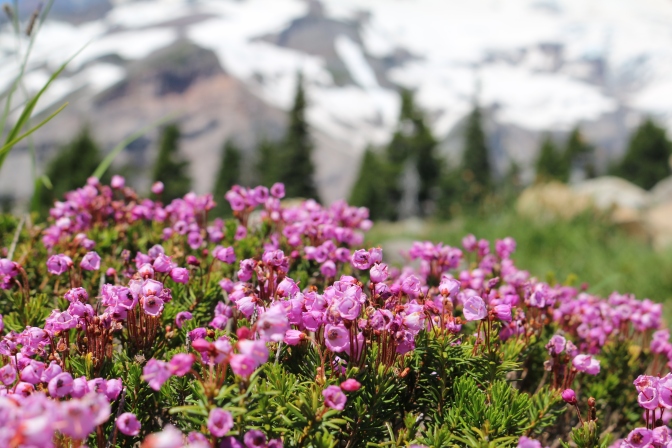 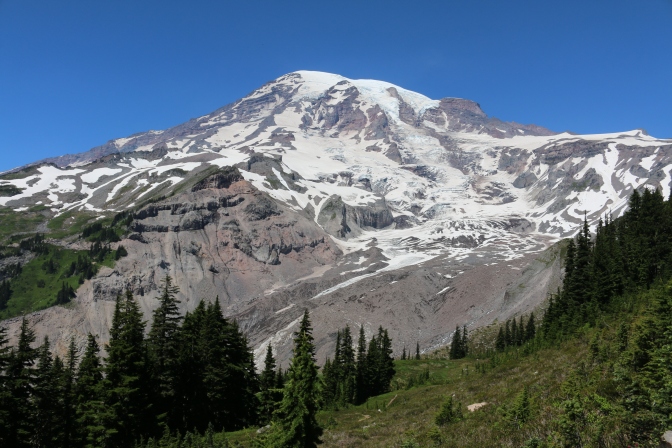 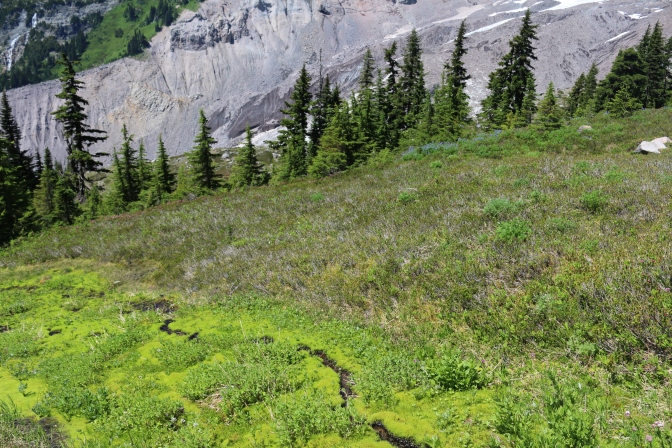 Feeling ambitious and like we still had an arsenal of energy, we took a break and then decided to take the Skyline Trail the other direction, toward Myrtle Falls, then take the Golden Gate Trail across and the Skyline Trail back. We were told by the park ranger we asked that the elevation wasn’t too bad, under 1000 feet, so we were expecting it to be a not too difficult walk through some wildflower fields and to see the other side of the Skyline Trail since we didn’t quite reach it with Panorama Point. This was pretty accurate, but we did need a little more energy than we had anticipated.

The Golden Gate Trail indeed led us through some very pretty wildflower fields, with the peak as a backdrop and more views of the Cascades behind us. It was definitely more of an incline than we were expecting though. We eventually hit a bunch of stairs that almost never seemed to end. We debated turning back since we had had a full day already but instead persisted. 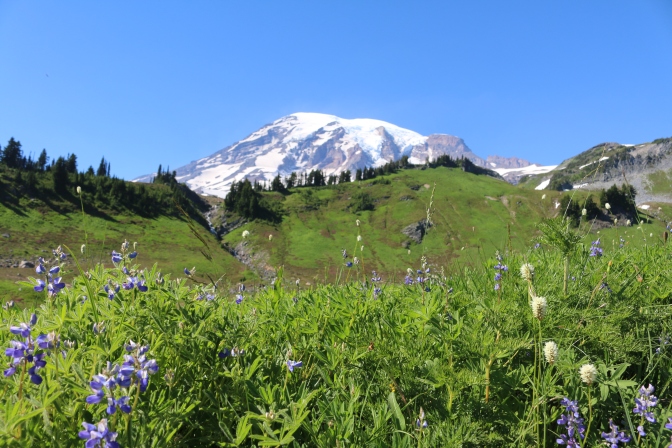 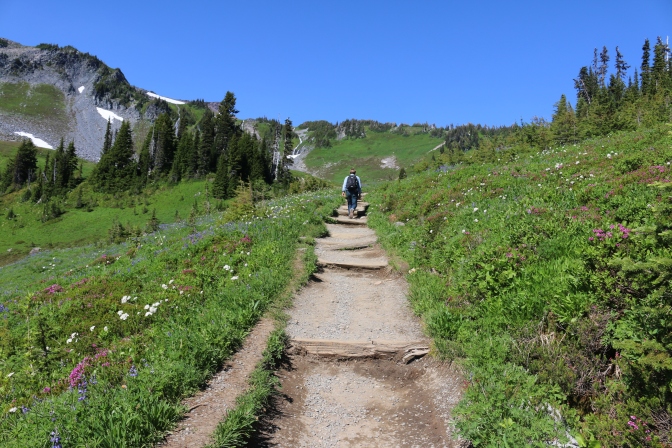 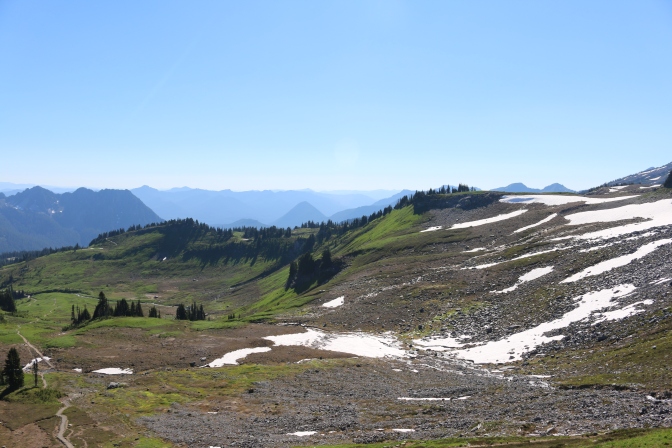 Once we reached the Skyline Trail, we got some great views.

We were also expecting an easy decline back to the visitor’s center. Instead, we were met with several somewhat unwelcome steep snowbanks that we had to carefully skid our way down and across. 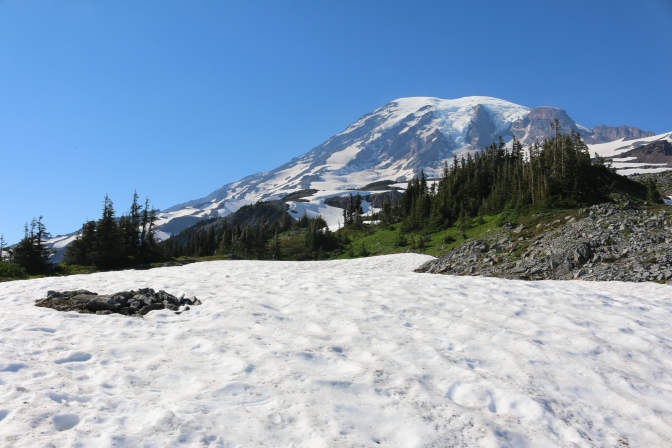 Once we were past the snow, we then encountered a wide stream that soaked almost everyone’s feet except John’s due to the depth of the water and the fact that the rocks were not laid out in a way that made them easy to step across. A kind young woman who was right in front of me offered to help me across since John was a little bit ahead (for the record, John does usually help me when needed!), but I still stepped in a ton of water!

Finally, we reached a point where the obstacles seemed to end and were able to finish the trail relatively easily, though not without a few more short inclines. At this point, we figured we had climbed at least 2700 feet total over at least eight or nine miles, though we weren’t even completely sure of those numbers since we skipped around a bit. As our biggest hikes have topped out around 2000 feet, this was a little more than we were used to and I could honestly barely move as I hobbled across the finish line into the visitor’s center parking lot. We felt like we had gotten the most out of Paradise though and didn’t feel like we needed to make the hour drive back each way from our campsite another day, which we were happy about. 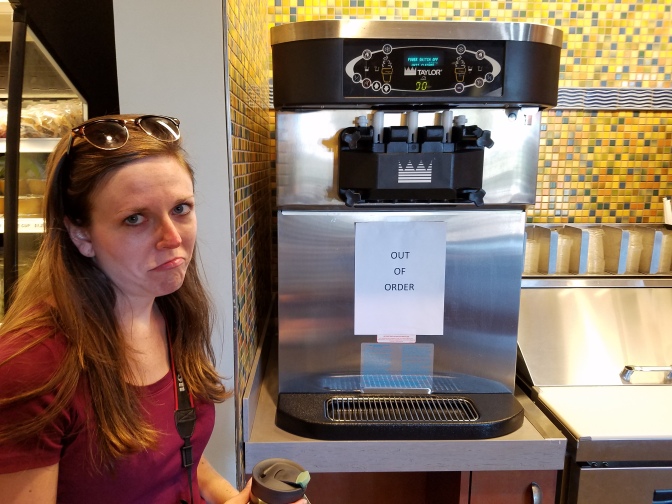 Our next day’s itinerary was to visit Sunrise, the very highest point you can drive to, as long as we had the energy…