We woke up in our last morning in Bozeman to a generous gift from our campsite neighbors of their last Yuengling beer and some chocolates, wishing us a happy honeymoon. That really lifted our spirits and reminded us of how nice most campers are!

We then visited the dump station and filled up on fresh water and headed to Eagle Creek Campground in Gardiner, MT, just outside the North Gate of Yellowstone. Originally planning to backtrack to the park from the Pacific Northwest in September, when you are supposedly able to avoid some of the crowds and it is sure to be beautiful, we decided to go now since we were so close and to avoid any chance of night time freezing temperatures as we neared the end of the season.

The drive took only about two hours, with the most excitement coming as we reached the base of Jardine Road, which our campground was on. After driving down the small main street of Gardiner, we reached the base of a steep, winding dirt road that led up a hill. It wasn’t too bad towing up it but we figured we’d have to take it slow coming back down.

We had chosen this campground as it was only $7/night as opposed to everywhere else that was $50 or more per night and may or may not have space available, and tight ones at that. This site had no hookups and only one drop toilet, but we had learned that we could pay to take showers at the Mammoth Hot Springs Hotel and figured our fresh water could get us pretty far if we were careful. And we had a huge site and a scenic view of mountains around us at that.

It was pretty late in the afternoon, but we figured we would venture into the mother of all national parks to see what we could see before the sun set. Coming in at the North Gate, we were able to pass under the original arch constructed under the direction of Teddy Roosevelt, which reads “for the benefit and enjoyment of the people”. 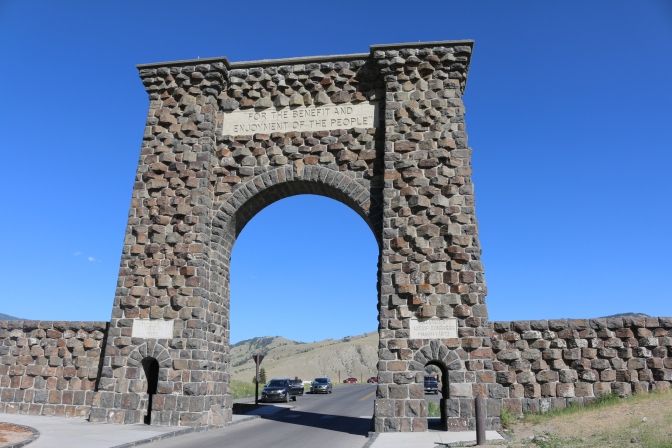 We then visited Mammoth Hot Springs, where we saw the infamous elk that like to spend time on the lawns near the hotel and living quarters. 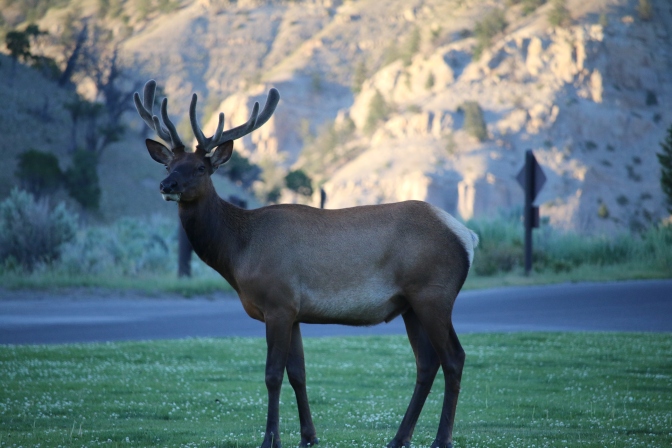 Our first sight was of the white, rocky travertine formations formed by limestone coming into contact with the carbonic acid in Mammoth’s hot springs. They were pretty other-worldly.

We also saw the Liberty Cap, formed by a once active thermal feature.

A little overwhelmed by the crowds on the walkway, we decided to then make the drive to Norris Geyser Basin. Along the way, we hit our first traffic jam of the trip, which we learned a half hour later was due to buffalo crossing the road.

At Norris, we perused some of the geyser and hot springs along the boardwalk trail. They really were fascinating and more exciting when we thought of them as part of one of Earth’s largest volcanic areas.

As it was getting late, we decided to get back, make dinner and consult some maps and books on the park to plan out our next day’s activities. Yellowstone seems so large that it is almost overwhelming deciding what to do! We didn’t leave though without seeing the first of many amazing sunsets in the area…

One thought on “Our First Taste of Yellowstone”